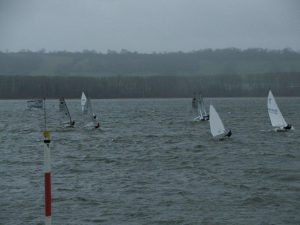 14 boats crossed the line for the start but with very strong winds it became a battle of survival.

Most boats sailed the wrong course from that indicated with the exception of Ben and Ross McGrane in their Merlin Rocket who went back and unwound themselves and Steve Smith in his Laser Radial who was so far back that he had the chance to look at the course board as he had no idea where he should be going. These then became the only 2 to get official prizes.

Prizes for the alternative race were awarded to the Flying Fifteen of “Caddy” and Mike Chapman, who despite a massive knock down on the reach from 7 to B sailed impressively as did Cameron Scott in his Laser who took the other prize.

This site uses cookies: Find out more.
Go to Top