41 members of Team Chew Lasers (plus a dog) enjoyed wonderful weather for this year’s annual Easter pilgrimage to Rock, Cornwall.  The sailing was a delight; and enriched as ever by the many other leisure activities and relaxation that the group enjoy around the Camel estuary each year.

2017 saw new recruits join in the fun.  Tom Hender, David Pryce, Felicity Jones, Anna Mason and David Hynes.  Dave P and Tom quickly became buddies; both ashore and afloat. Battling it out on the water and wasting no time in breaking the ice with a few drinks on Thursday evening!  Anna and Felicity joined Lizzie Cooke in the 4.7 fleet racing.  David Hynes brought wife Alice and baby Amelie down for the weekend; and gave Peter Sherwin and Julian Cooke a run for their money on the water to boot!

The weather was something else!  It felt like summer much of the time; warmth, sunshine and light to moderate breezes.  The group enjoyed activities such as coastal walks, cycling, beach games, stand up paddle-boarding, crabbing and even BBQs (yes the weather was that good!).

The group Laser sailing cruise out over the Doom Bar on Tuesday morning was a real highlight.  Beautiful to be part of I hear, as indeed it was to watch from the sandy coves of Daymer Bay.

The team got together throughout the holiday.  The social programme at the club combined with the 6pm ‘daily drink’ at the club bar provided great opportunity to share stories of the day and make plans for tomorrow!  Easter Sunday ‘tea and cakes’, this year at the Smith holiday household (once the Easter eggs had all been collected!), was alive with chatter.

In terms of the racing, well, it was close at the front between Julian Cooke, Peter Sherwin and David Hynes.  In the end, it all came down to the final race between Julian and Peter.  Julian’s better boatspeed around the course ultimately securing him the series; retaining the Bowden Trophy within the Cooke household for another year.

Beyond the front three there was plenty of close racing.  Amongst others, Gus Cameron and Allen Marsh relished the tussle with the local sailors.  Jan Frayne, Jon Spelman and Anna Mason sailed well consistently throughout the series to win 1st overall lady, 1st Radial and 1st 4.7 respectively.

Another Easter at Rock with Chew Lasers goes by.  2017 was a gem.  I’m already looking forward to Rock Laser Open / Chew Laser Annual Holiday in 2018! 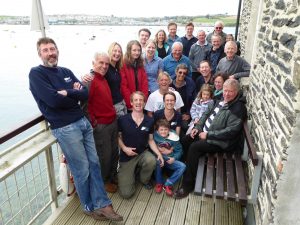