Rule 42 is the rule that governs what is permitted and what is prohibited in terms of propulsion; propulsion through the sailor’s actions and kinetics (including rocking, pumping and sculling).
Julian Cooke recently told me of an instance during the Masters Inlands where he felt the pumping interpretations around Rule 42 were being taken to the limit (and beyond) by one or two individuals near the front when sailing downwind. The sailor in this case was a visiting sailor.
Nonetheless, this is a great opportunity to look at Rule 42 and downwind sailing.

I think we can all agree that our Chew Lasers fleet is packed with lovely decent people; none of whom are deliberately breaking rules. Hopefully we’d also agree that most of us are on a development path that will naturally at times include innocent rule infringement. The faster we correct these infringements through awareness, the fewer people that will have their enjoyment compromised. Also, fewer sailors risk developing styles that will lead to jury boat interventions and/or disqualifications if they progress to the national level and beyond.

My injury has provided me with a chance to watch some of the sailing from a spectators’ perspective and through the binoculars I’ve
spotted a few things that I think are worth sharing.
Before I go further, I think it appropriate to say that Rule 42 can get rather highly charged and is very much an interpretational matter. I will try to stick to the facts wherever possible as well as putting my subjective views forward.

Below is an image of the Rule 42 interpretations for downwind sailing by Judge Ron Westcott in the Laser Gybe Magazine. 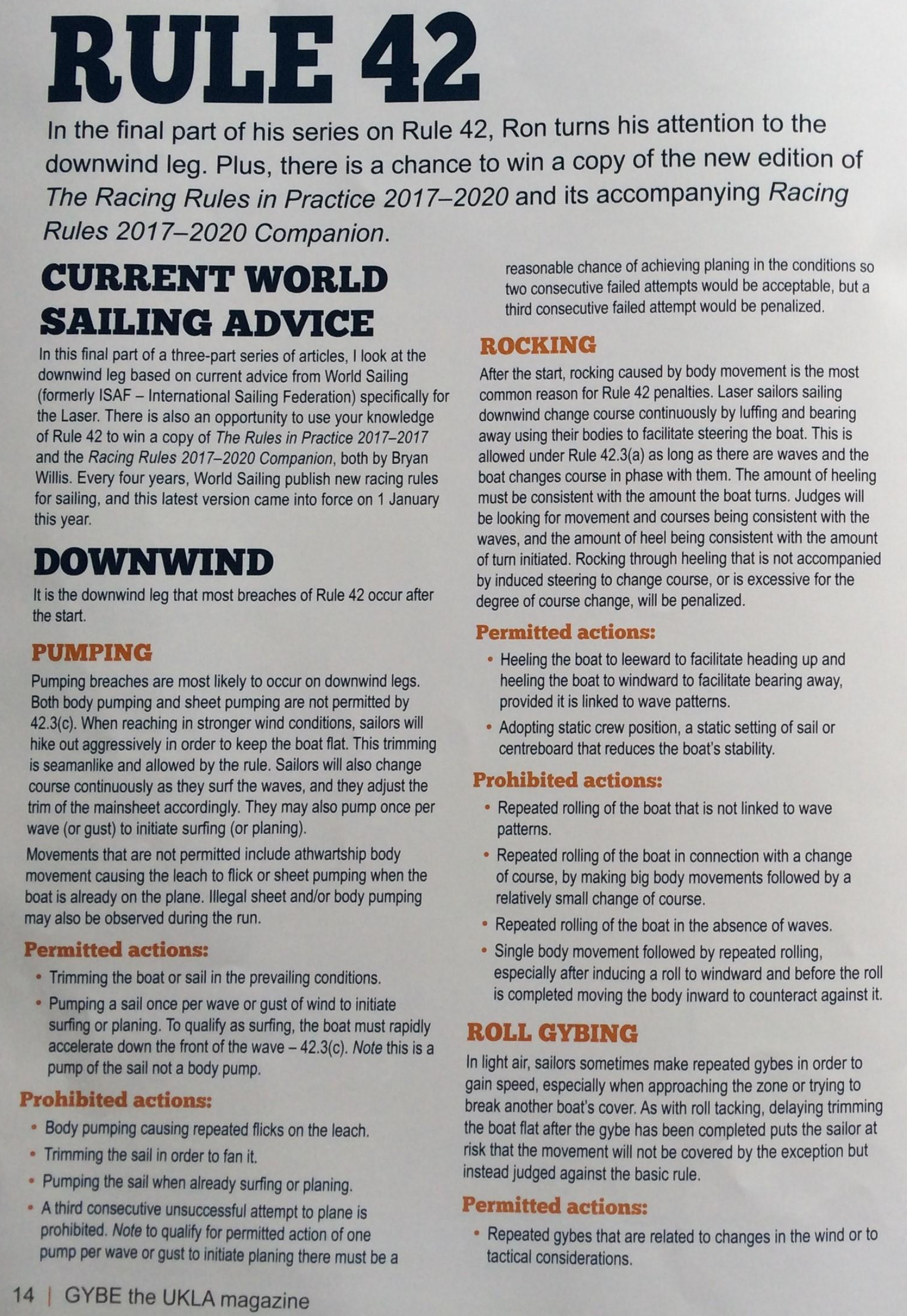 What have I seen

I’ve seen a large different in sailor’s downwind styles at Chew and at the national level. However, in terms of kinetics, what I’ve mostly observed at Chew is Laser sailors broadly sharing a static style, not particularly kinetic or dynamic. This style is maintained consistently across the wind range.
These individuals are not pushing Rule 42 downwind. From a coaching perspective, I would probably suggest that in certain conditions that these individuals could get there boat down to the leeward mark in a shorter time by being a bit more kinetic; without breaking rule 42. This is seamanlike, better sailing and more fun! However, at Chew the frequency of suitable conditions is relatively modest as we are an inland water.
There are a smaller number of individuals, and I’m one of them, that can be more kinetic. Sometimes this is just because it is more seamanlike (in waves), and sometimes because we compete nationally or internationally where the skills (and fitness) of kinetics are vital when racing on the on sea. Essential if we want to be competitive with the best in the sport on the sea.
Some of us, including me, have been learning through jury boat interventions at big events. For me personally I’ve not been yellow flagged for my downwind technique but have witnessed many jury boat interventions on sailors downwind. (Out of interest I was yellow flagged for sculling before the start at the Masters worlds in 2015 and learnt my lesson!). The jury boats help us to understand what actions are permitted and what are not. Perhaps most importantly we’ve learned under what conditions being kinetic is both permitted and fast!
The nature of development means that some of us that are more kinetic may be a little further back on a learning curve of when kinetics are permitted and when they are not.

There are three sets of conditions for kinetics:

Getting to the nub of it!

The below clips show the use of dynamic kinetics and fast action sheeting (in and out) with proportionate changes in course downwind in waves. This rolling style with big changes in heading downwind is often known as S curving and can be extremely fast (pioneered by Ben Ainslie and Robert Scheidt).

S curving is a skill. National level sailors are certainly proficient in this regard and a few of the club members are highly skilled too. The key point for us all to remember is this:

If the conditions are such that planning or surfing are not likely, then the sort of fast action sheeting that you can see in the attached video are NOT permitted under Rule 42. 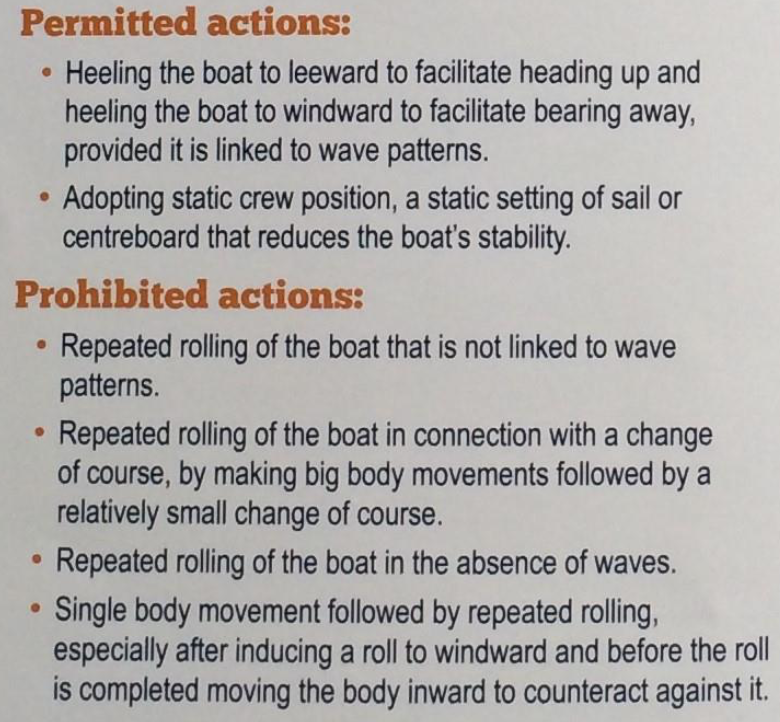 The key question to ask oneself (and that are jury boat will be asking itself) is are there waves that can be surfed? Often the dynamic changes in course heading (and resultant fast action sheeting) are related to the subsequent avoidance of the back of the next wave after surfing has been initiated.
A secondary question is whether an upturn can enable planing or not.
S curving, particularly rhythmic S curving with fast action sheeting, when there aren’t waves to surf (or avoid through transitions), and when there aren’t opportunities to plane through course alteration, is what jury boats pick up on every race at big events.

Hopefully this has clarified the situation and given us all something to think about.
It is more fun when we play by the same rules. Equally we are all at different stages of our development and learning what it permitted and what is prohibited under rule 42 is complex. I genuinely believe that we have sailors in our fleet that want to race fairly within the rules; let’s cut each other a bit of slack but try not to be afraid to raise the point when it arises.