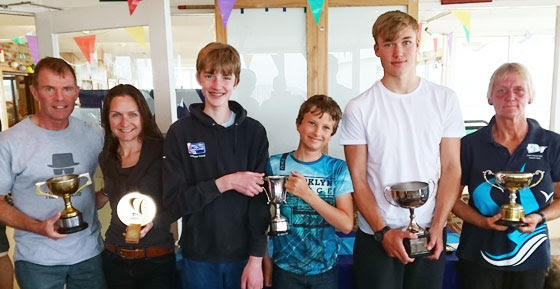 Water levels continue to fall, RIB drivers be extra careful in all the usual places: the concrete jetty, Little Denny, the northern “corner” of Denny Island and anywhere near the shore. If you aren’t sure, please ask.

Bart’s Bash is a worldwide race and celebration of sailing in memory of Olympic sailor Andrew “Bart” Simpson and also a fundraiser for the Andrew Simpson Foundation which improves lives through sailing.

Prepare your bunting and flags to dress your boat! The event is open to members and visiting sailors so invite your friends from other sailing clubs if they are not running their own event.

It is really important that you register online before the race at www.bartsbash.com, (otherwise we can’t guarantee your entry will be recognised) and also book via the CVLSC WebCollect page to help administration and results processing on the day.

A brief reflection of the diversity of our amazing club, over the last 2 weekends we have had: 30 youngsters take part in August Antics, ten adults start the RYA level 1 and 2 course, Lake and Cake, CLADS, Chew Crew, the age group trophy race and pursuit race for the brand new Golden Anniversary Trophy (see sidebar). A variety of members have been to national sailing events or taken their boats on holiday. Coming up is an introduction to Fevas, the start of Autumn points, a RYA Powerboat 2 course, Bart’s Bash and the postponed Grand Parade of Sail – and that’s just in the next couple of weeks.

There was a delightful atmosphere during August Antics. Well done and thank you to Mike Kew and team. Despite the lack of breeze some sailing did take place as well as lots of water and shore based activities. Do have a look at the lovely photo on the club Facebook page of the ducks!! A measure of the success of August Antics and Chew Crew over the years is that many of the young sailors progress and become enthusiastic Assistant Instructors.

On Sunday the forecast prompted us to postpone the Grand Parade of Sail to September 17th, the same day as Bart’s Bash.

Well done to everyone who sailed the Mercury Macklin Melvin Watts trophy race in a lively variable and unusual south easterly. In the afternoon the new Golden Anniversary Trophy was “pursued” by about 20 boats with every club fleet represented in the top 5 places. As always, good to see the young Feva sailors taking part and competing at the top level – Quinn and Finn second overall to Nick Martindale and Ruth Kenyon. 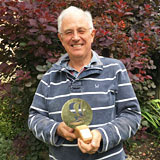 Awarded for the 50th Anniversary Pursuit Race, the new trophy was designed and made by Doug Pattison (above). Many thanks to Doug for the inspiration and creative skills used in producing this impressive new trophy. The trophy will be on display in the bar for a few weeks.