A week ago I was looking forward to racing in the first 3-day K1 Nationals, and my first time sailing single-handed on the sea for over 50yrs !

Steady winds of 10-15 knts were anticipated, with 8 races over 3 days, the perfect setting for the newly formed K1 Class Association to hold its first big National event. 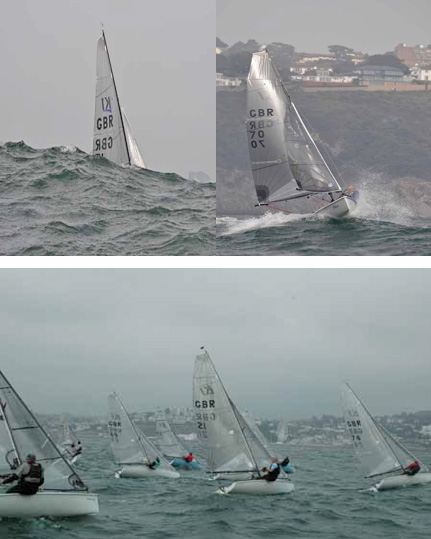 However …. there had been several days of 25knt Easterlies blowing straight down the English Channel bringing with it huge steep-faced waves, complete with white horses, roaring across the seas off Torbay. On top of that the K1 race course had been set well off-shore to leave plenty of room inshore for a large fleet of 420s  who were also racing that weekend.

In the pre-race briefing the RO admitted that it was a ‘bit lumpy’ out there & that if we parted company with our K1s then they would be focusing on rescuing us rather than our boats which, being self-righting, would probably career off by themselves towards the seawall or the rocks. If we chose to race then we should also be prepared to retire early rather than present the race management with difficult rescue tasks.

When I left the starting area in Race 1 & headed offshore for the first mark it was a bit of a surprise to say the least, the seas were already pretty rough but nothing compared with the sets of waves that were steadily developing further out to sea as the wind increased.

I know that sailors & fishermen are renowned for exaggerating but the published inshore photographs don’t do justice to the conditions further offshore. Anyone doubting my account should ask Chris Goldhawk, who has sailed his Solo there under similar conditions & rated it as some of the most exciting conditions he’d ever sailed in.

The starting area had breaking waves of a couple of metres or so but it was relatively sheltered from the larger swell that we could see breaking further out towards the top mark.  When we got out there it was even more daunting than it had first appeared, the bigger sets of waves sometimes completely hid other boats from sight, particularly if they were heeled over beating to windward, & as the wind strength increased later in the day the breaking crests presented quite a challenge just to stay attached to the deck of the boat, let alone to race effectively.

More daunting still was attempting to run downwind, it was like falling off the roof of a bungalow, in fact some retired with what they described as something close to ‘vertigo’ & that you sometimes had to look above you to see starboard boats approaching at very short notice. It was certainly unnerving at first reaching down-wind but became fast & exciting once you got the hang of heading up as much as possible for the initial drop over the top of the bigger waves before bearing away & heading down the face of the wave.

I do know that waves always seem much bigger when you’re beneath them but even Torbay Yacht Club admitted it was the heaviest seas they had seen for ages. I’ve crewed in rough seas before, including Flying Fifteens off Falmouth in pretty heavy weather, but the seas there were nothing like as big as those we had off Torquay & the particular difficulty several of us had with new K1 hulls was that the smooth, rounded, side decks are very slippery & also, having no well-defined gunwale to lock onto, were hard to lock onto effectively. Unless you had decent grip from special hiking shorts, or a non-slip deck coating, then it became extremely difficult to find any stability at all while being thrown around the boat by the bigger waves.  Quite a few of us had also elected to wear our dry suits, to deal with prolonged immersion should we part company with our boats, & these turned out to be particularly slippery against the deck of the K1.

The helms with experience of racing at sea, & the more experienced heavier helms, soon got to grips with the situation, but many of us were forced to retire from racing to resolve this personal safety issue, not to mention the risk of losing our boats should we part company with them.

We tried various deck tapes from the local chandlery but nothing seemed to help & it wasn’t until I followed the suggestion from a local that ordinary cotton shorts worn over the drysuits worked perfectly well that I was able to rejoin the sailing & begin to enjoy the conditions.

In the event this was too late, the final race on the Saturday was abandoned because the rising wind strength was creating dangerous breaking seas & by the time I’d experimented with the non-slip shorts on Sunday the final three races were being shortened & squeezed in back-to-back before lunch to give the chance to complete at least 7 races for the event.

Charley Cumbley won the smart new K1Nationals trophy, another visiting helm chased him into second place with Jeff from Vandercraft, the K1 supplier, lying third. The regular K1 fleet followed in a series of consistent results with the heavier and/or more experienced sea sailors making the best of the conditions.

On a very positive note for the K1 fleet there were no serious boat or rig failures, nobody became detached from their boats for long, although some, having been swept off the deck & hanging onto the main sheet simply found themselves being swept back into their boat by the next big wave.

For myself, as for many of the other helms, the self-righting qualities of the K1 gave us the chance to sail enthusiastically under very demanding conditions, particularly downwind, and to race in conditions that we would find extremely challenging in a more conventional dinghy.

I’ve already bought some Progrip for the side decks & some pull-on hiking shorts to cover up the shiny drysuit .. an obvious thing to do perhaps but not one that was never an issue sailing on lakes or reservoirs.

I was also gratified on a personal level to have the revised rigging that I, amongst others, have been developing & promoting over the past couple of years to be completely ratified at a special meeting of the AGM that was held to resolve these issues.

We now have in the K1 a dinghy with effective sails & controls, a turn of speed equal to a Scorpion or RS200 & the chance to continue sailing single-handed in conditions that would be pretty daunting in almost any other dinghy.

It also appears to be bringing older sailors, often with a string of Championship results from earlier days, back into dinghy sailing. Alf Hawkesworth from Carsington, for example, was Cherub National Champion over 50 yrs ago, Osprey Champion for about ten years, amongst other successes, but hadn’t raced a dinghy for over 20yrs.  He won the K1 Inland Nationals at Oxford in over 30knts average wind speed & was peeved to do no better than 7th at Torbay. However he also discovered that the many other K1 owners have a similar ‘pedigree’ which also explains the boats growing popularity.

If anyone wants to have a test sail do ask me. With some clubs, Wimbleball & Teignmouth for example, now having small fleets of K1s developing, often replacing more traditional dinghies such as the Solo or Flying Fifteen, it does seem to be winning over the sceptics.