The Finale of the Solo Fleet Winter Series 18-Dec-16

With just one point separating three of us at the top of the leader board and with two of our fastest sailors equal on points before today’s racing, it could not have been a more exciting build up to the climax of our venerable Winter Series.

Frustratingly the forecast was for little more than five knots of wind and this may well have put people off making the trip to the Club – even with the result of the Series hanging on such a knife edge. Whilst waiting for the wind to fill in, we had an interesting debate as to how far you should let your traveller out in a light breeze upwind and a few of us then popped out onto the water early to test our theories.

Come the starting sequence sadly neither of my Series’ competitors had turned up so the overall final outcome was to be a foregone conclusion however this didn’t stop the few of us who made it from having a very enjoyable and civilised day’s racing. There was some very close sparring between John Nurser and Bob Phillips in the first race – with Bob just taking the honours. Whilst there was further close racing between John and Rick Knapp in the second race to make the everything worthwhile. 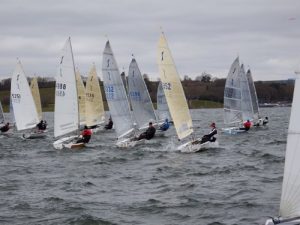