On a busy Saturday twelve Wayfarer sailors towing four boats made the 165 mile journey down to Falmouth for their annual summer cruise. John Lethridge (Lefty), who sailed with Colin Shepherd to the Scillies last year, joined us with his own Mark 4.

Normally all boats are equipped with anchors, oars, paddles and most have an outboard engine. We do embark on some quite long day trips so safety is paramount throughout. On the first day the boats are rigged at the Falmouth “Park and Float” and motor down to the floating pontoon belonging to our hosts the Royal Cornwall Yacht Club where they are moored for the week. Each morning there is a conference between the skippers/owners as to the destination for the day. This is dependent upon the weather and tide conditions. It is customary for the owner to stay with his boat with the rest of us, the crew, changing boats daily. Usually we sail with a total of three up changing duties round at regular intervals. 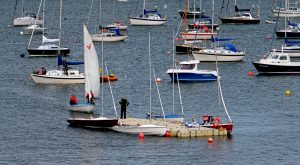 For the first four days this year we were confronted with wind of force 4 to 5 (16 to 24mph) and on Sunday morning it was a case of double reefs and no foresail and staying in the inner harbour, (the afternoon being spent supporting Andy Murray at Wimbledon!).

It would be easy to detail each successive day however with a predominately North West wind and neap tides we were able to sail to many of our favourite locations. Notable journeys were the trips to the Pandora Inn, a beautiful thatched waterside inn at Restronguet  at the top of the Carrick Roads with a pontoon where we moored up for lunch, Coverack (beyond the Manacles) by a brave few, St Anthony in Meneage beyond the Helford River, a lovely sheltered village with a beautiful small church almost at the waters edge and Pendower Beach on the far side of Gerrans Bay from Portscatho.

The neap tides meant that each day we had to combat the ebb tide flowing down the Carrick Roads and the somewhat daunting beat up the Penryn River through the crowded anchorage to the pontoon adjacent to the Royal Cornwall Yacht Club.

On the last day three boats ventured out into the Carrick Roads and slowly drifted out to sea against an incoming tide and a fickle wind knowing that the same flow would bring us back in again. As we cleared Pendennis Point the true wind having backed to a westerly hit us and we enjoyed a glorious beat in a force 4 up Falmouth Bay half way to the Helford River before turning and running back into St Mawes, on the opposite side of the Carrick Roads to Falmouth, for a well earned last Cornish Pasty for lunch before our last journey up the Penryn River, stopping at the pontoon to derig and start the outboards to motor up to the Park and Float to get the boats out and pack up ready for the journey back on Saturday.

Mention must be made of Colin Shepherd, Lefty and John Angus sailing to Mevagissey and back a distance of some 40 miles. They came back exhausted but triumphant with sticks of Mevagissey Rock as proof! Their GPS had their boat speed showing 12.7 knots at one point this must be near the maximum speed for a 16.0 foot dinghy.

The camaraderie among the group was exceptional and our faith in the versatility and seagoing abilities of the Wayfarer was enhanced. 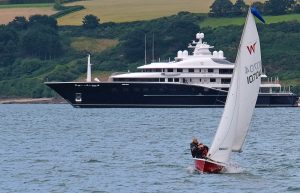 This narrative would not be complete without a huge vote of thanks to our hosts the Royal Cornwall Yacht Club who welcome us back year after year. This year for various reasons was something extra special. The food was up to Cordon Bleu standards. The friendliness of the staff, officials and staff was such that we all felt that we were permanent members of the club and not just visitors.