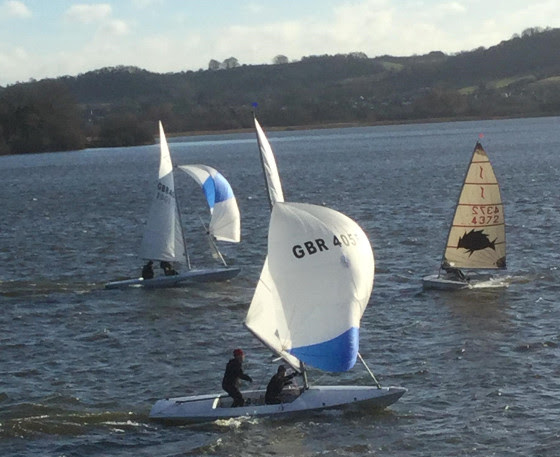 South and South-westerly winds prevailed for the seasonal trophy races. We had 16 keen starters for the Tap trophy on Boxing Day and a 10knt South-east breeze – it was chilly! The results were amazingly close after a 50 minute race, with the first 4 covered by just over 30 seconds. Andy Bones, ably crewed by Nick Stone triumphed in his Flying Fifteen, and has the dubious honour of polishing the inelegant ‘tap’ for the next 12 months!

New Years Day brought a fresh, gusty, shifty South-westerly which reduced the numbers to 10. Race Officer, Keith Harris determined to test our resolve to the full, giving Martin Jeremy almost an hour and a half of ‘fun’ in his Radial! The trophy was won by Cameron Scott in a Laser, a full minute and a half ahead of Ian Cadwallader in the Fifteen (again crewed by Nick Stone – the message is clear – if you want to get into the prizes, invite Nick into your boat!).

Class Race Day 5 last Sunday was poorly supported; this may have had something to do with the fresh North Easterly wind – and it was freezing! The usual format at this time of year is for one race in the morning, then two in the afternoon; the Race Officer very sensibly swapped this round so that the two races needed to ‘qualify’ for the day were completed back to back in the morning. When the hardy few returned to shore and shook the icicles off, they were all comfortably changed into ‘warmies’ eating lunch with not a soul keen to venture out for the final race. John Warburton dominated the Handicap starters in his Aero with two wins. It was good to see Frostbite visitor, and illustrious ex-member, Graham Cranford-Smith sail a beautiful looking Merlin – keen boat spotters, it is worth turning up one Sunday, if only to see this. Bill Chard and Ian Cadwallader each won a race in the Fifteens, with Bill triumphing by winning the second of the two races. Peter Sherwin won both races in his Laser, though even his renowned ‘uncapsizeability’ was briefly shaken – it’s the exceptions that prove the rule!

The RYA Junior and Youth sailing squads are where young racers get the very best training to enable them to progress up the RYAs ‘performance pathway’, which they hope ultimately may lead to Olympic glory. Getting a place is hugely competitive. Hopefully you will read more about this on our website, but I wanted to list the youngsters that we currently have in these Squads:

Well done to all of you – you make the rest of us at Chew very proud. (And good luck to your parents with all the travelling etc etc!)

The morning and afternoon Frostbite Series start Sunday 14th January. This is our longest points series taking us all the way to the end of March. It is split into mornings and afternoons so those only wanting to do one race in these cold months can still qualify in the results. The lake is filling up dramatically and the winds are usually good so please come along and join in. We can’t have the Frostbite visitors stealing all the glory – even if they have a beautiful Merlin Rocket.

Astronomy by the lake Saturday 20th January – 2 free places for club members remain (again contact Helen), otherwise you can register and pay. The website is ‘Astronomy by the Lake’

As the Grand Finale of the Club’s 50th Year Anniversary Celebrations we are delighted to welcome Ian Walker MBE for a talk about his winning career in Sailing and to answer any questions you might have.

Voted ‘Worldwide Sailor of the Year’ last year after winning the Volvo Ocean, Ian is one our most successful sailors and the only Briton to have ever won what has been described as ‘the globes most gruelling race’. After leaning to sail in a Mirror dinghy, Ian progressed to win 2 silver medals at the Olympics before coaching Shirley Robertson to Gold in 2004. Most recently he has been appointed Director of Racing at the RYA and ultimately responsible for our future medal winning performance.

Come and hear what it takes to win at the highest level – and ask your own questions of Ian in this unique and special event. A minimum donation of £5 per person is suggested, which will be contributed to Ian’s John Merricks Sailing Trust. The Club will also be making a special contribution to this Trust.

Younger sailors are very welcome to attend; Ian is keen to promote youth sailing and he will talk about his early days in a mirror dinghy and how his sailing career developed.

Don’t miss what promises to be a great evening.

Finally, a Happy New Year to you all and good sailing in 2018.
John Smalley – Vice Commodore