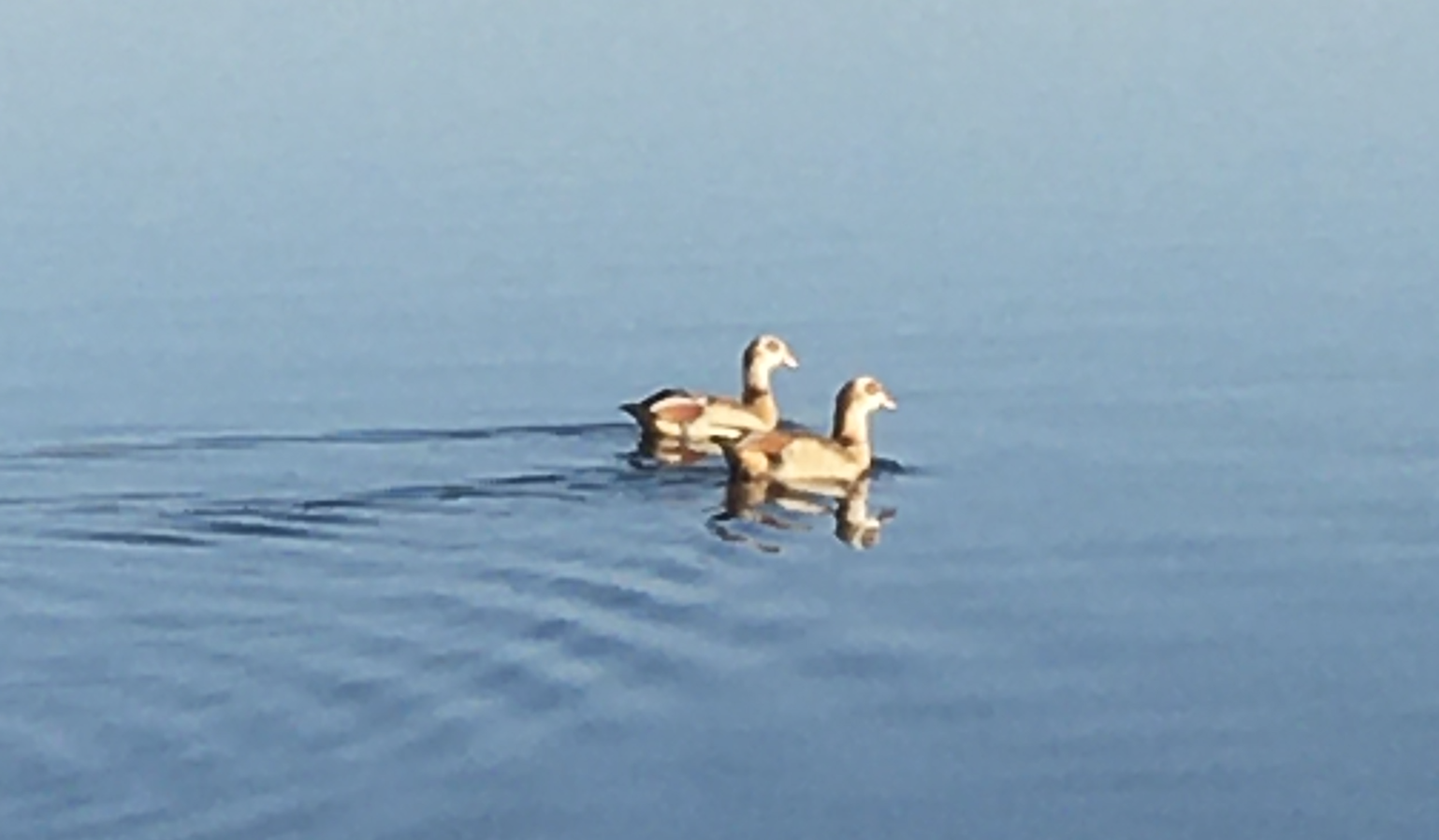 A pair of Egyptian geese on the lake – lost?

A very Happy New Year to all the CVLSC members!
Yes, it has taken me a month to re-create a head of steam to revive the news so there is plenty to cover….
The two festive season trophy races were affected by the weather!

Our leader, Helen, and I were excited to be organising this race; we had the mulled wine and mince pies at the ready, but our enthusiasm was dampened by a forecast for shedloads of wind. As a result we only had a handful of somewhat reluctant sailors to contend with. However, the wind was in fact a pleasant 10-15 knots from the South West so 10 hardy souls set out to do battle. The race turned out to be a nip and tuck battle between Pete Sherwin in his Laser and Paul Smalley in a K1. The keel finally won the day by a very slim 15 seconds on corrected time, and Rosie and Susie Sheahan showed how quickly they have their Feva going in third place. But there was more drama amongst the rest with three of them taking a shortcut and missing out a mark. The eagle eyed following boats were incensed (!) and this promoted Jan Frayne, Damian Gardner and Sarah Tauwhare into the prizes – a nice result!

Apparently the wind didn’t turn up at all so the trusty rolling pin trophy will have to wait behind the bar, unclaimed, for another year.

Over the course of the morning series an incredible 93 boats entered at least one race across the various fleets.
One point settled the Flying Fifteen fleet in favour of Keith Harris and Claire Jefferis ahead of Max Passmore and Julie.
The Solos could only be decided after a tie-break in favour of Chris Meredith ahead of Toby Peacock.
The results were more decisive in the Handicap fleet with Andy Jones winning in his RS100 and Pete Sherwin leading the Lasers – the fleet with the highest number of qualifiers.
The numbers for the afternoon series were only 10 less than for the mornings.
Max turned the tables on Keith in the Flying Fifteens.
Pete Sherwin and Chris Meredith kept their grip on the Lasers and Solos.
In the Handicap fleet our duties supremo, Tom Skailes assisted by wife Julie beat them all in his Seafly – another nice result!

A lovely breeze for the first day of this series saw some amazing turnouts in all the fleets. There were 15 Handicap boats and the same number of Lasers. Also a really pleasing 11 Solos.
It was back to a big wind for the second day last weekend which reduced the entries.
Too early to identify the runners and riders but watch this space in the coming weeks….

‘Meet the Commodores’ followed by RYA Club Development Forum
Sarah Evans from Lydney Yacht Club and Christine Nichol from Bristol and Avon S.C. have kindly agreed to come and give us a brief insight into what goes on at their sailing clubs. With one on the Severn, and the other on a river they use very different sailing waters from ours at Chew. Please come along to support this different style of warmer evening. See the pictures on the right of Christine and Lydney Yacht Club.

This will be followed immediately by the RYA’s Club Development forum, hosted by Rob Howlett, the RYA South West Development Officer. You will get you chance to hear about, and have your say, in how to reduce membership turnover and encouraging more people to join, particularly junior members.
The bar will be open from 6.30 and Rob will have the galley at full steam!

Friday 07-Feb-20 – QUIZ hosted by John Kelly and Ruth Kenyon
Wednesday 26-Feb-20 – ‘Nipigegi – Wayfarer Around Britain Record’ – a not to be missed evening with Will Hodshon. If you are unaware of this feat, and what promises to be a fascinating talk, look up the name on the internet.

We are targeting this squad at those who are 14-18, who have likely done a bit of racing before, but looking for something a little different. We have identified some potential squad members who have already been contacted, but all other youth members who may be interested should get in touch. The boat we are using is an Open 500 which is now sailed at Chew. It is a fast, stable and exhilarating small sports boat and perfect for training our youth squad for the slightly larger RS21, SB20, J70 and J80 sports boat classes. The costs will be £15 for each session attended. The coaching team includes national level coaches, British Keel Boat Academy graduates and some of our own CVLSC yacht racing ‘rock stars’.

Email youth@chewvalleysailing.org.uk to book a place.

This continues on Sundays 19-Jan-20 and 02-Feb-20.
Remember this series is split into mornings and afternoons so you can target one or the other if the whole day is too much.

Open Meeting style racing in our usual Sunday fleets. One race in the morning and two in the afternoon – one discarded result if all three are sailed. Prizes awarded at the end of play.
Time to start stocking your wine cellar again after the Christmas ‘hit’!

Our two Club University members, Bristol and Bath, will be fielding teams to do battle with all the other South West Universities to win places in the ‘finals’ event in April.
I am pleased that more of you are catching on to watching what is a highly spectator friendly aspect of our sport. Two teams of three Fireflys sailing on an apparently tiny course usually very close to the clubhouse – yes, you can hear what they shout at each other! – and multiple races back-to-back which usually last less than 10 minutes. Come along and watch.

The committee are planning to replace one of our training Wayfarer dinghies with another RS Quest very soon. The boat in the picture above is number 9142, in nice condition with a boom-up cover, trolley and Main and Genoa. Please contact me if you are interested in purchasing this boat or would like more details.

Meanwhile I hope to see many of you at the Club on the less windy days!
John Smalley – vice-commodore@chewvalleysailing.org.uk 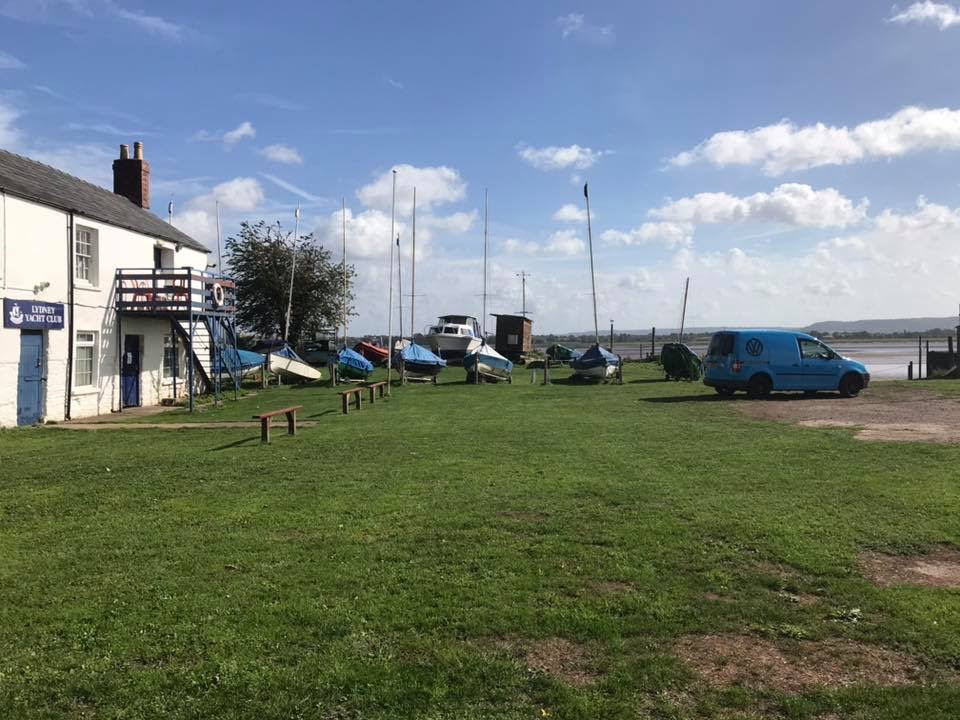 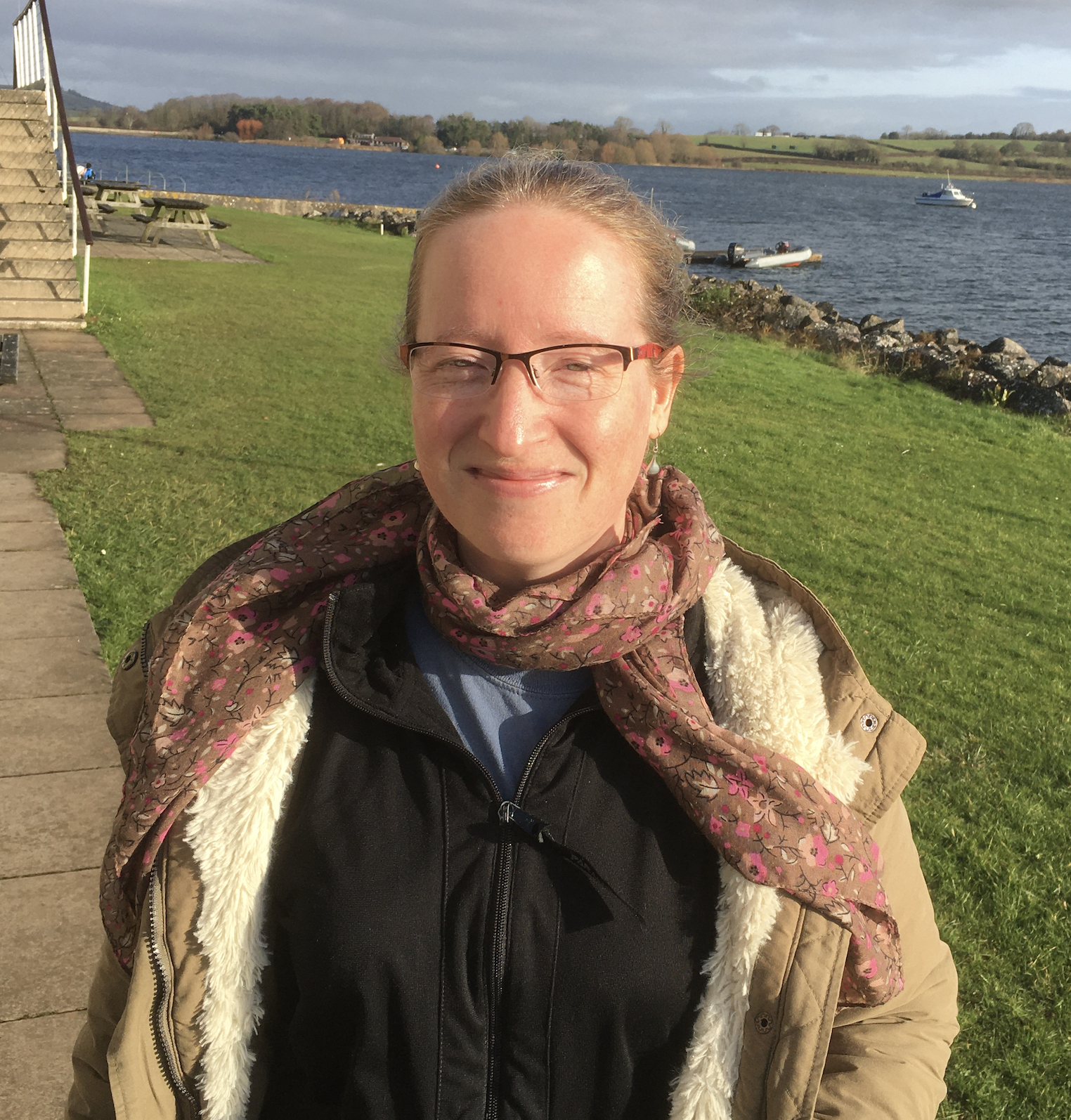 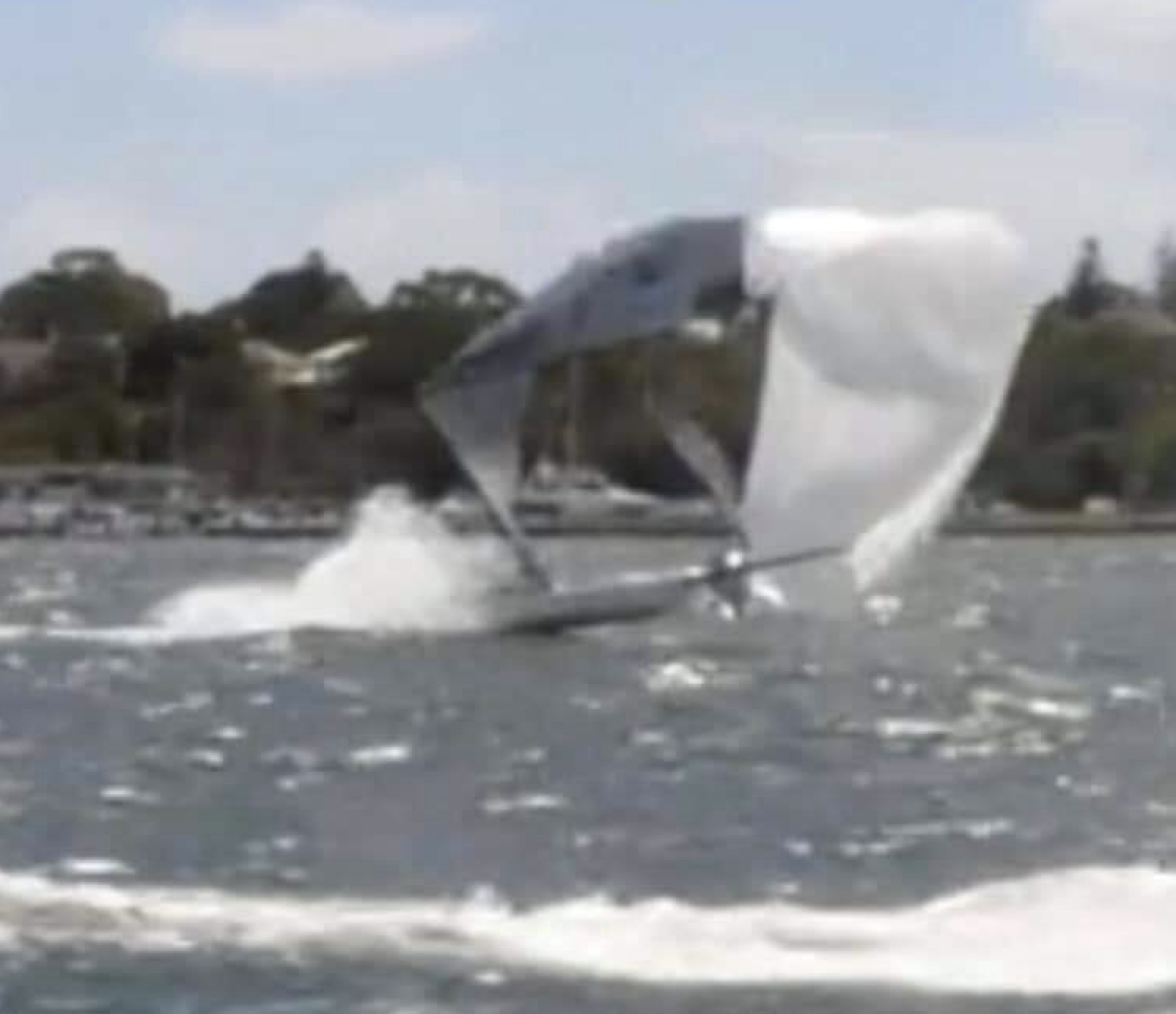 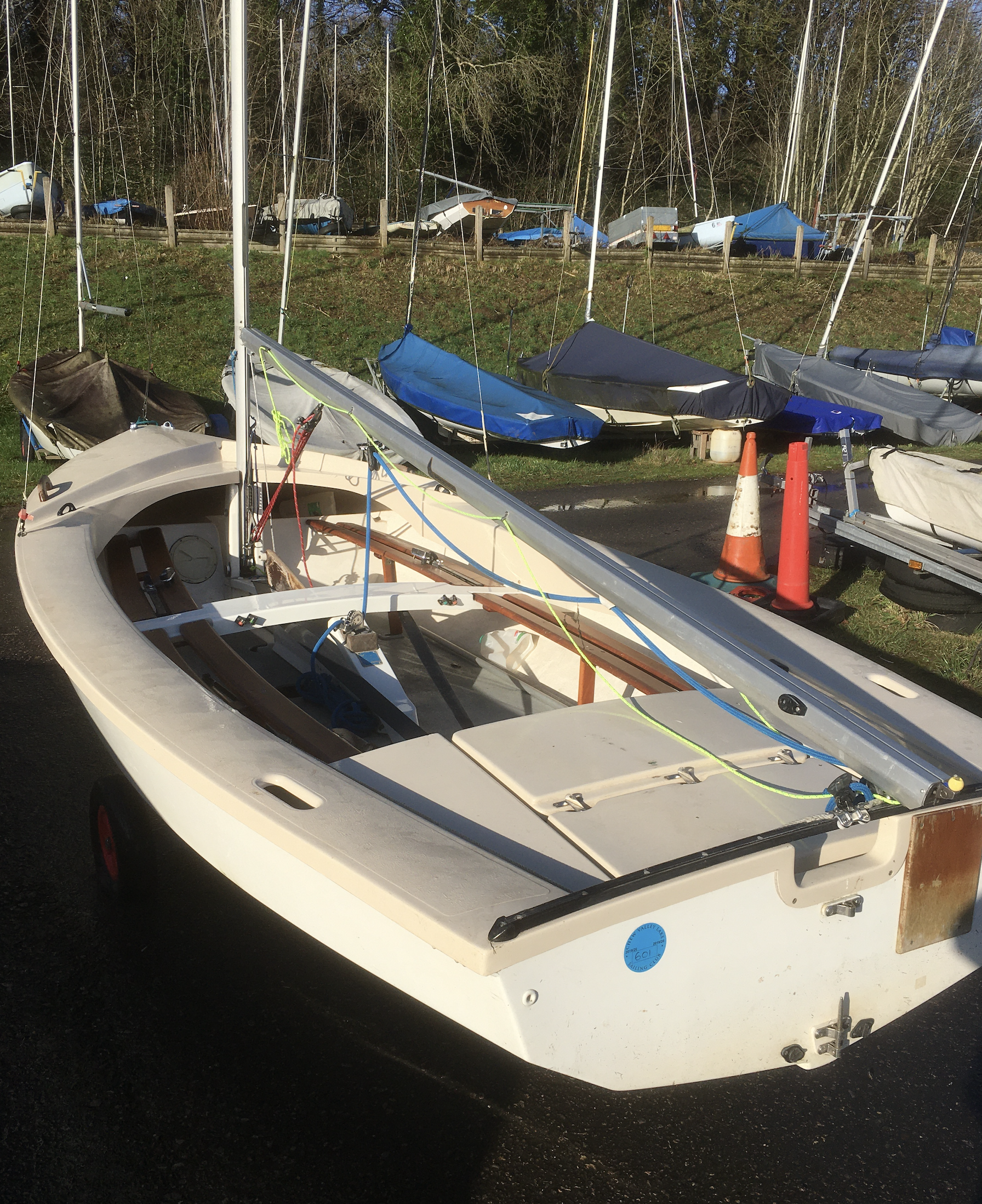 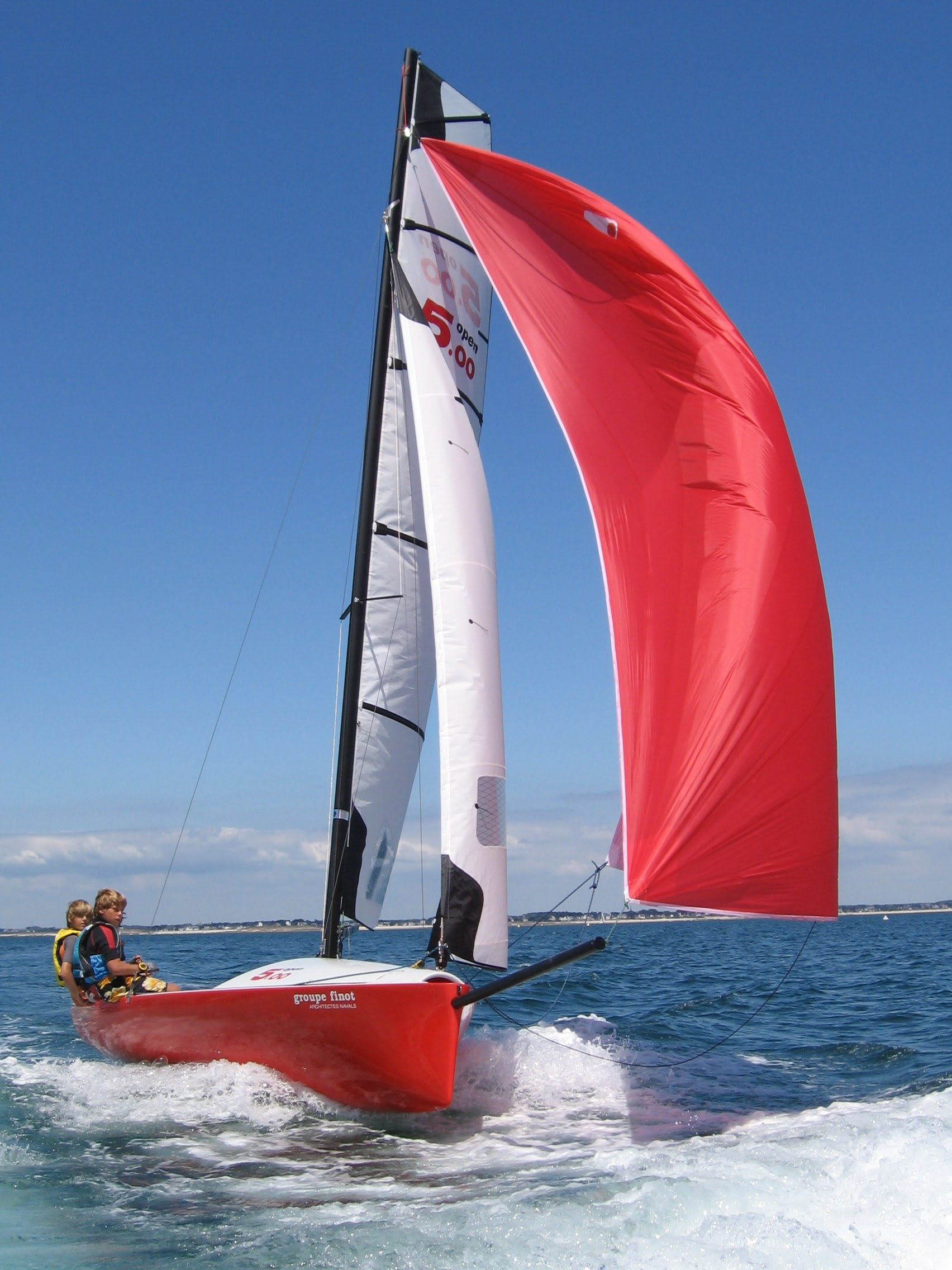 What self respecting youth wouldn’t want to train in this?