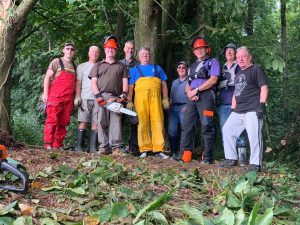 The Club has been busy these past two weeks and I will try and get you up to date with what’s been happening. One notable fact is the emergence of the Mirrors with very small crews! Both the Steve Morris and the Regatta pursuit trophies were won by Mirrors! I guess that will be the cue for the Flying Fifteen fleet to campaign to get their handicaps adjusted! 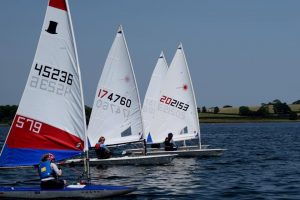 The Ladies Trophy Race was on a gloriously hot afternoon at the end of June. The ladies competed in 3 races around an Olympic course set by our RO, Adrian Cudmore. The first place and well deserved winner of the Trophy was Ella Cudmore in a Europe, Mary Tilling came second sailing extremely well in her Topper, and Jo Cudmore took the third place in her Laser beating the rest of the lake n’ cake ladies.
There was a good mix of boats on the water, and some excellent racing with tight starts on each race (and some so keen they were over the line on the 2nd race!). The ladies were chopping & changing and smiling on the line, and everyone had someone to race against in the fleet. You can see the photos on Facebook (posted 30 June).
Many thanks to Pete Sherwin for the morning training session and coaching us on starts, roll tacking (oh no, not more Laser pumping – Ed!!) & gybes and capsizes; and to Adrian Cudmore and Cathy Bartram who expertly ran the 3 races. Celebrations were held afterwards in the bar with tea, cakes, strawberries, and ice-cream and the all important Prize Giving. Whilst Sarah Tauwhare and her band of ‘merry musical mates’ played folk music to us from the balcony – fabulous. Ella, Jo & Adrian (The Cudmore’s) each got a bottle of wine, and we can vouch that these were genuinely well earned!
The next lake n’ cake sail & get-together is on Saturday 03-Aug-19 – meet in the bar at 1:45 rigged & ready. If you would like to be added to the lake n’ cake email contact list and WhatsApp group do let Rosie know: rosie.bowers@btinternet.com

There were almost 40 boats at the start of the Round the Island Race; many were filled with excited, water-pistol armed, young pirates, several with the CLADS stalwarts and most displaying either pirate flags or carrying a parrot! 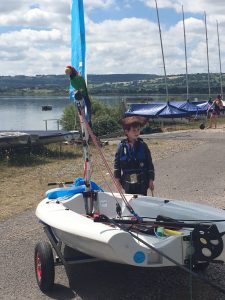 A Pirate and his  Parrot at the Family Regatta

The family Schnurr entered with a Swallows and Amazon style vessel and I think Dan would be better suited to an entry at Henley – his rowing technique closely followed that of Steve Redgrave….! 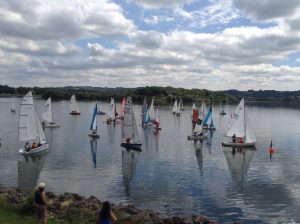 Round The Island Start

It was a great day – treasure was sought on Denny Island, Razor Rosie Bowers looked the part as she judged the best dressed pirate parade. Roll on next year! 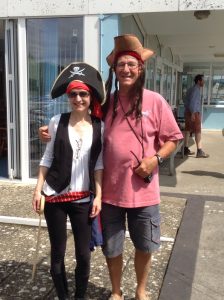 This was held in very light and fickle winds, but just enough to complete both races. The morning Handicap race was sailed around a triangle-sausage course in a Northerly, or at least that’s how it started! After two complete laps and a few significant shifts, the asymmetric single-handers hadn’t quite managed to get far enough ahead and the A Handicap trophy was retained by Colin Evans in his Finn. The B Handicap fleet wasn’t far behind and was won by Nick Martindale in a Solo. A smaller fleet entered the afternoon Pursuit, even reducing it to a 70% length race wasn’t enough to persuade some to have a go in the even lighter conditions. The Mirror set off at 1.30 and it seemed a very long time before anyone else was in pursuit. Again there were lots of shifts – the race team were concerned to see the Solos sail almost the whole beat on port, only for the Flying Fifteens to do the same on starboard a few minutes later! In the end, the Mirror’s 17 minute start proved too much to reel in, and the Marshall Trophy went to Paul and Gabriel Nicholls in the Mirror, closely followed by four Solos.
Thanks to Bill Chard, the Race Officer for the day.

The Thursday evening start racing sessions came to a climax last week with a short regatta for the final session. Thirteen boats ranging from a Flying fifteen to a trio of Toppers battled it out over a short course in light and shifty conditions. The full Chew race procedure was used; hooters, flags, the works to give a flavour of what to expect in a normal club race.
It was great to see all the tips and techniques covered in previous weeks being put to good use resulting in some very impressive starting and notable performances.
Things were rounded off with a very civilised BBQ (ably supervised by Alex) and prizes all round. Top of the bunch was Simon Conway in his newly acquired Laser having been pushed all the way by most of the fleet..!
Following the sessions we are already seeing a good few joining in club racing on Sundays and Wednesdays which is brilliant. Those regular racers amongst us please keep a look out for the new faces and be prepared to offer words of wisdom as required. 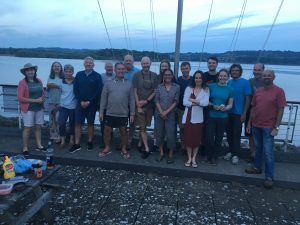 …looking forward to next year
Nick Martindale and Andy Bones

Congratulations to the 10 new junior sailors at the club who have just received their RYA stage 1 and 2 certificates after completing the Sunday morning beginners course run by Mike Kew. They now get to join the rest of the Chew Crew intermediate group having fun and improving their sailing on Sunday mornings through until September.

August Antics arrangements for the August Bank Holiday weekend are slowly coming together. Please speak with Dan Schnurr, Mike Kew or Nick Edmonds if you are able to help out. Sign up should go live on webcollect in the next few days. The plan is to run a fun Intermediate Group for Stage 1 sailors and above, and a race training group for those looking to try out and improve their racing skills.

On the racing side, the Junior Race Days have proved popular though seem to have been held whenever the wind has been over 20 knots! The afternoon race series has consequently suffered though Charlie, Mollie and Bella are all early front runners. Three more junior training and racing days to go over the summer – sailors at Stage 2 or above are very welcome. A few spaces are still available, sign up for the Junior Race Day on webcollect.

The clubs youth sailors have also been travelling to national competitions. Ed Baker and Dru Townsend had a very successful trip to Carsington for the 5th event in the 2018-19 Topper National Series. Ed was 2nd overall, and Dru 25th, and 5th girl overall.

A number of the junior and youth sailors have also been trying out Team Racing with support from Jim Rosser and Clifton College. 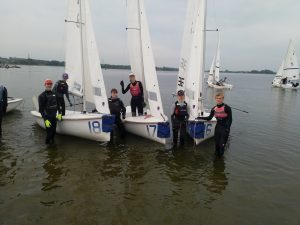 After a good showing at the BSDRA Western schools event held at Chew, the club entered a Firefly and a Feva team to the BSDRA Finals held at Oxford last weekend. Both teams gave a really good account of themselves up against teams who have been team racing together for many years. The Feva team of Alfie, Noah, Rosie and Susie finished the round robin stage having won half their races and qualified in to the Gold 2 group, finishing in 10th place overall out of 17 teams. The Firefly team of Quinn, Fin, Alice, Abi, Will and Albie were up against some very experienced teams and did well to finish the round robin with a 29% win rate. This put them in the Silver 1 group where they then qualified for the Silver semi-finals, losing to the eventual Silver winners, but finishing off with a win in the Petit Final to finish in 3rd place overall in Silver. Both teams loved the camaraderie of working together as a team, especially Noah as this was his first major sailing event of any description. We are planning to enter teams in the RYA Junior and Youth Team Racing event in October and are looking for those junior club sailors who would like to crew with some more experienced helms in this competition. Contact Nick if you’re interested in being part of the team for the October event.

Last months Sail & Ale (30th June) was a low attended affair probably due to being on a Sunday. If you had sailed that afternoon you would have been into some very strong conditions which I found most enjoyable. Ann stayed ashore (wise decision!).
The next Sail & Ale will be Saturday 27-Jul-19 so all welcome. Moving onto the following month the date proposed is Saturday 31-Aug-19.
Contact – Chris & Ann – cruising@chewvalleysailing.org.uk or chris.platts12@gmail.com

Evening Points Series – continues every Wednesday throughout July, finally ending on 14-Aug-19. We are getting 60 boats each evening – there are still lots of chances to join in the fray!

This day is designed to give the ‘Sunday’ crowd a chance to experience the fun they miss not coming to the Family Regatta (held on a Saturday!). It allows those lonely Laser and Solo sailors (the Billy-no-mates single-handers) to bring their families to enjoy a day of fun competition – with prizes! As well as everybody else of course….
So – it’s like the Family Regatta with a slight competitive edge to suit those ‘do or die’ racers!
In the morning there will be an ‘on the lake’ solve the riddle chase. The more heads in the boat the better….
In the afternoon Keith Harris will be running team racing in the Club Toppers. We want fleet teams, family teams, any teams really to pitch into the battle. Can the Laser fleet show us all they do actually have a grasp of the rules??!
There will be an Optibat time trial – can those Finn sailors strut their speedy stuff in something smaller??

I hope you all enjoy your summer holidays. If you are trailing your galleon to sailing events elsewhere, keep the Chew flag flying and tell us how you get on.