After last year’s Covid enforced virtual prizegiving, it is good news to be able to appreciate one more step back to ‘normality’, as plans have been made for this year’s event to be held at the Club once again. If you can make it, please do come along; this social celebration evening is aimed as much at the cruising fraternity as the racers.

And then we have the invitation from the Police section to join them for breakfast…. Read on!

(Also, I make no apology for using so many of Errol Edward’s amazing pictures of the RS weekend of racing).

Annual Prizegiving is back! Taking place for the 2020/21 season on Saturday 13th of November @ Chew Valley Lake Sailing Club 18.30pm. Everyone is welcome to come and celebrate our efforts and achievements over the last 12 months.

A fantastic milestone celebrated with a sit down meal courtesy of Antonia’s Deli and an evening of fun and relaxation.
Date – Saturday 13th November
Start Time – 18.30pm
Venue – Chew Valley Lake Sailing Club
Notice of Menu – To Follow (Circa £10 per head)
Dress – Casual or Other…

The meal will be followed by Prizegiving by Fleet Captains and the Sailing Committee, alongside Table Fun Courtesy of Menti.com and the Fun of Sailing.

James Williams, our new Sailing Secretary, will coordinate ‘bookings’. He would like those that want to come to email the sailing@chewvalleysailing.org.uk address and if they have a particular table request (say max 8 to a table) note that down as well.
Food may be paid for on the evening.

Finally, our long standing Trophy Monitor, Primrose Salt, is handing over the reins to Ruth Kenyon this year. We all owe a huge debt of thanks to Primrose for her hard work over many years. Keeping track of the numerous pieces of Club silverware, and having them ready to present when needed, is not an easy task.

A reminder that this weekend we are hosting the Gul Fireball Inland Championships and 420 Grand Prix. This promises to showcase some spectacular racing, with experienced talent in the Fireballs balanced by the ‘up and coming’ talent in the 420 fleet, bringing our open meetings for the year to a close.

General sailing will be permitted at the Race Officer’s discretion on both days, BUT please note there is NO club racing this Sunday – racing will resume on Sunday 14-Nov-21 with our winter series points.

Breakfast is a bit of a tradition in Police circles so at the last Committee meeting of the Police Sailing Section we decided we ought to organise something before Christmas as we hadn’t met for breakfast for the last two years.

We approached Antonia and Ben to ask if they could do something for us and the answer was a yes.

We have booked it for Wednesday 08-Dec-21 in the galley at 9.45am. To keep things simple it’s going to be a full English or vegetarian option with locally sourced ingredients. Unlimited toast, tea and coffee all for £10 each. I put it out on our own WhatsApp group and within 24 hours had 18 bookings.

I spoke to Antonia and Ben yesterday and we would like to open it up to all club members, Brian and Mary Brooks had already said they would like to join us.

To keep things simple if anyone would like to join us email me jeffstratford@btinternet.com to book, the closing date for bookings is Wednesday 01-Dec-21, you can either pay me or Antonia by then please. I will be at the Club next Saturday the 06-Nov-21 and Saturday 27-Nov-21.

We look forward to seeing lots of you.

The fleet delivered the goods and exceeding Pete Vincent’s challenge, with 36 competitors on the water for this year’s Ugly circuit finale at Chew; that is really quite some turnout!

A light start to the day greeted the fleet, with the overcast conditions set to improve throughout the day. Race one began and immediately set the tone for the day, shifts and more shifts, with no position safe on the race course, with plenty of snakes to fall back on or ladders to jump up through the fleet. The leading boat of Mark Oakey/Jess Smith, were battling for victory with Merrick Stanley/Victoria Upton, until a minor miss-reading of the number of laps, secured Stanley/Upton the win, with Chris Catt/Emma Norris in second, John Teague/Naomi Pound third, Henry Hallam/Ashley Hill in fourth and Oakey/Smith now dropping to fifth.

The third race threw a curve ball at the start, with some large shifts mixing up the fleet, and further big shifts leading to big gains and losses to be had. Capitalising best on the conditions, were Duncan/Lorna Glen, who were picking up the pace in the now building breeze from Stephens/Williams in second. Third place, pushing the stick hard and planing their way through the fleet, were Hallam/Hill, with Oakey/Smith in fourth and Stanley/Upton in fifth place.

Going into the fourth and final race, the event was still wide open, with several boats in the mix for the win, not only for this event, but the overall 2021 Ugly Tour title. The building breeze stretched the fleets legs up the beats, with the downwind legs a marginal choice between planing or soaking. Hallam/Hill firmly in the push the stick camp, took the win, with Catt/Norris in second and the Glens in third place and Teague/Pound on their tails for fourth, from the very consistent Stanley/Upton in fifth.

With the final scores in, Chris Catt/Emma Norris from Burghfield took the win after an exceptionally competitive days racing, with second place going to the Cornish duo of Henry Hallam/Ashley Hill from St Mawes, with John Teague/Naomi Pound from Bristol Corinthian in third place. Fourth place went to Merrick Stanley/Victoria Upton from Llandegfedd/Exe with fifth place going to another Cornish pair, Jeremy Stephens/Lloyd Williams from Penzance.

The Silver fleet was won by the local Chew boat of David Sweet/Anna Mason, from the Thornbury boat of Nick Smith/Hannah Metcalfe-Smith. The Bronze fleet was won by Milly Tregaskes/Taryn Banks from Restronguet, on countback from second bronze boat Reuben/Jo Woodbridge from Chew.

A big thanks to Chew Valley for putting on such a brilliantly fun, friendly and competitive event, the place was buzzing, great to see. It was good to see such a high home entry from Chew, and a large and far travelling Cornish group of boats. Of course this was also the finale of the 2021 Westcountry Boat Repairs Ugly tour, and it went down to the final run! The headline is that we have a new name going on the trophy, with Henry Hallam and Ashley Hill our 2021 Ugly champions! You’ll have to wait for a full round-up report of the series by sponsor Pete Vincent with all the details; needless to say it has quite possibly been our biggest year ever!

The 2021 Inlands were held at the beautiful Chew Valley Lake SC on 23/24-Oct-21. There was a forecast of lighter winds on Saturday, but a Southerly Force 4 gusting 6 expected on Sunday. Saturday was shared with the RS200s, giving sailors a little more to think about as the 100s started second.
Let’s explore what 10 things we learned:

To prevent any confusion with the club calendar list of events as we slide from one season to the next, ‘Chew Cruise’ is now officially renamed ‘Chew Valley Dinghy Cruising’. ‘Lunch on the Lake’ (previously Sale & Ale) will resume in the Spring, 2022.

A few brave participants ventured out last Saturday for an ad-hoc Lunch on the lake. What started out as glorious bimble soon morphed into a choppy and very wet bucking bronco! So all attempts to prepare a lunch afloat were abandoned, much to the delight of Antonia’s Deli. At least it was another opportunity to hone those emergency reefing skills. We certainly did experience all four seasons on that day. As soon as the boats were pulled ashore it was all flat calm and mirror-like, typical!

There is now a WhatsApp group to facilitate easy organising of last minute Lunches on the Lake, and indeed any other boat handling practice that takes your fancy, if you would like to be added then please let me know. See you at anchor!

There is still lots of sailing to be enjoyed as the weather cools and the lake fills up.
John Smalley 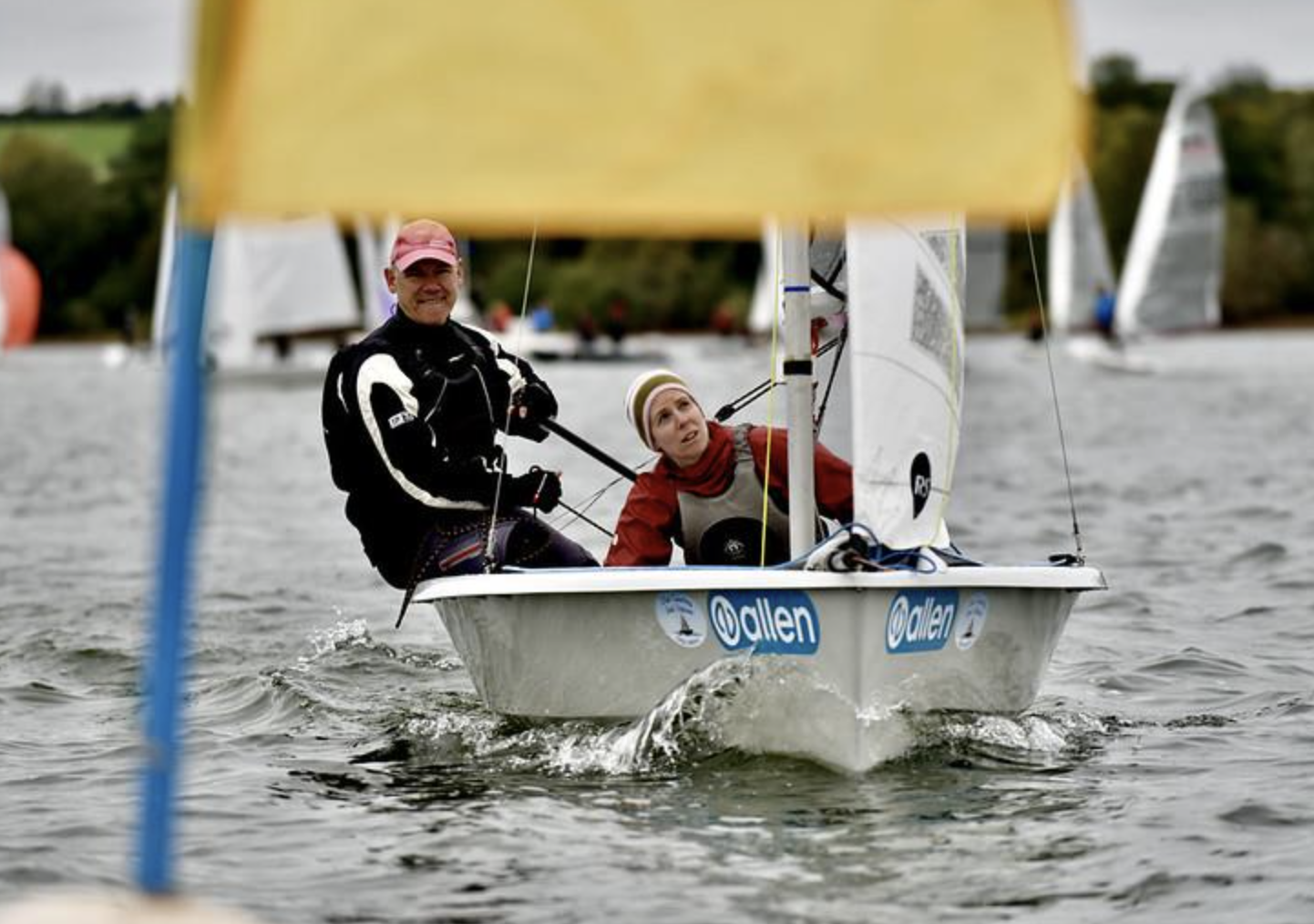 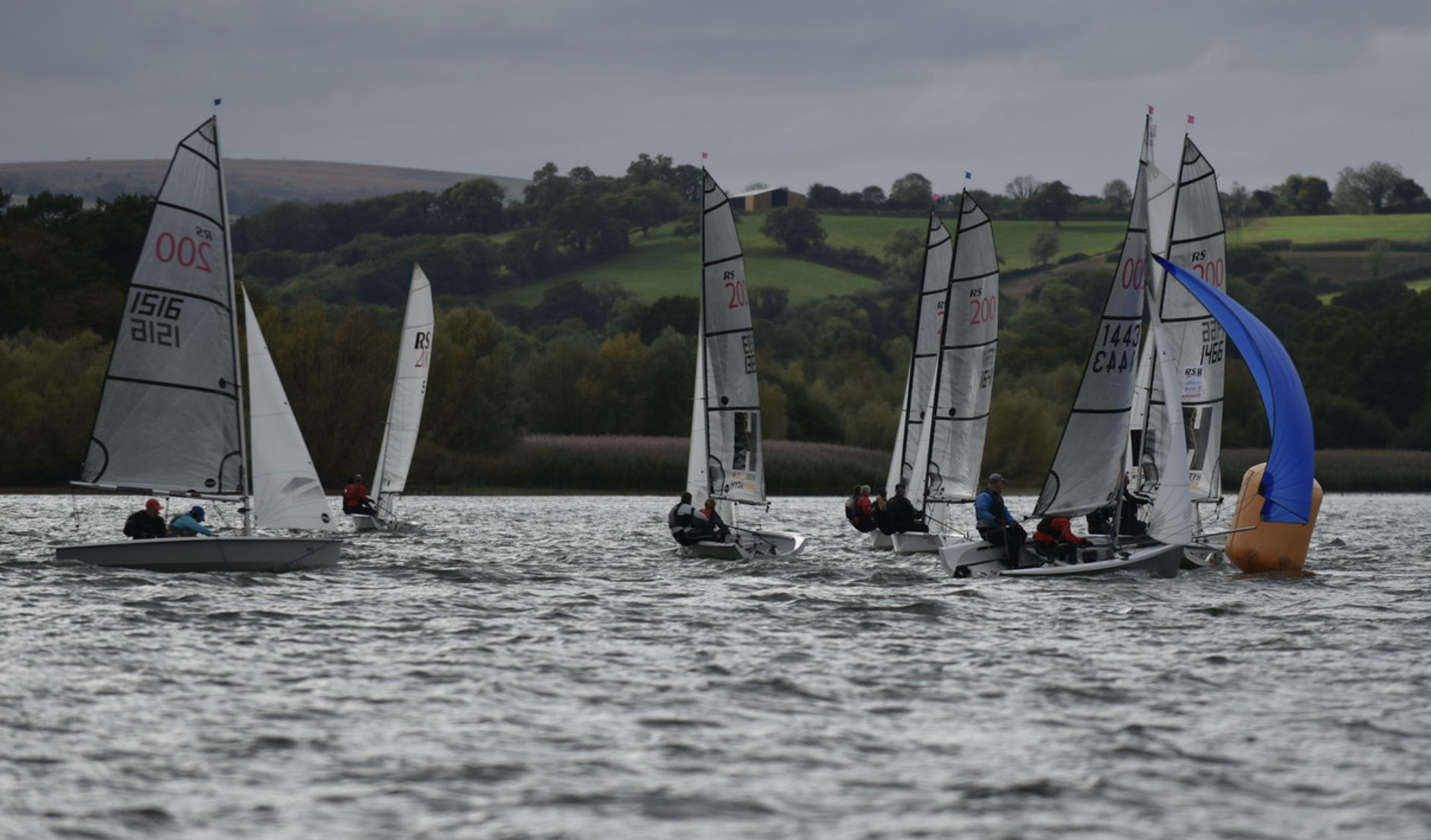 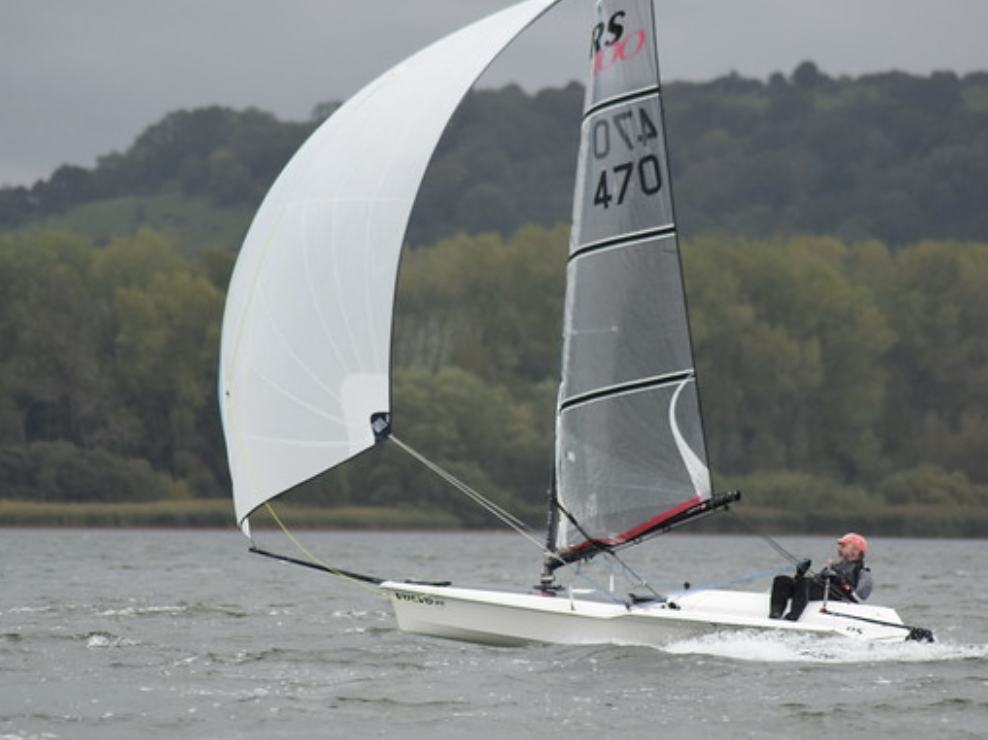 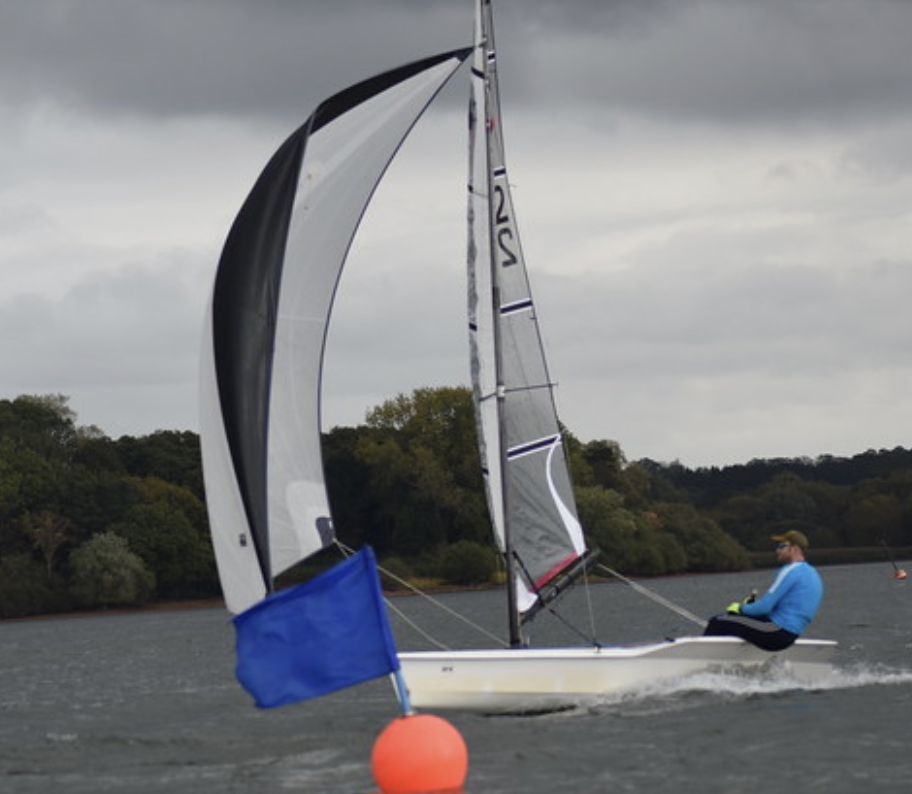 Could that be our own Musto Skiff flyer Jason Rickard  beefing up for a 100? 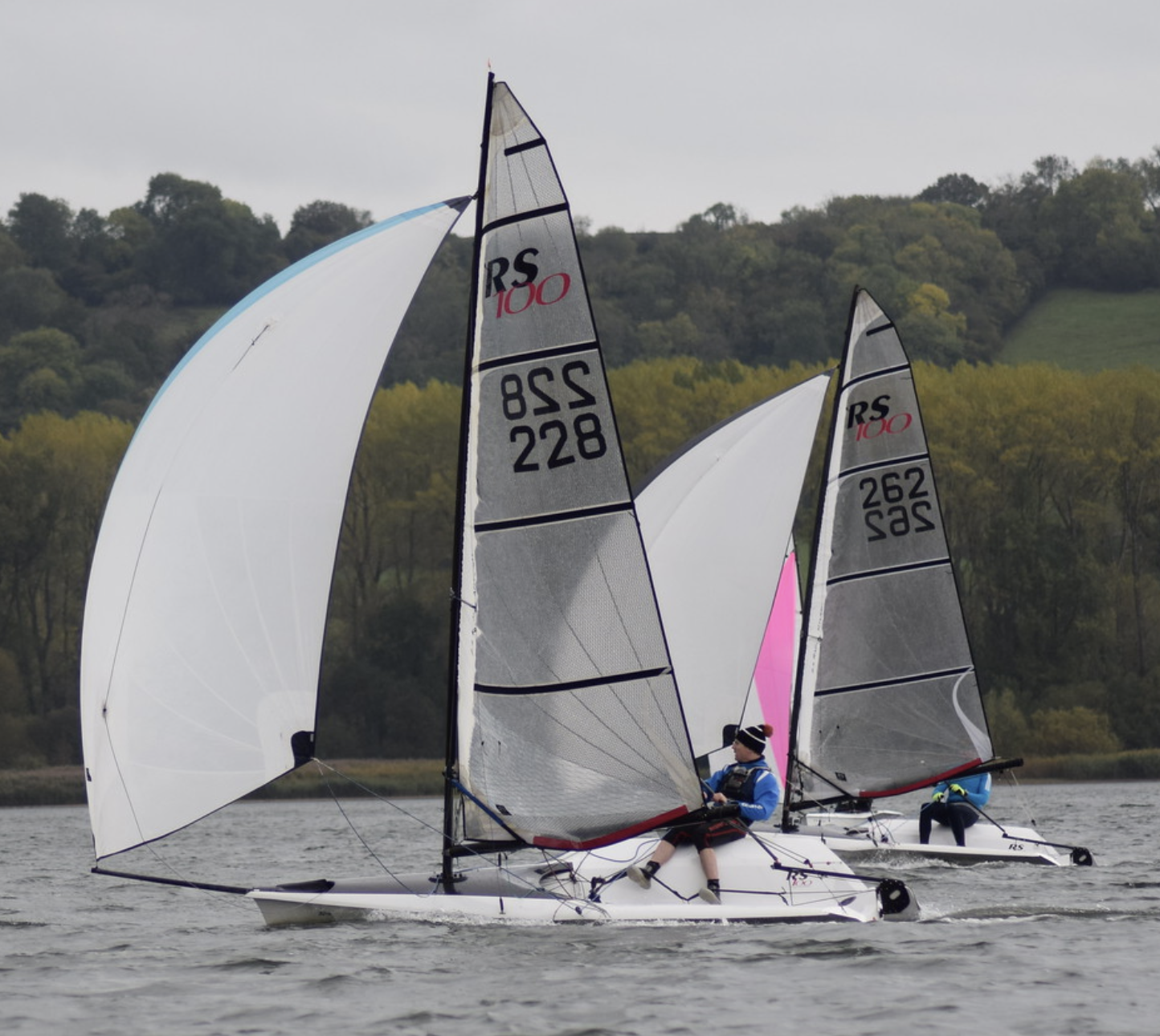 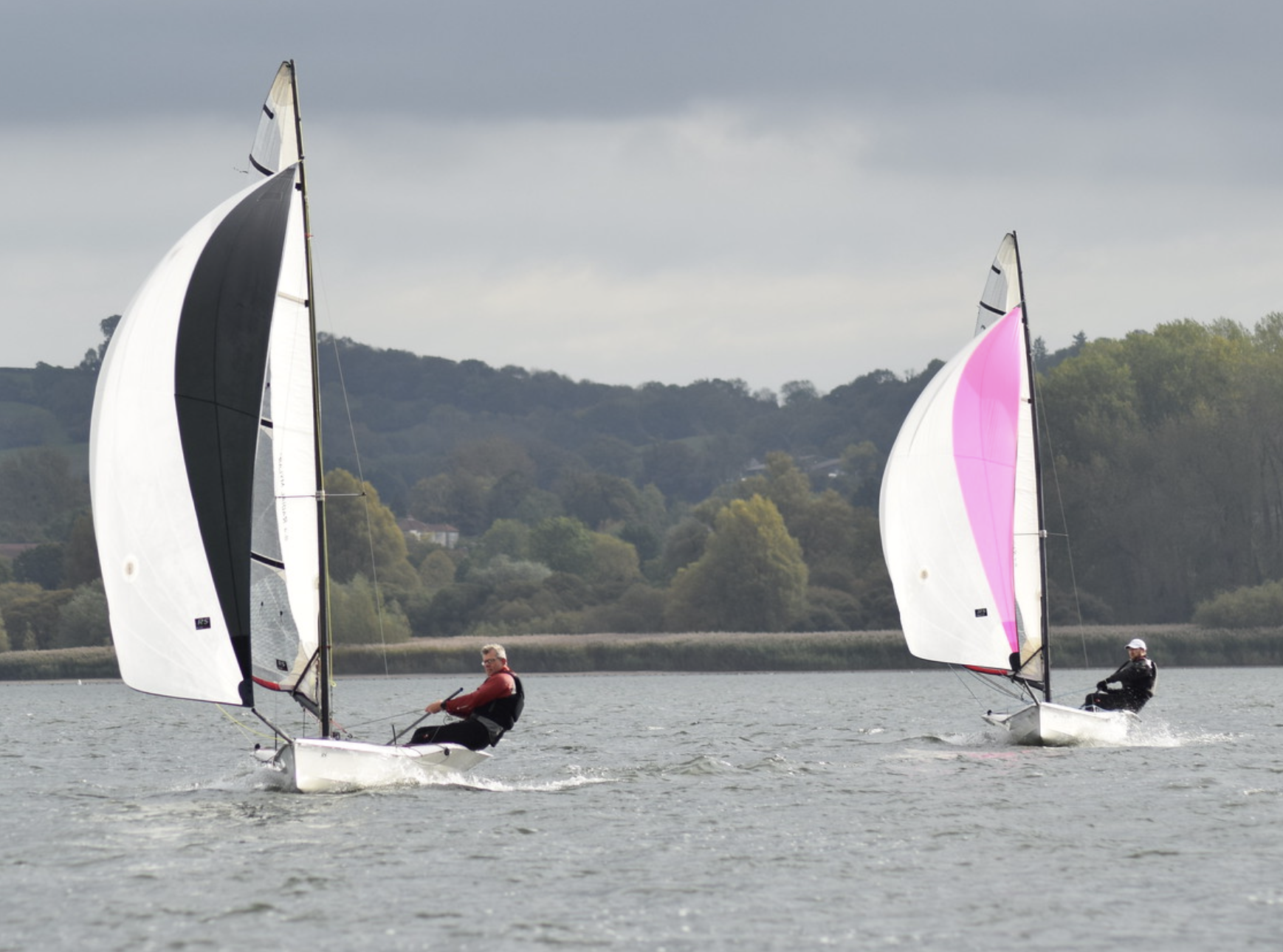 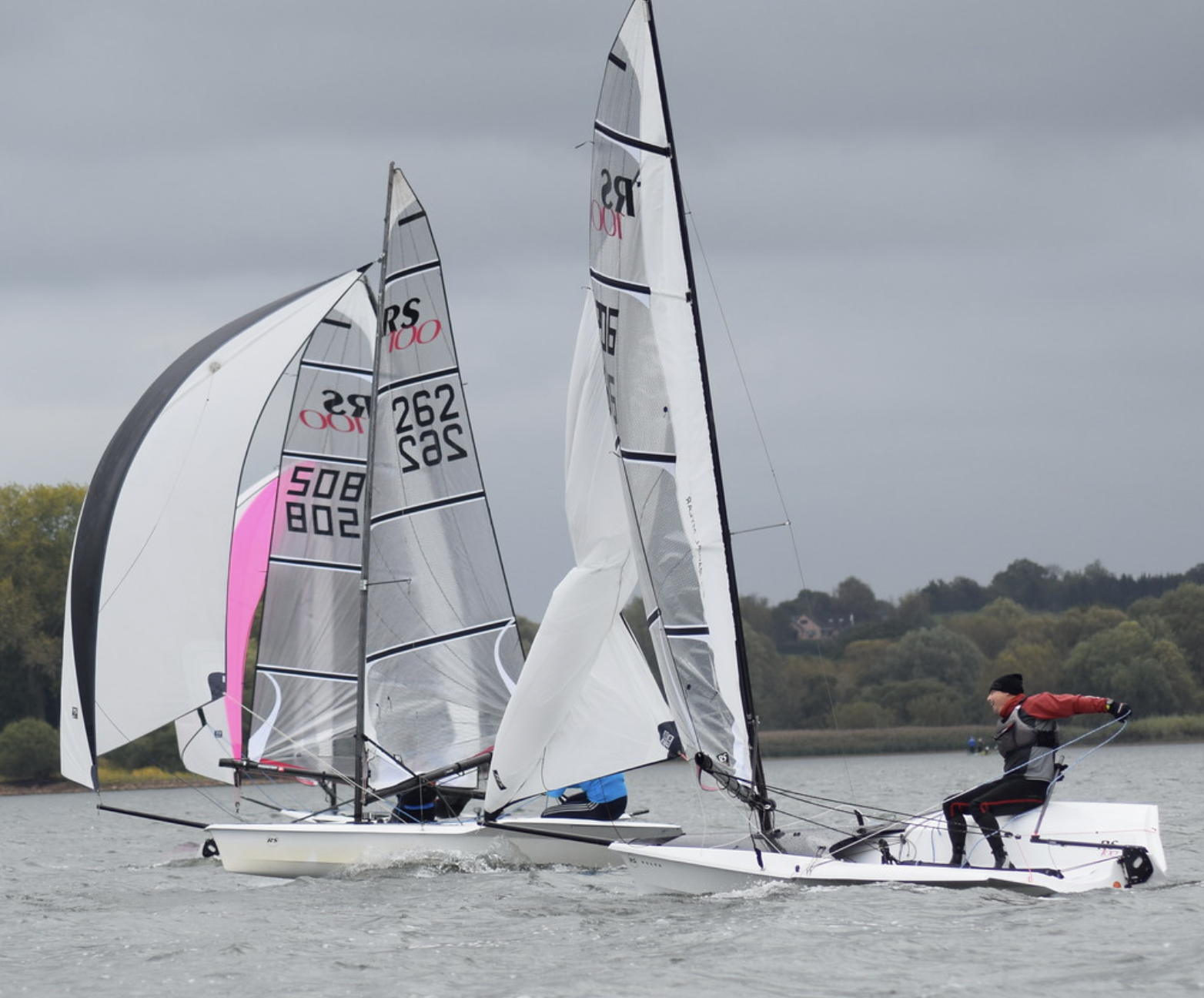 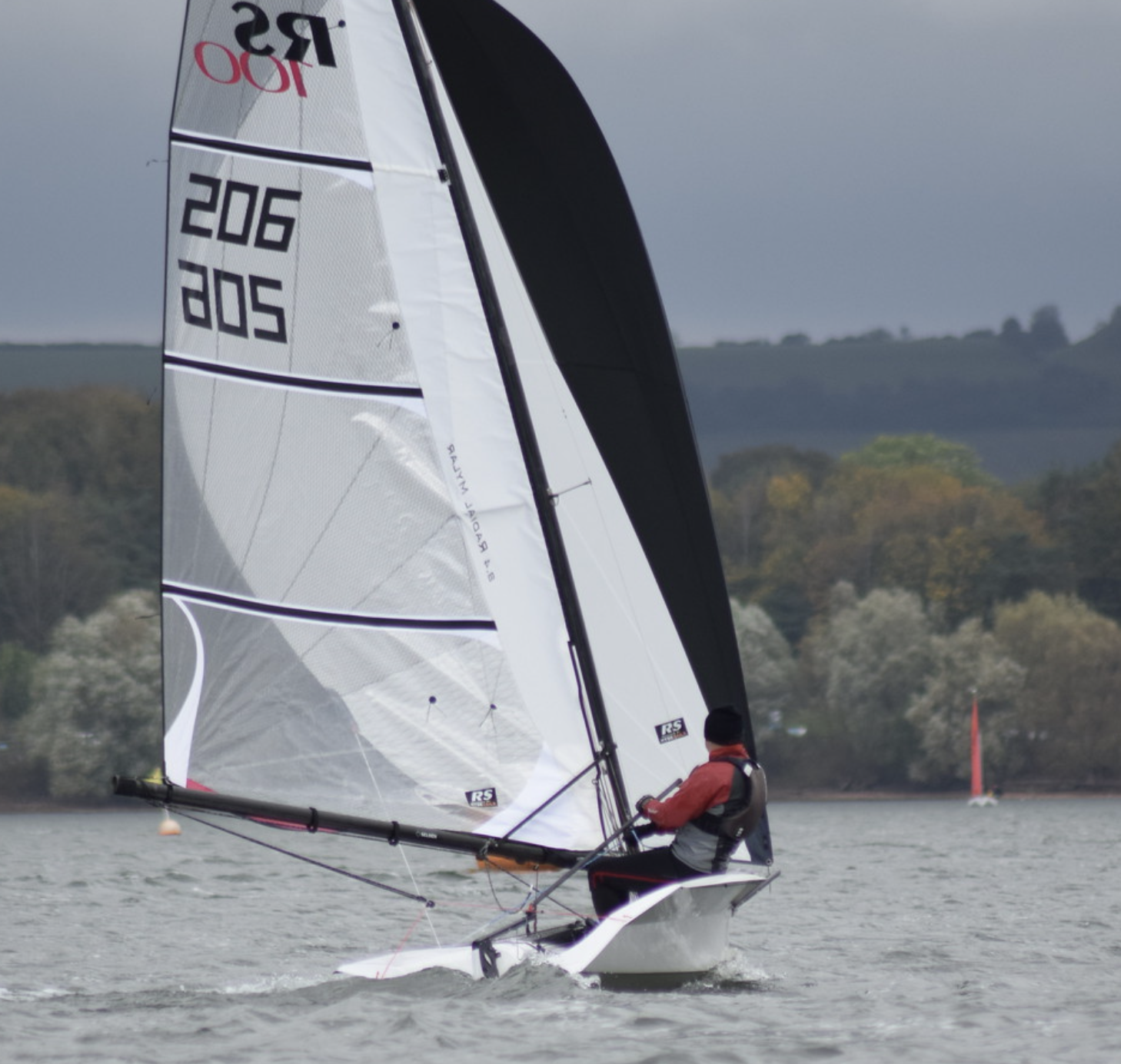 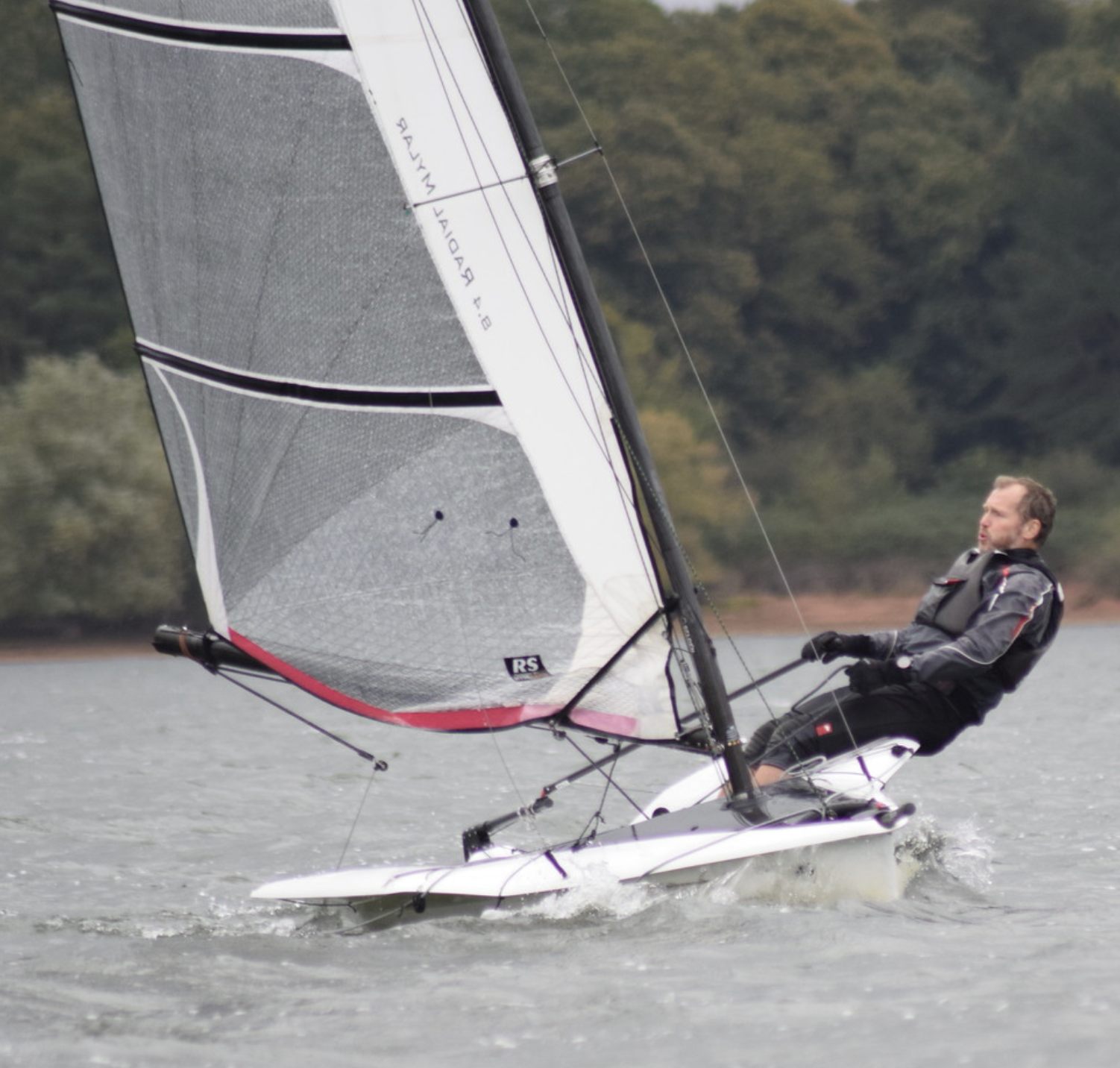 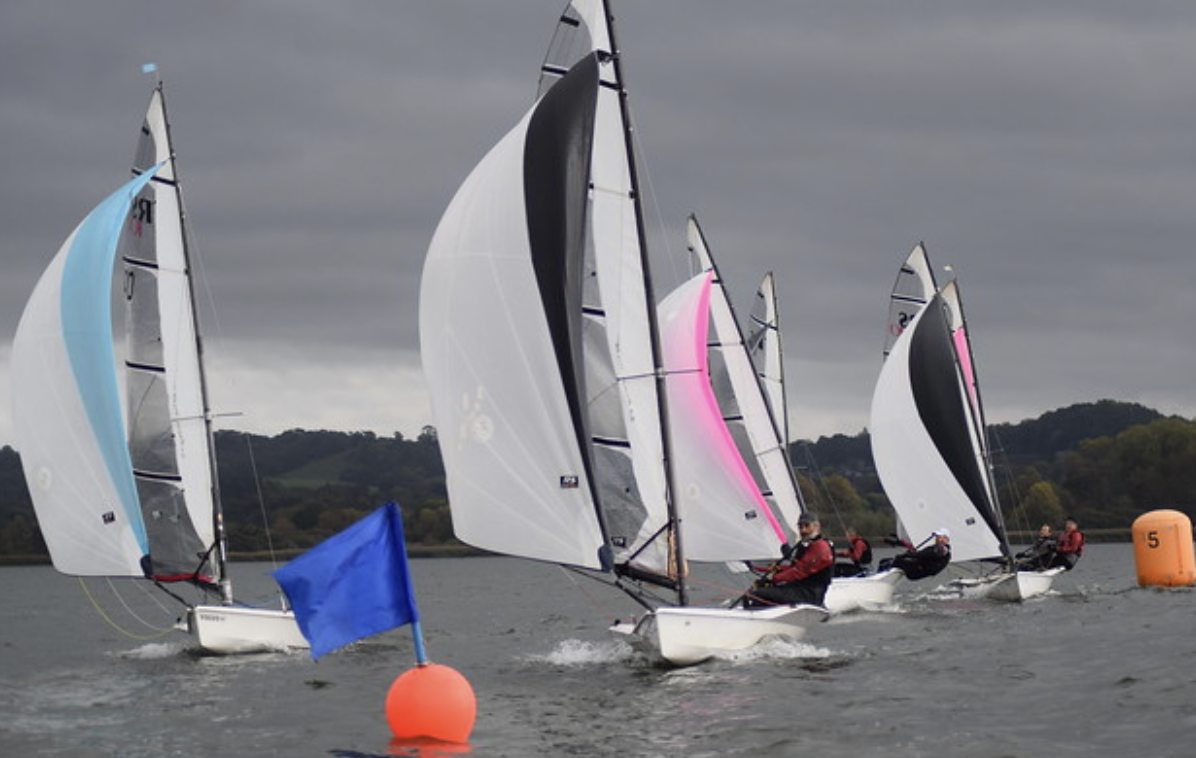 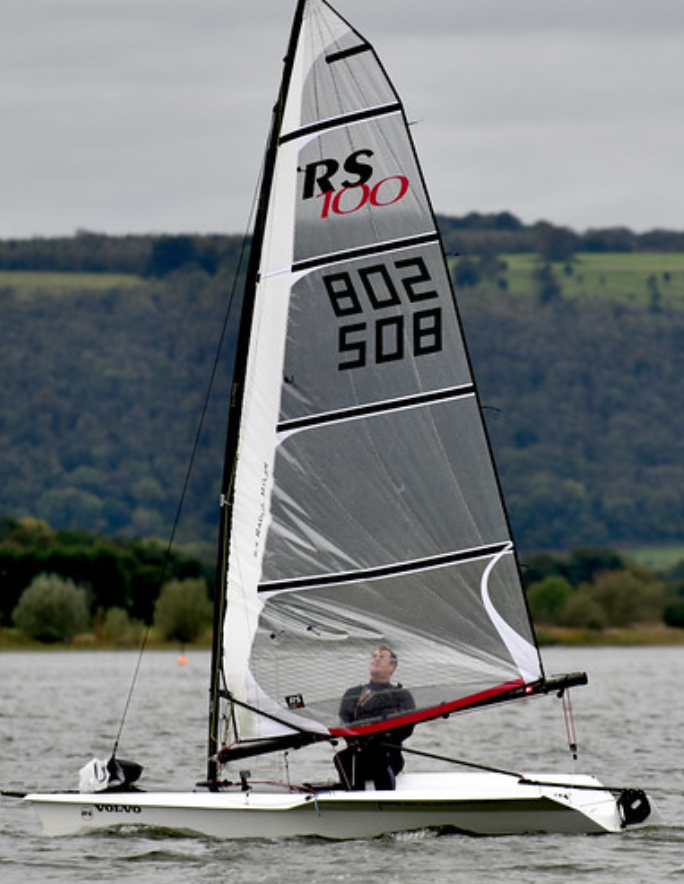 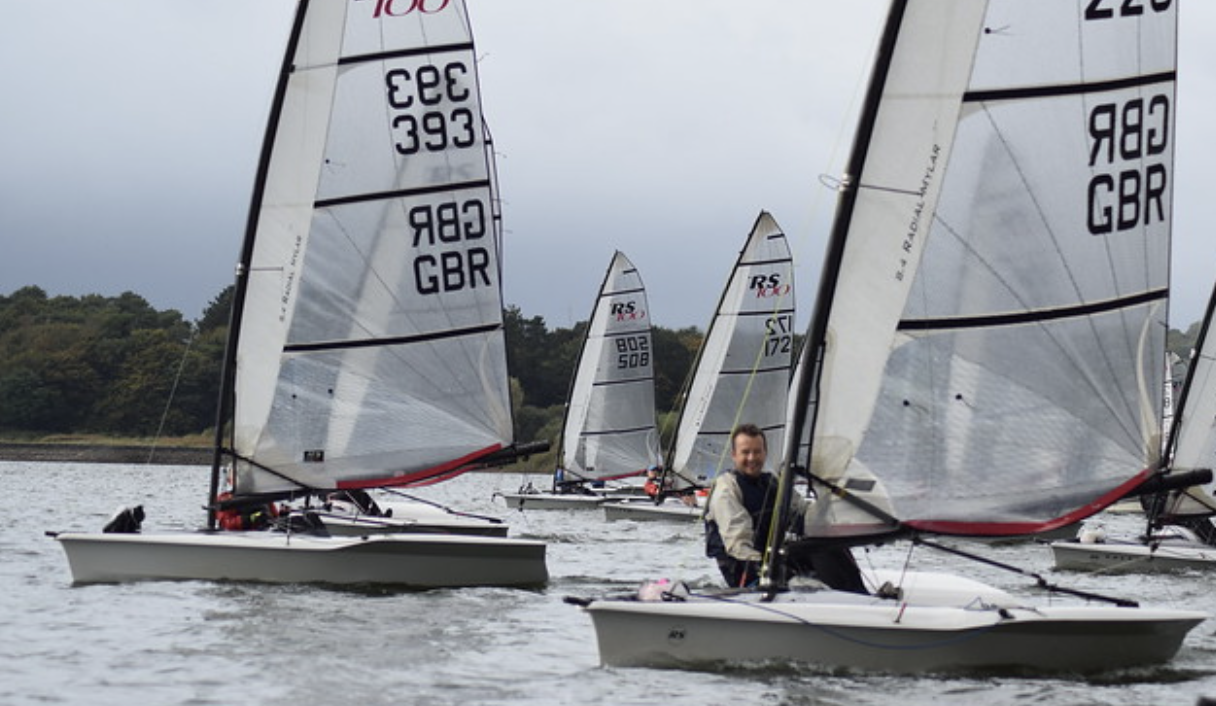 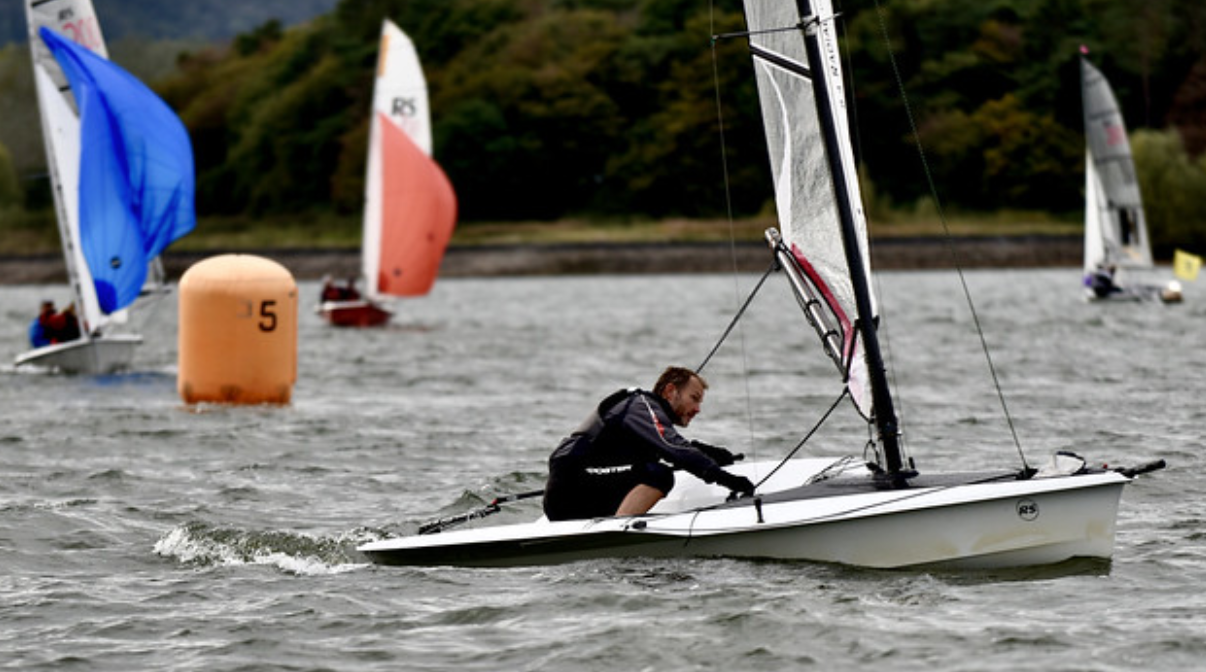 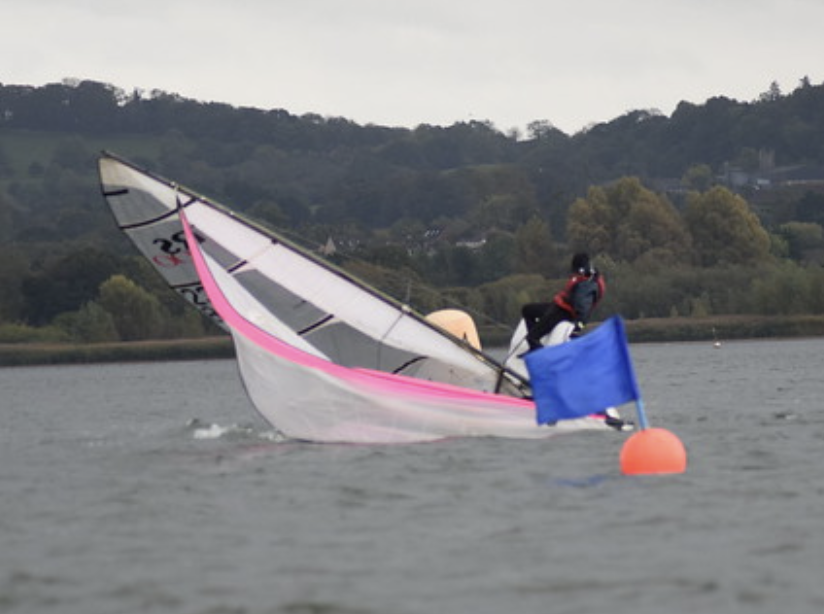 Oh dear – so close to the finish!