This weekend has the added bonus of a bank holiday Monday to sail on as well, although I’m struggling to get a full duty team together to cover it – if anyone is up for being OOD on Monday 5th that would be really great! A Rescue Crew volunteer for that day would be brilliant too. If you can help please volunteer via Dutyman or contact duties@chewvalleysailing.org.uk

Later next week we are also in need of a Rescue Helm for the daytime sailing slot of 10am-4pm, and a Race Officer for the Wednesday 7th evening practice race, as Colin Evans is not allowed to travel out of Wales yet… As it’s a practice race it might suit an ARO that fancies a go at running the show – you’d need to be at the club by 5-5.30pm for the race start time of 6.30pm.

Big thanks to everyone that has already volunteered for a duty or two – it really helps me, and gives you control over when you do your duties.

What is happening this weekend?

It was fantastic to see so many people launching enthusiastically into almost zero wind on Wednesday, I think everyone breathed a collective sigh of relief that we are now finally able to get back onto the water.

With more wind ( and colder weather) coming, this weekend should offer a chance to properly blow the cobwebs away, with sailing possible on Saturday, Sunday and Easter Monday.

Don’t forget, to sail or race you must pre-book by 6pm the evening before sailing (links will be sent shortly in a separate mail)

Sunday sees the start of our Spring racing series with two morning races scheduled back to back from 10.30. As advised previously, we will be back to just three fleet starts, the handicap fleet, followed by the Lasers and then the solos.

As before, the handicap fleet will all start together but be able to choose on the booking form to race on either a conventional course or one that is predominantly windward leeward.

The trial we had been running before lockdown for the laser start has come to an end, so we are reverting back to the old sequence whereby the radials start ahead of the main laser start, and the 4.7s 2 minutes.

Although we had previously planned to run just the Spring series morning racing for a couple of weeks until mid April, our race officer on Sunday, Dave Smart has offered to run a special ‘Easter Egg” race on Sunday afternoon. So, while previously unused sailing muscles may be feeling a little sore after the morning races, why not add to your exhaustion and join us for the afternoon race too?

The Easter egg race will comprise a single start all in handicap race no sooner than 1pm. This will be a ‘serious’ race with a fun side, with chocolate eggs on offer to the race winner and then awarded at random throughout the rest of the fleet to those most catching the race management teams’ eye (interesting manoeuvre, striking new sailing kit, best Easter bonnet, sportsmanship, endeavour, enthusiasm…that sort of thing).

So, don’t rush off after the morning racing, enjoy a suitably social-distanced lunch break, treat yourself to some sustenance from Rob’s galley, and then try and win yourself an Easter egg!

Enjoy the racing, I will look forward to joining you on the water whether you are sailing or racing.

The Strange Tale of the Missing Optibats

Early on in the first lockdown – yes over a year ago! – two of our Optibat dinghies disappeared with the telltale signs of two trolleys left on the slipway. The assumption was that some interlopers had pushed them off into the lake; whilst we hoped that they had not in fact been aboard them, the uncertainty of when it actually happened meant we could not have helped them anyway.
As autumn came on a neighbour of Helen’s, who is a volunteer bird watcher, spotted one of the boats and took Helen on an expedition to find it. By this time the tide had gone out and the boat was well and truly high and dry and would have been a problem to recover. But Helen took a picture, which showed the boats number and recorded its position on the amazing ‘three word’ app.
Fast forward to last week and the fishing rangers found an Optibat floating on the lake and planted it on their slipway – but it was not the same numbered one as in the picture. Having asked them nicely if we could ‘have our ball back’, permission was sought for an expedition to locate the other one and re-home it.
As the pictures show, this involved Simon Conway and Helen following the app’s directions on a kayak towed to the area and entering the 6 foot high reeds – they disappeared from view! But after much splashing and the occasional glimpse of a raised paddle, they emerged with the Optibat, full of water inside and out and looking rather mucky, but otherwise none the worse for 12 months in the reeds!

It was a real pleasure to see so many happy faces at the Club yesterday – I think this latest (last?) lockdown has been hard for us all. Despite the lack of wind (and an unhealthy number of insects!), many galleons were lovingly cleaned and rigging bimbled! Hopefully all the preparation will pay off on the water in the coming weeks… 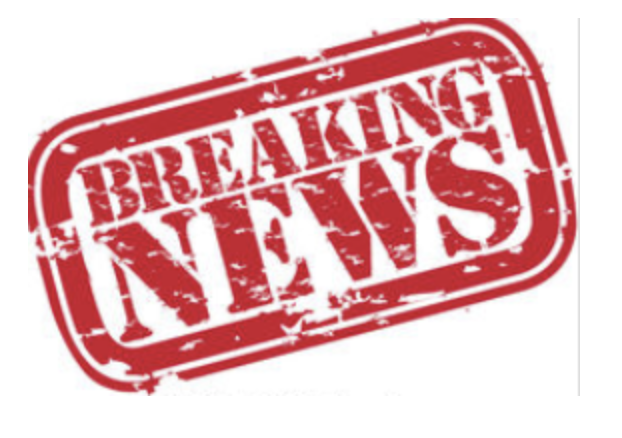 Back to ‘real’ racing this weekend 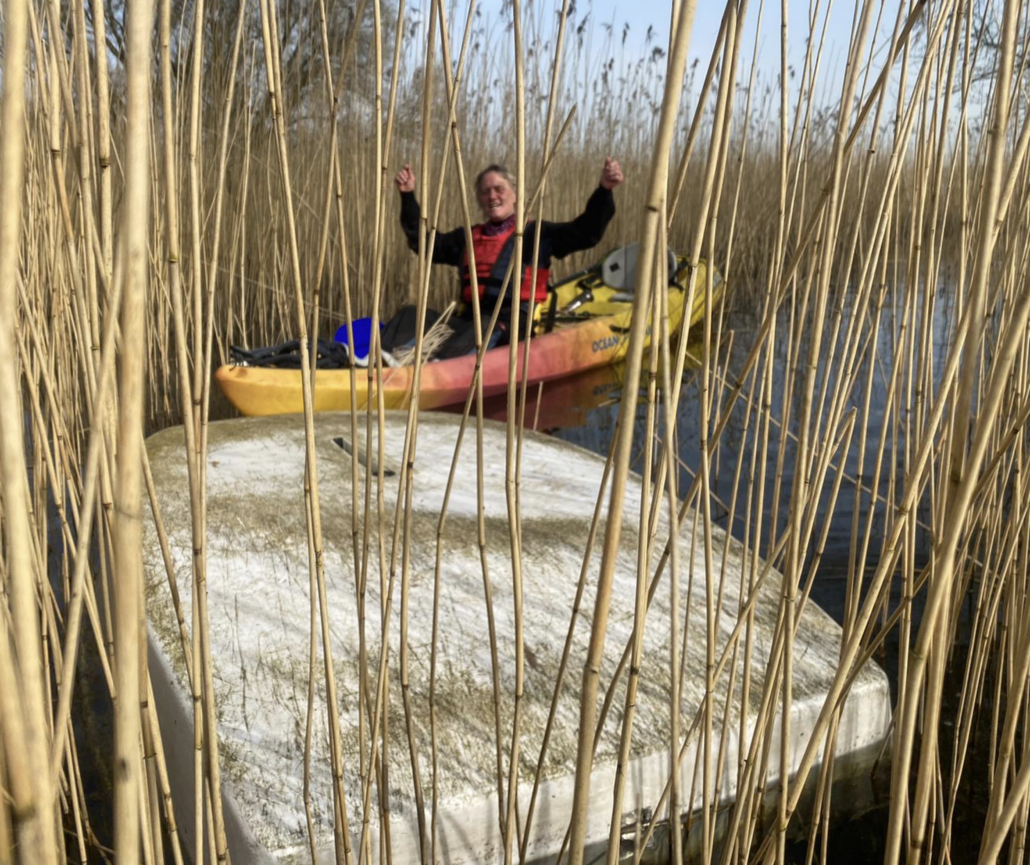 The ‘lost’ Optibat nestling in the reeds 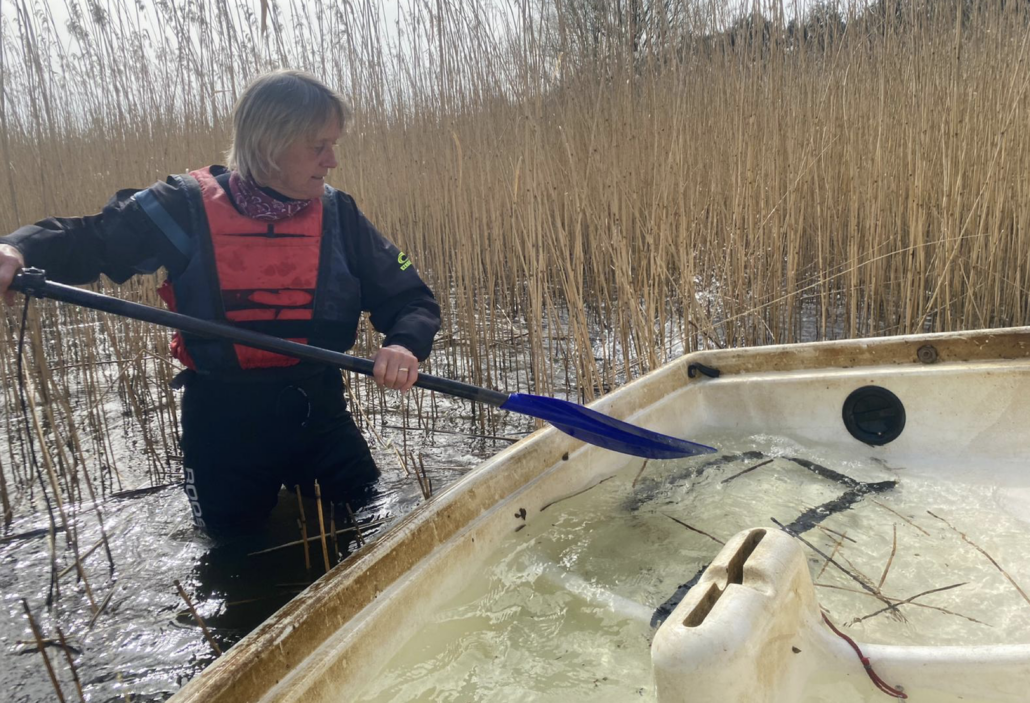 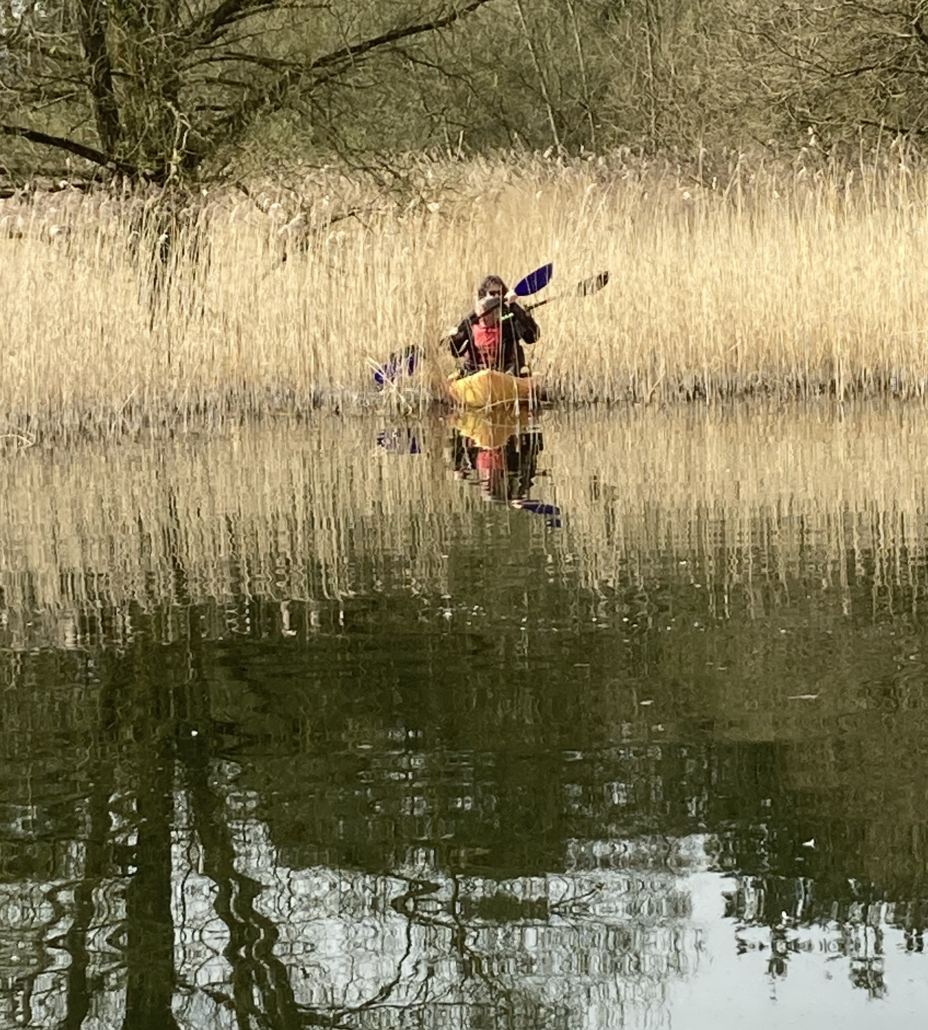 Emerging from the reeds. 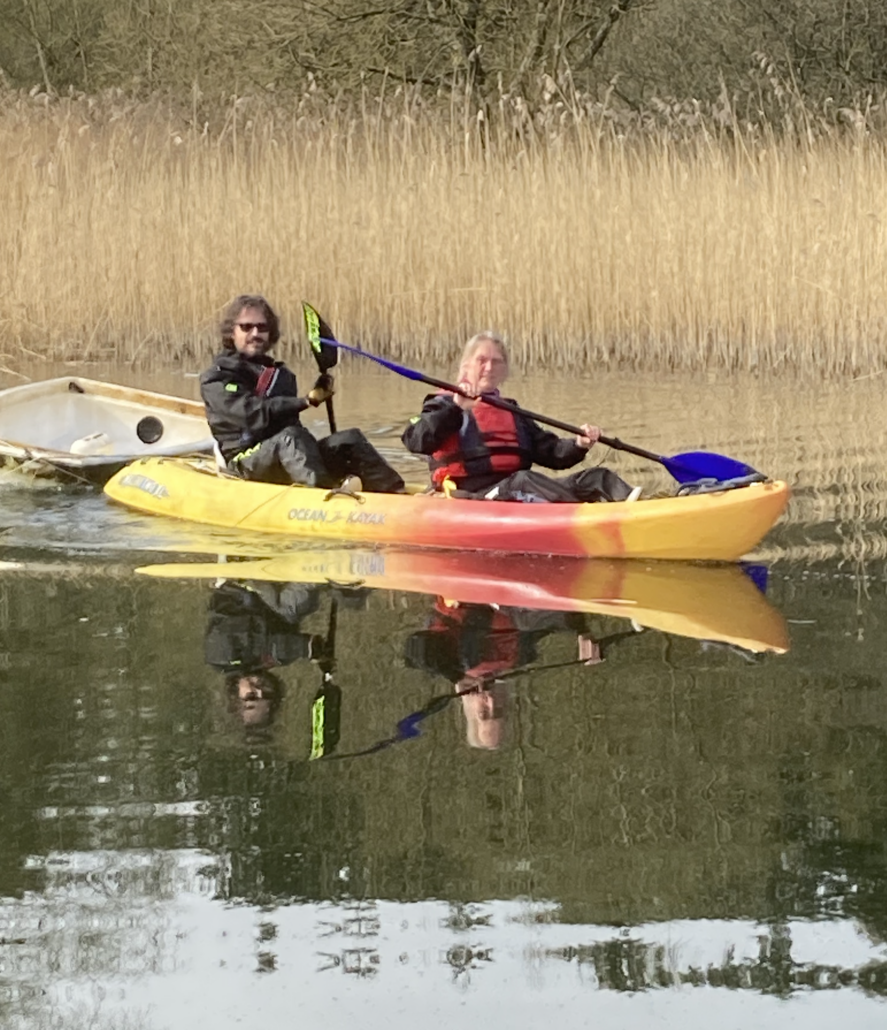 Success – Thanks to Helen and Simon Conway