John Smalley’s article in the May 2010 newsletter provides a lovely summary of Mike’s contribution to the club. He has added a short postscript to bring it up to date. 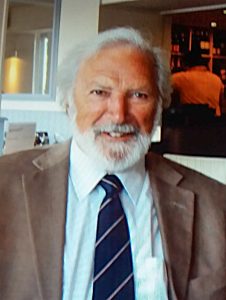 “It is with real sadness that I have to tell you that Mike Bracey, our most honourable Honorary Bosun for 29 years, has informed the Committee that he will be hanging up his Bosun’s cap for the last time after this year’s AGM. This scenario has had the occasional mention at Committee meetings but has invariably been discounted as Mike seems to look younger each year! People will say that no-one is irreplaceable, but when Mike Bracey stops, everyone will fully appreciate just how much he has done for the Sailing Club over all these years.

Mike and Mary’s first contact with the Club was in the early 70’s, when they owned the garage in Chew Stoke and were asked to store dinghies through the winter because they had to be removed from the Club grounds – sailing was a warm weather activity in those days! They were invited as guests in 1974 by Bill Guard, for who their son was already crewing, and shortly joined as members.

Mary was the first to get ‘involved’ as Galley Manager. She remembers that Committee meetings in those days were held in the Junior Chamber of Commerce in Chew Magna. After Mike had demonstrated his engine expertise by helping out, the then Commodore, Peggy Taylor, asked him to take on the role of Bosun in ’81.

In those early days the Club had just two Dorys and a Committee Boat. The engines were hand started and they steered by wire cables! Mike was responsible for purchasing the boats, looking after them in every way and teaching members to drive them, and all as a volunteer. He introduced the Club to hand held radios.

CVLSC has grown in the last quarter century to become the busy popular Club we are today. We now have 4 RIBs, and outboard tender and two Committee Boats. Each one gets heavy, year round usage to cover our racing and pleasure sailing, as well as the intensive winter training of Juniors and Students. The servicing and repair needs necessitate many hours of work for Mike who, despite the ever increasing demands on his time, has remained totally committed to maintaining the boats to enable our ambitious programme to happen. Engine servicing and replacement is carried out in double quick time when each boat can be spared.

Our large Committee Boat is lovingly cared for during the winter months when Mike can spot a gap in the schedule of its use. This has been perhaps the biggest and most frustrating change from Mike’s perspective; 30 years ago there were months of ‘down time’ for all the boats. Now they are used intensively all year round.

Over the years Mike has dealt with the catalogue of repairs we members have inflicted on the boats; rigid hulls colliding with concrete jetties, RIB sides punctured, propeller guards smashed, keys broken off in the ignition to name but a few! Honesty when mishaps happen is definitely the best policy, but I have seen grown men quake at having to explain to Mike that this or that accident has occurred! However, all such traumas have been dealt with and the boats fixed, usually ready for use again the following weekend.

Mike’s philosophy is that “you only get out of a Club what you put in.” It would be impossible to quantify the hours he has spent being our Bosun, and perhaps more impressively, the many thousands of pounds he has saved the Club by his voluntary efforts. We were all hugely proud in 2006 when Mike travelled to London to be presented with an RYA Community Award in recognition of his efforts for CVLSC.

Over the years I have known him, Mike has been a stalwart supporter of the Family Regatta, taking charge of the Committee Boat ferrying folk to and from Denny Island. He and Mary have long been active on behalf of the RNLI, particularly manning a table selling Christmas cards in November and December. He is a senior member of the ‘Wednesday’ crowd doing his bit to keep Brian Brooks and Co in order!”

A postscript from John, September 2019

As we all now know, Mike continued to enjoy his time at the Club after the AGM in 2010.

The Trustees and Committee placed huge faith in him when, in February 2013, he was entrusted with keeping me reined in as we tackled assessing and purchasing the Pirate 21 ‘Seabreeze’ to replace the sunken Committee Boat.

During this time I got to know him much better.

I recall well the trip to Saltash to test drive the boat. It was a journey I had made many times (we had a house there at that time), but I well remember it seemed to be the shortest journey time ever, both there and back,  as Mike regaled me with tales of the Chew of old, his family, Mary (who I did not realise had been a dental nurse!), and his boating both at Chew and on the ‘big boat’.

I think most moving of all is his belief that ‘you only get out of a Club what you put in’. If only we could all adopt that mantra….

He was a wonderful man with a big heart; I liked him and will miss him.

And a final postscript.

Both Alan Coventry and Steve Turner wanted to acknowledge all Mike’s help and guidance in their respective times as Bosun.

We should note too that Mike was a Trustee of the club for many years.

And wasn’t it great to see him, determined as ever, managing poor sight and limited mobility, out on the water sailing with CLADS last year!