The 4 day RS Feva Nationals were held over the Bank Holiday weekend (+Tuesday!), with the three Chew teams enjoying the relative close proximity of Weymouth on a busy bank holiday Friday evening.  The forecast was fairly variable, and with a 106 boats registered, the Chew teams all had their personal targets for the championship.  The first 2 days were spent on the qualifying series.

Day 1 was warm, sunny and a relatively consistent 12-14 knots.  A great way to kick off the regatta.  Will and Ben, their first time sailing together in a competition, and Wills first major event started strongly with a 39th and 38th.  Ted & Rupert scored 17th, 14th and 28th putting them nicely into Gold Fleet, their main aim for the event.  Quinn & Fin were 16th overall scoring 9th, 5th and a 15th.   The competitors were re-flighted overnight, and woke to find that Day 2 would be a much lighter affair with 6-9 knots blowing across Portland Harbour.  Will and Ben had a more challenging day as the more regular teams got into their groove, and the competition began to heat up.  They scored 44, 41, 45 across the 3 races leaving them in 86th place.  Ted & Rupert had one of those days when nothing seemed to quite click, and were bitterly disappointed with their 34th, 34th & 29th.  They were dealt a further blow when they found out they had slipped out of gold fleet contention, and were now assigned to silver fleet for the remaining two days of the competition.  Even the fact that they were currently placed first in silver fleet seemed scant consolation to them. Quinn & Fin had one of those other types of days, when things just seem to click, and came off the water with a 2nd, 8th and 4th, putting them in 9th place overall, and a shot at a Top 10 finish in Gold fleet, well above their target of a Top 25 finish.

Day 3, and the top half of the fleet from the qualifiers would be racing in Gold fleet, and the remaining racing in Silver fleet.  The teams would be carrying their place from the qualification series as a non-discardable score in the final series.  The dinghy park was buzzing, but sadly no one had told the wind.  It was hot and humid, with a very light and shifty breeze.  After an hours postponement, the patient Race Officer and competitors managed to complete one race, but the day was finally ditched after a couple of repeated attempts to start failed, and races were abandoned with spinnakers flying on the beats.   Team Chew somehow came through the day in one piece, though everyone slipping a few places.  Will and Ben scoring a 44th, Ted & Rupert slipping into second in Silver fleet with a 13th, and Fin & Quinn scoring a 17th but were still clinging onto a Top place in 10th overall.

Day 4 was always going to be a big day.  But now it was an earlier start, 4 races back to back – effectively 2/3rds of the championship on a single day.  And to top it off the forecast had anything from 10 – 30 knots with rain and cloud thrown in for good measure.  It would be a day for stamina, strength, concentration, and likely a bit of extra weight.  As the competitors launched the wind was averaging around 18-20 knots and the lighter boats were raking masts back to better handle the conditions.  An hour later, just before the start of the first race of the day the wind dropped to just 3 knots.  Well-practiced, Quinn and Fin pulled out their lower set of shroud fast pins on the water, re-tensioned the jib and were ready for the sub 10 knots.  At that point the breeze kicked back in again, this time at plus 20 knots.  In those conditions there was no chance to rake the rig back on the water and so they set off to do battle as best they could.  In gold fleet it was definitely a day for the more experienced boats, and generally older and heavier sailors. Fin & Quinn discarded a 32nd and counted a 28th, 18th and 23rd, putting them in 20th overall (though they could argue 17th in the National Championships if you remove the visiting Dutch  Feva sailors who were competing in the Eurocup event as part of the UK Nationals!).  They were happy to have beaten their target of a Top 25 Gold Fleet finish, but a little disappointed to have slipped from the dizzy heights of a Top 10 finish.  In Silver fleet there were battles across the whole fleet, with the first 5 or 6 boats pulling well clear of the rest of the fleet in the majority of the races.  Will and Ben had a great days sailing with three results in the 30’s and finishing in 44th place overall in Silver fleet.  Ted & Rupert, with the disappoint of missing out on Gold fleet completely forgotten, had an epic day with the winds now averaging up to 24 knots.  Every race was a battle, and they pushed when they needed to, and consolidated when they could, scoring a 5th,3rd, 4th and 2nd to give them first place overall with a very healthy margin. It was great to see them on the top step of the podium along with 2 other boats from their South-West squad on the steps below them.  They are Kings of Silver!

Overall a great event with very varied conditions. The Chew teams all did brilliantly well, had fun and learnt a huge amount. A real testament to all the practice and hard work they put in over the winter.  The teams are now taking a quick breather before readying themselves, with a training day, for the Feva Inland Championships here at Chew on 16th/17th June.  Should be a great one! 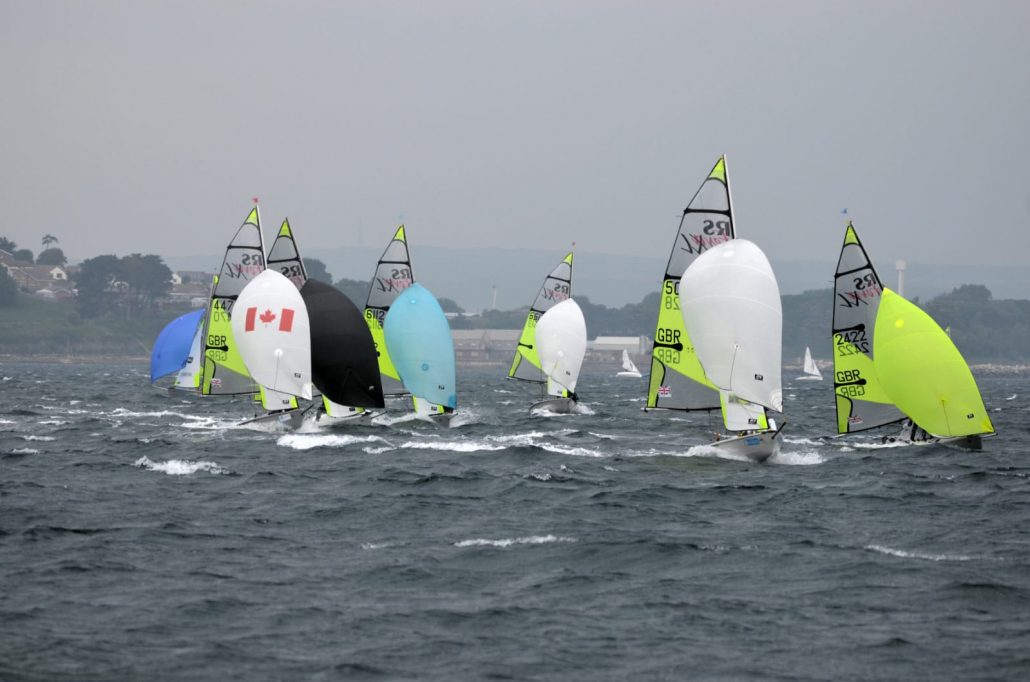 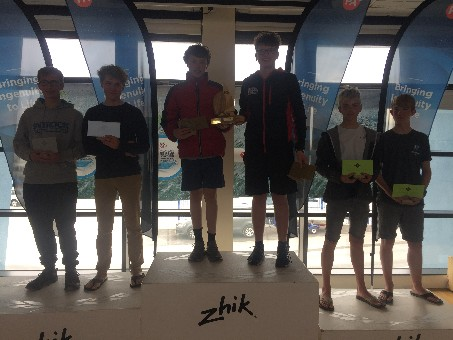