A Christmas Carol without Scrooge 16-Dec-18

A Christmas Carol without Scrooge

To those of us who are retired sailors or can possibly grab a Wednesday off work, (funny word that) can all appreciate the pleasures of sailing on that day; albeit only up until around 14.00 hrs. But then again most of us are on the water by 10.00 and so if the “Flag” is not hoisted by that time we send Pete Cheek to investigate. I can only say God help the poor duty crew when Pete locates them.

We can share these delights of sailing for 51 weeks of the year which always culminates in a Christmas lunch for the sailors and their partners at the club on a Wednesday in December.

This event has grown in numbers from something like 8 guys (women were banned) bringing their sandwiches and a bottle to the club and placing all the sandwiches on a plate in the centre of the table and then tucking in.

This went on for around 28 years; you could say it became a habit, but a habit that changed in 1995 when wives and lady sailors of the club forced the issue by getting themselves involved. – my wife Mary being one of those ladies. We were all given a sheet of paper telling us what we had to bring to the table and I must admit that this organised method worked well. Well done ladies.

What this new system did do was swell our numbers at the table and soon we were trying to cater for around 30 members, with Mary sorting out what each attendee was expected to bring along.

This was ok for a while, but it became a chore. So about 10 years ago we approached the then incumbent caterer and asked if he was prepared to put on a full three course meal. “Yes” was the response; well the rest is history. The attendees at these Christmas affairs now total something between 55 to 65 participants each year.

This year we entertained 54 members and partners and all went well; Hmm well not everything went that well.

The usual trip Christmas to Little Denny to hold a carol service for members who have passed on to pastures green was a very very wet and cold affair. I think I counted 18 of us on the Island all shivering and very wet.

This was to be a particularly poignant event this year as three of our members had passed away this year; Sarah Lovell, Dorothy (Dot) Macklin and John Belcher; all Wednesday sailors. So, it became a service of remembrance. Our resident Rev Cannon Melvyn Mathews was unable to attend this year, so he gave Ann Belcher the order of service to be used on the Island.

Problem was the rain had got to the pieces of paper. This led to them rapidly falling apart as well as sticking together and obliterating some of the words. We wondered if this was John having the last word, anyway we got through it successfully and we then headed back to the clubhouse.

The room looked magnificent as did the tables, most of the work having been carried out on the Tuesday which was down to my wife Mary with me doing the heavy work, like folding the napkins. I hasten to point out that our Commodore had organised and been part of the team that had already decorated the hall.

Now we come to the first embarrassing episode. I got up at the beginning of the meal and asked that we remember those members who had passed away during 2017. I managed to get Sarah Lovell and Dot Macklin right but instead of mentioning John Belcher I actually said, and I quote “We must remember John Shimell who passed away earlier this year” I immediately realised what I had said and immediately corrected myself, but not before there was much laughter from most of the assembled members (Including John Shimell who was sitting right next to me). Fortunately for me Ann Belcher was highly amused – as was her daughter. John S also saw the funny side, But I am not too sure I got away with it without some criticism.

The meal then proceeded with its normal joviality and, from the comments I received, it did appear to be its usual success.

No Christmas event can pass by without Peter Cheek getting himself involved and into deep water. He tries to mean well but unfortunately his diplomacy needs a little polishing.

Mary and I keep saying that “this is the last year we will be organising this event” But, each year we relent. Mind you if there is any one of you interested in taking it on then you won’t get a fight from Mary or me.

Like to join us? Then get your face known on a Wednesday – you will love the casual sailing and the comradeship. Oh, and the Christmas Lunch.

Many thanks to Avon and Somerset Police Sailing Club Yet again. 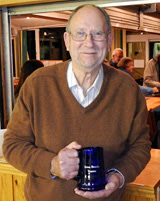