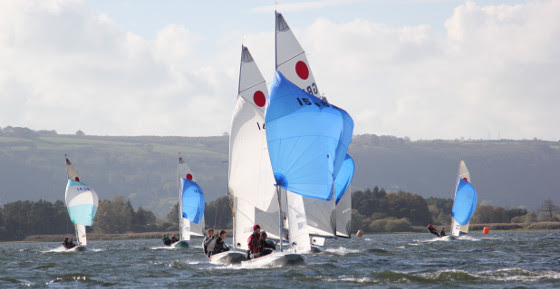 Fireball Training and Open Meeting coming up in March

At last, my prayers were answered and we had a decent forecast for last Sunday’s Class Race Day. The result was a good turnout with almost 40 boats coming to the start line; it was like Frostbite series of old! There was some confusion about the start time and the race format but we were in the capable hands of Ian Cadwallader; he planned a 4 race series with two in the morning and two in the afternoon, all windward/leewards – brilliant. So what happened?

Most encouraging of all was the colourful group of 8 Fevas in the short course fleet. The winners were Quinn and Fin with three bullets followed by Ed Lane and Alex Firmstone and, in third place, Rosie and Susan Sheehan. I have to say as I sailed around I heard many hails of ‘Protest’ from these youngsters. (This is always disconcerting as I feared they might be aimed at me – guilty conscience!). In the end no pen hit protest form paper and they were all smiles on the shore; they are very hot on the rules and I know they could give some of us veterans a lesson.

The four Flying Fifteens had a dog eat dog tussle with them all taking a turn at the front. Russ Abrahams and Jane Yates finally triumphed by winning a very close last race.

That wily fox Julian Cooke beat the other Lasers with a 3 win to count score line – his closest rival was Alex Knight who upset the order in race 3. It was good to see Chris Sunderland also in the prizes with a consistent set of 3rd places.

In the largest fleet, the Handicap, those speedy RS800 visitors gave us all a good hammering in the morning but fortunately decided to let us off after lunch and de-rigged. Both Nick Martindale and I managed to win a race but a consistent set of 2nd places saw Andy Harris take the overall win in his Europe.

As for the So-Slows, although there is a glimmer of hope that their winter hibernation may be ending, 3 on the start line cannot be called conclusive. The order throughout the day stayed unchanged – Chris Goldhawk scoring a row of firsts with Rick Knapp and young Comrie in pursuit.

All in all it was a great day’s sailing.

Over the next two weeks you may see the boat that Bristol Water is using to complete a mapping process of the bottom of the lake. I understand that this will tell them exactly how much water Bristol will have available to drink when the lake is as full as at present.

A road trailer has been stolen from beneath a launching trolley and boat.  Please ensure that the outer gate is locked at all times, the only exceptions would be if there is a planned open event. Also please remember that it is very wise to fit a locking system to any trailer left at the Club.