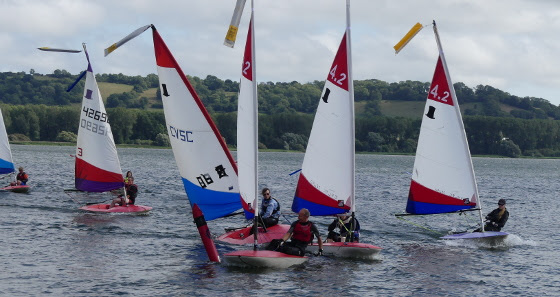 The lake water level is gradually dropping – will RIB and Committee Boat drivers please be aware of the shallow areas, no more mashed props please!

Our travelling racers continue to fly the flag for Chew

4 RS Fevas competed in the Europeans at WPNSA; well done to them all for sailing in some pretty windy conditions and congratulations to Rosie and Susie Sheahan for their podium spot as 3rd Juniors. The event was part of the massive RS Games, also competing were John Warburton, 9th in the Aero 7 Worlds, Steve Jones 8th in RS100 Nationals and Steve and Barney Thomas in the massive RS200 fleet.

Well done too to John Rose, 4th in the Scorpion Nationals, sailing with his father, Peter.

There are the ones I know about ….There will be other tales to tell of races and cruising exploits- let us know.

At home the lake has been pretty busy despite being the August holiday season with many members enjoying a gentle cruise on Wednesdays, Saturdays and Sundays.

Wednesday Evening Series. The main Wednesday evening series came to an end with a lovely sail once the wind settled. An incredible 156 different boats took part at some stage or the other, and 48 of them qualified for a place in the series (the majority by far came from our fantastic Laser fleet…).

Nick Martindale and Ruth Kenyon won the fast handicap fleet in an RS200, despite the late surge from Andy Bones who won his last 5 races. If only you’d got going sooner, Andy!

The massive Laser fleet was bossed by Julian Cooke, winning by 20 points from Pete Sherwin and Phil Patullo.

The slow handicap produced the closest finish, with Tim Johnson winning by 2 points from Chris Goldhawk, both sailing Solos.

There were over 30 boats on the water for Wind down Wednesday 1. Thanks to Helen and Cathy for manning the Race Hut – more volunteers will be needed for…. the last ‘wind-down’ Wednesday on the 29th with the early start at 6.15pm.

Admirals Chase Handicap series – 60 different boats sailed at least one race in this series. There were 10 qualifiers and the rather fine trophy will be collected by Chris Goldhawk at the prize-giving, sailing a Solo. In second place was Steve Jones in an RS100, and in third it was Craig Harris in his Solo.

Summer Points series – the A Handicap fleet was won by Cathy Bartram in her Aero 7. Andy Bones and Lynne Adams won the F/Fifteen fleet, Andy Southall won the Lasers, Chris Goldhawk won the Solos and Paul and Gabby Nichols won the Short Course fleet in their Mirror.

Family Fun Day and Topper Team racing – The forecast for a typical gusty westerly 20-30 knots inevitably took its toll on attendance but the club was busy and there were lots of smiley faces and much laughter. Josh Preater expertly compered the “star in a reasonably priced car” (all ages, in an Optibat, timed out to a buoy and back). Hugh Whatley’s on the water word search was popular but the increasing wind led to a quick retrieval of clues to be laid out on land under very stylish orange buckets masquerading as racing marks!

In the afternoon 4 teams were eventually and expertly herded / shepherded by Keith and Claire through a team racing series in 4.2 and reefed club toppers. A short course right in front of the clubhouse was as much fun for the spectators as the competitors – capsizes, falling out (of the boat, not with each other!), tight manoeuvring was all observed by judge Andy Bones (so much for those knockers who thought Flying Fifteen sailors don’t know any rules….!). There followed an all-in race with said judge bravely leading from the back – he was sometimes seen actually in the boat. Finally, a few final enthusiasts charged around after small bags of Maltesers and the model boats were tested in the lake.

There were some winners and prizes, although the chocolate, mistakenly left all day in the car by the Commodore, was deemed unsuitable due to its consistency.

Thanks to everyone who took part and helped; a different and very jolly day which hopefully was sufficiently well received to feature again in next year’s calendar.

Remember it is the Junior August Antics this Bank Holiday weekend. There will be general sailing allowed but no racing.

Thursday 30-Aug-18 – the last Fun Thursday (the Thursday 13-Sep-18 has been cancelled)
Our noble Police Group are providing safety cover from 14.00 for you to enjoy the lake, and arrange some informal racing for anyone interested at around 6pm.

Mercury Macklin & Melvin Watts Trophies and Anniversary Cup – Sunday 02-Sep-18
An all-in Handicap race in the morning will determine the winners of the various age categories, each of which has a trophy, (some big, some small!), and the Melvin and Watts trophies for those under 17 years in either single handers or crewed boats.

The Anniversary Cup is being sailed for the 51st time! This is a pursuit race starting not before 13.30 to commemorate the foundation of the Club.

The course combines the RYA ‘Start Sailing’ and ‘Basic Skills’ syllabi to get newcomers to sailing safely out onto the water, and will be delivered by our in house instructors.

It is open for bookings now via WebCollect and is filling up fast. As we lost one of the club Visions recently to hull failure the course can currently accommodate 8 students. However, we are seeking to secure a replacement for the Vision and if we can do that in the next week or so the capacity will be increased to 10.

Barts Bash is the worlds’ largest sailing event. For the fifth time, Chew Valley Lake Sailing Club will be taking part in the Bart’s Bash global race. We will be raising money for All Aboard, a Bristol charity providing watersports to a wider community including people with physical, emotional or cognitive disabilities who would otherwise, for whatever reason, feel that there were barriers to their participation. Save the date for Sunday 16 September and let’s have everyone on the water as this year we hope to be contributing to another Guinness World Record attempt. The race is set up to accommodate all abilities and interests and is great fun too. If you have never been involved before then this is your chance and, with the possibility of contributing to the world record, you might be making history as well. Not bad for a Sunday sail! I would welcome help on the committee boat if you are available and will need volunteers for the day and so if you would like to be involved without going on the water then please let Rob Mitchell know: reachingrob@me.com, or 07973 619114