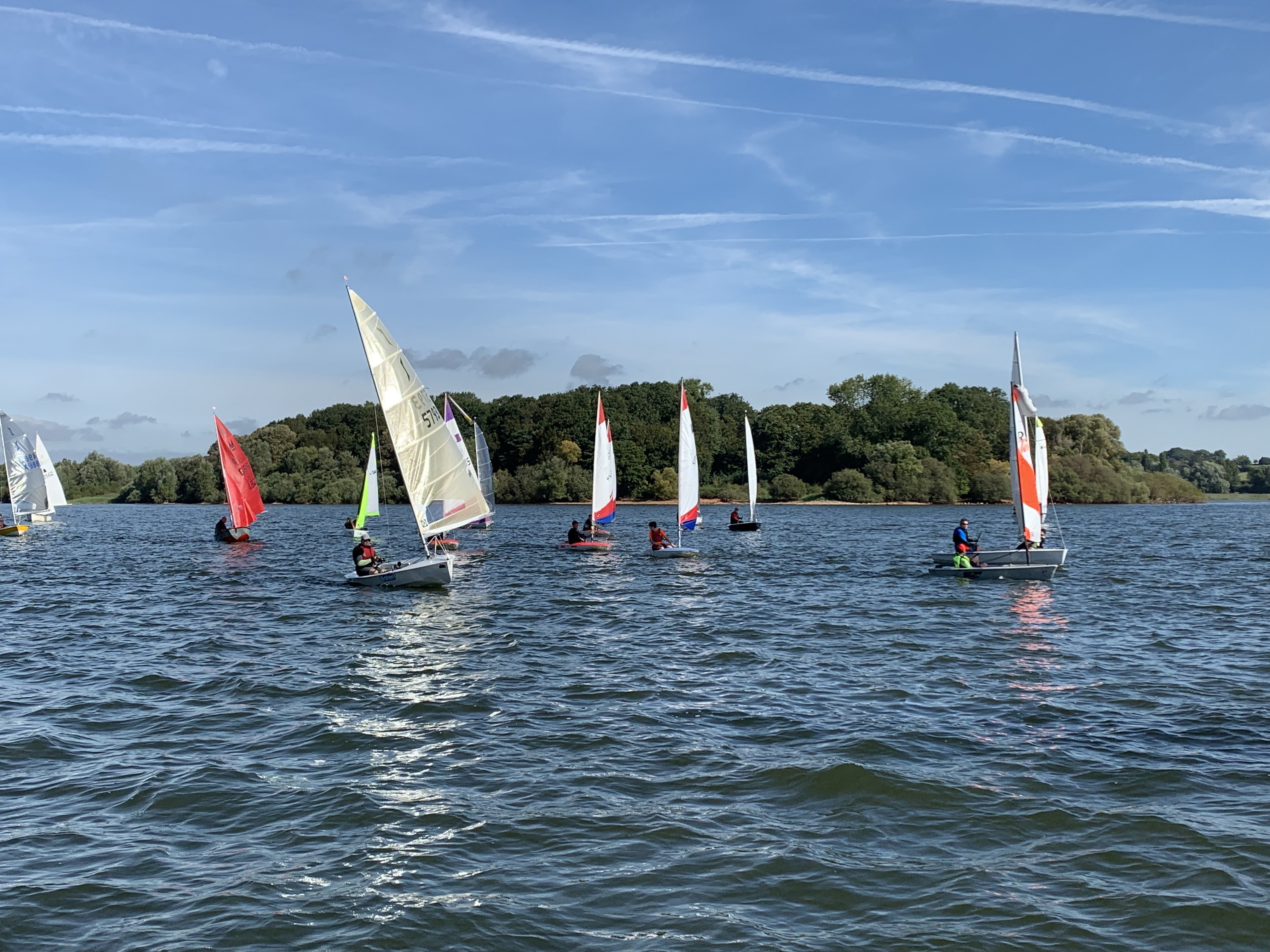 As we enjoy this week of ‘Indian Summer’, I can’t help thinking a bit of rain might be good, not only for my garden, but to make the long haul up the slipways a bit easier! (I fully expect to be blamed when the deluge starts on Sunday!). It goes without saying you need to beware of Little Denny, which is not very far below the surface, whether you are in your galleon or one of our precious powerboats.

That was one of the best Barts Bashes since this annual race began 4 years ago. The sun shone and there was a gentle breeze from the South West, with the occasional hiking gust.
Rob Mitchell, once again our Race Officer for the day, showed that he has indeed made this event his own. The briefing was certainly not brief! However, what it may have lacked in brevity, it made up for in entertainment value….we really should have videoed the whole thing. 58 boats took to the water, dodging out between hoardes of fishing boats because the date had clashed with one of the big fishing events of the year. With all needing handicap times, we might have expected a prize-giving under floodlights but no – Just after 2, Rob entertained us again as he gave out the prizes, including for some entirely random sailors that had taken his eye during the race. As each Bash comes and goes, I feel guilty that Rob has been nominated once again to be the Race Officer. Sadly, Rob, I fear you have become irreplaceable and that prize barometer may well never carry the Mitchell name!
For most of us the race itself took just over an hour. Actually well over an hour for Paul and Gabs Nicholls in their Mirror, finishing in a very creditable 13th place on handicap. We enjoyed the sight of Paul Croot and Tom Hole in the 49er; they were the first boat to finish, but needed to whizz round in 15 minutes less to trouble the leaders!
Tim Johnson was first in his D1, 20 seconds ahead of Andy Bones and Lynne Adams in a Flying Fifteen. Julian Cooke in a Laser was third, 10 seconds ahead of John Warburton in his Aero 9.
I took advantage of the crowd to present young Noah Curtis with the shiny Junior Challenge Cup which was sailed for over a number of summer Sunday afternoons.

Amazingly Rob also found time to take a whole gallery of pictures during the race, some of which surround this news – follow this link to see the whole collection –
https://www.flickr.com/photos/cvlsc/albums/72157710856117478

The plans are drawn up and a huge team of helpers organised to make this annual junior event happen. It will one of the selection events for junior sailors hoping to gain places in RYA training squads for the winter.
If anyone would like more information about this, contact Nick Edmonds at youth@chewvalleysailing.org.uk or edmonds_nick@hotmail.com

Race Officer, Chris Goldhawk, will be in charge and, weather permitting, there should be no restriction on people wanting to simply have a sail. In any event, it promises to be a great spectacle so do come along and watch.

Meet in the bar at 1:45 rigged & ready. Ladies, whatever your standard of sailing, you are warmly invited to join in; it is all about the camaraderie and fun and, if you would like to team up with a more experienced sailor on the day, this can be arranged. This is the last lake n’ cake this year (although I’m sure the ladies will find a reason to keep going out in a group over the winter). If you would like to be added to the lake & cake email contact list and WhatsApp group please contact Rosie on rosie.bowers@btinternet.com

This is the last Sunday of both of these racing series.
An incredible 79 boats have taken part at some point in the Admirals Chase series. As I write Julian Cooke holds a slender 1 point lead over the sprightly Nick Martindale in his Solo. Too close to call I’m afraid to get a name put on the trophy yet!
Nick has all but won the Solo fleet in the Summer points. Austin Milner holds an unassailable lead in the Lasers, and likewise Tim Johnson in the Handicap fleet. The Flying Fifteens are desperately close though with Bill Chard holding a half point lead over Russ Abrahams.

Note the early start at 10.30!
The plan is for two races in the morning and two in the afternoon, in the usual club fleets, as we count down to the clocks changing. Prizes are awarded at the end.

Volunteers to help with this event will be very gratefully received by the organiser, our Solo fleet captain, Errol Edwards – erroledwards60@gmail.com
Being a part of the team running these exciting events is a great way to better understand what goes on. No-one gets placed outside their comfort zone – the Race Officers (Rob Mitchell in this case – again! – sorry Rob), go to great lengths to explain everything so that all involved pull together. 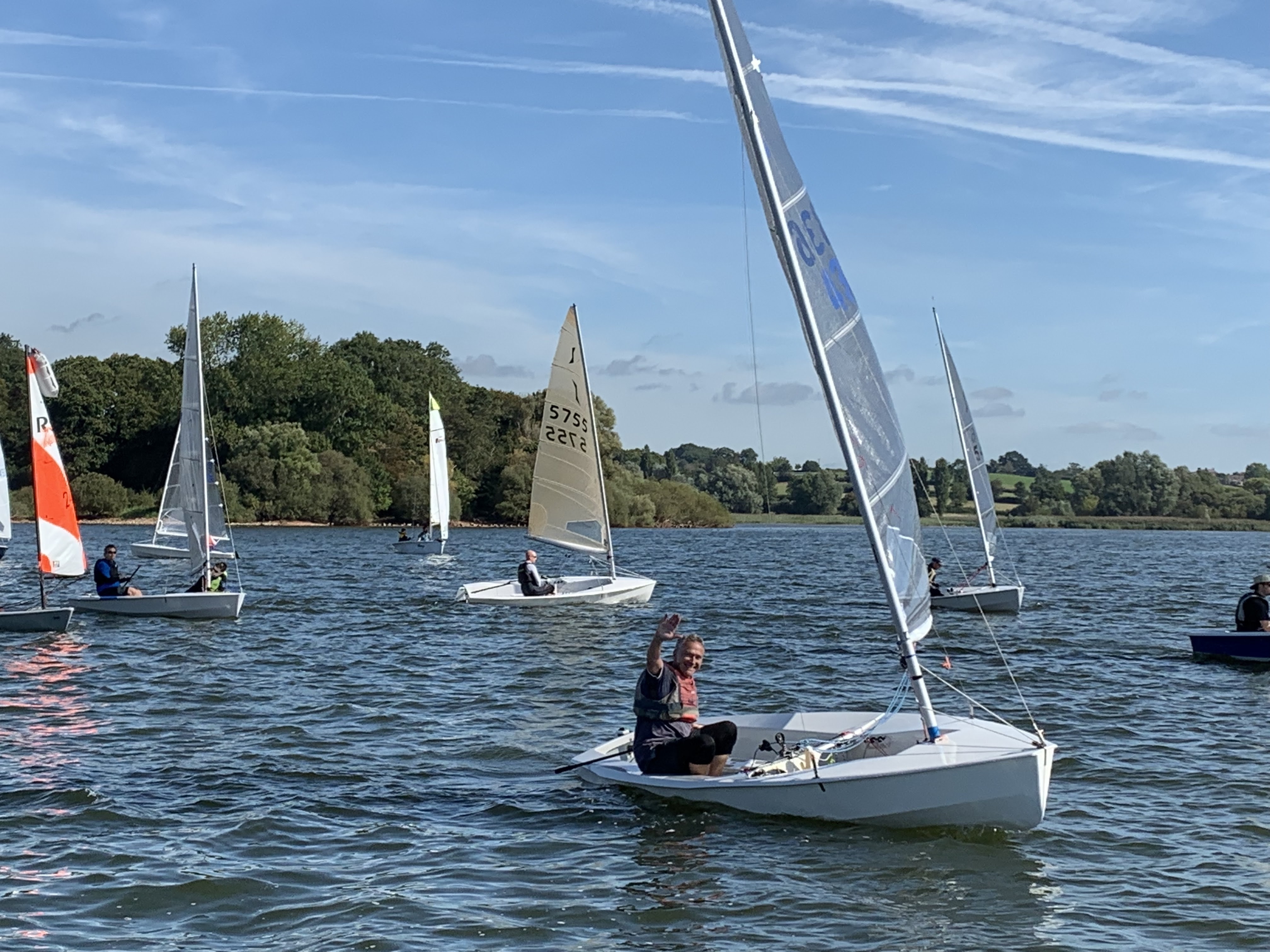 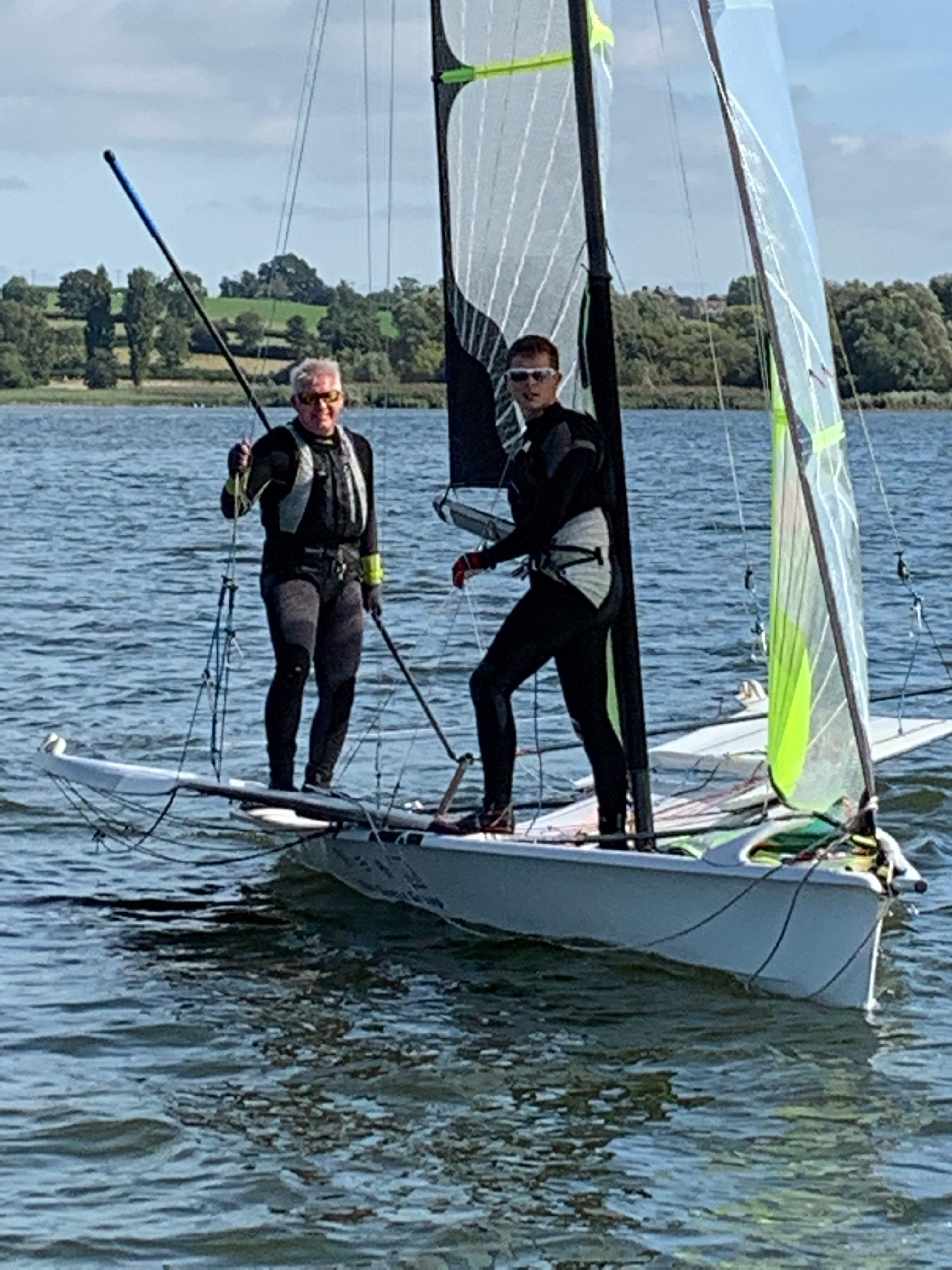 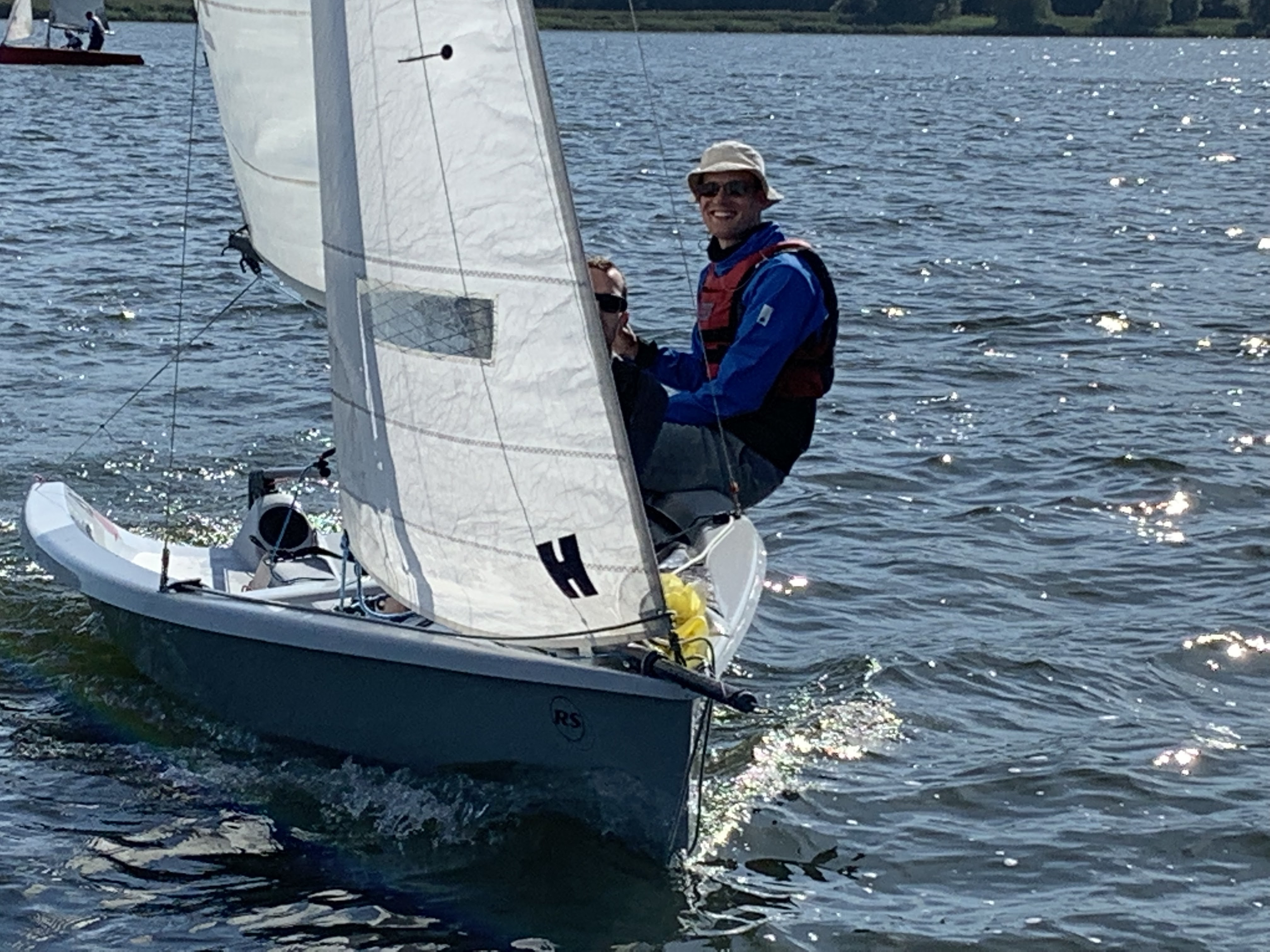 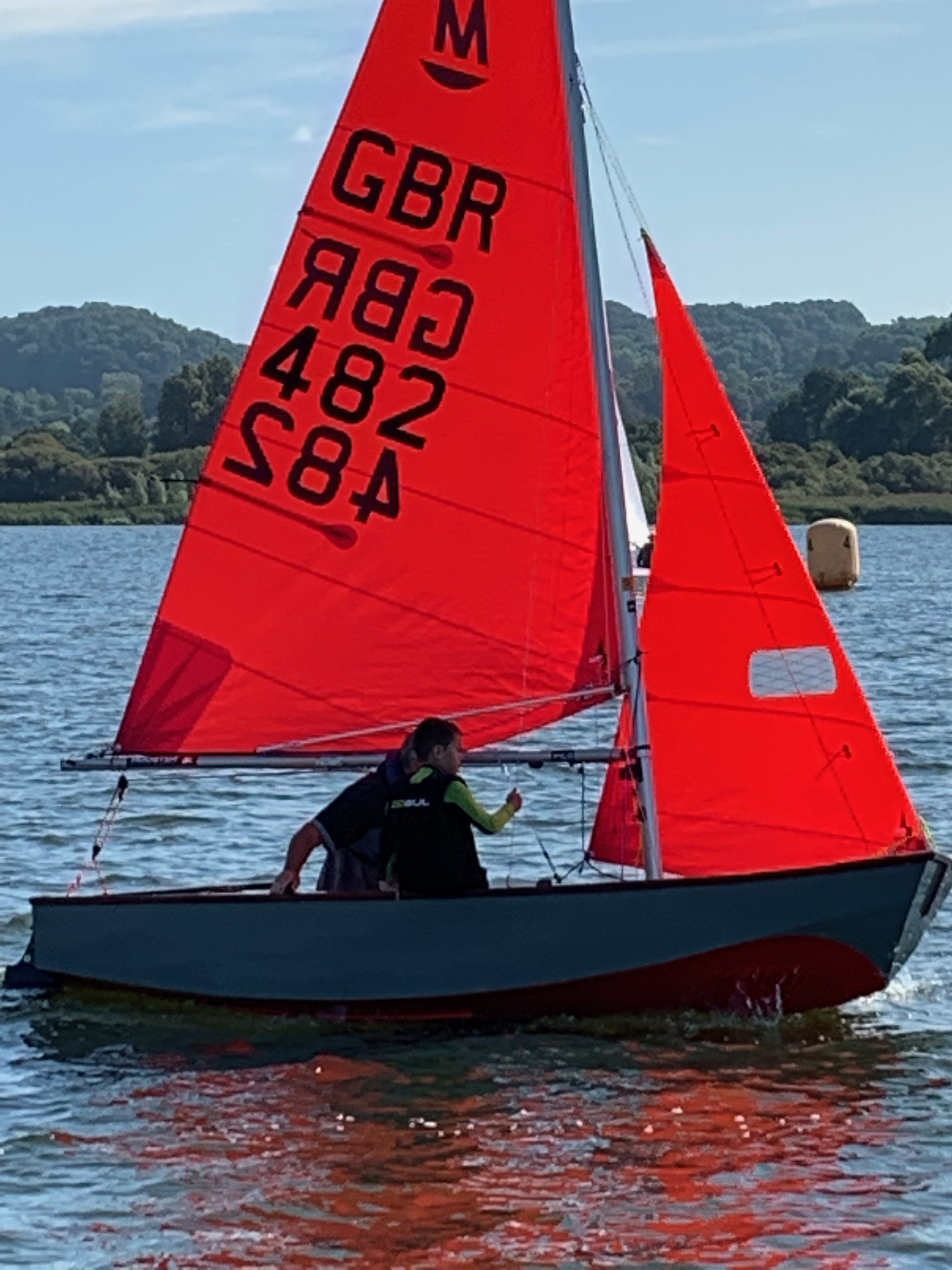 Paul and Gabs in their Mirror 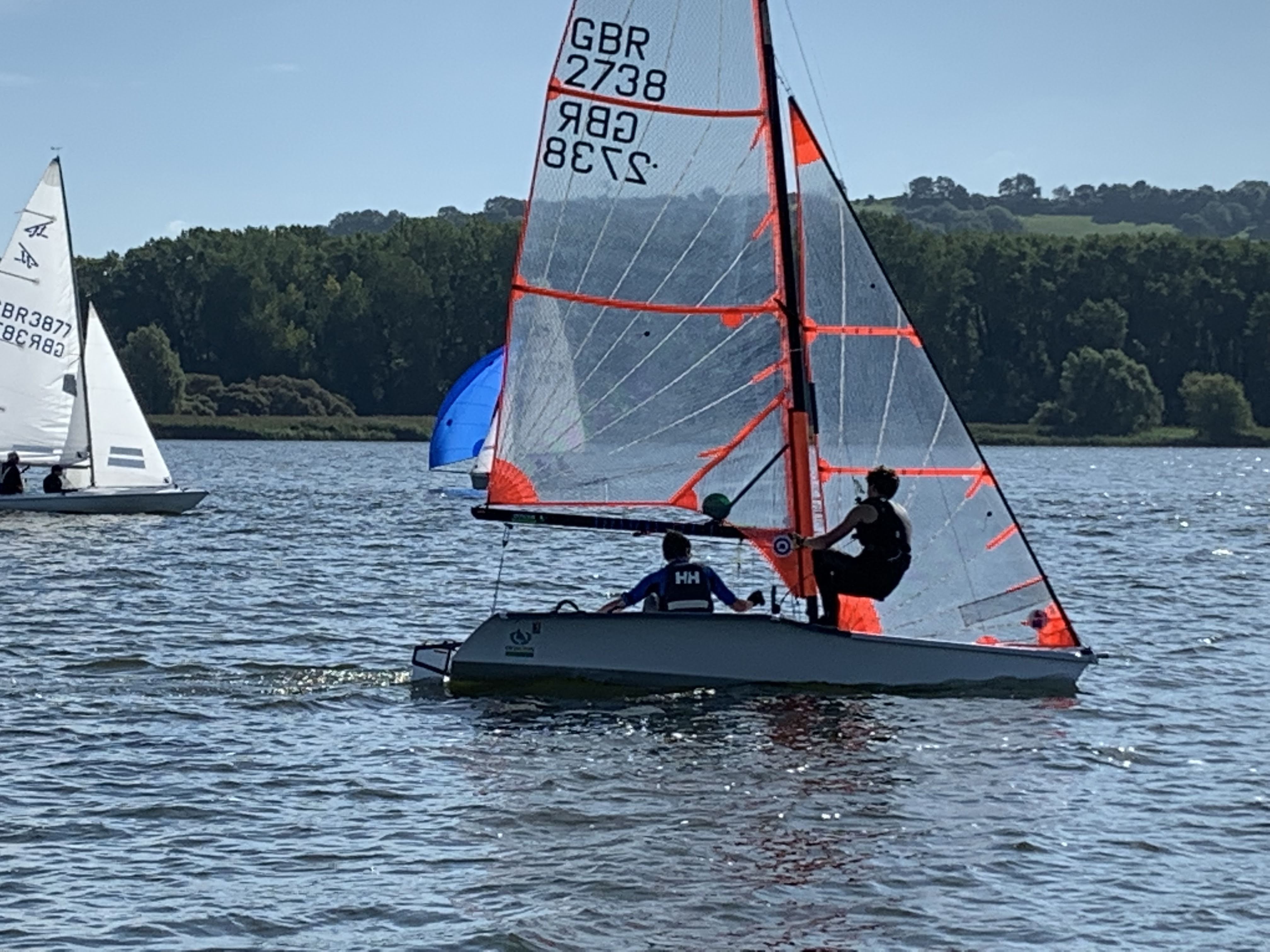 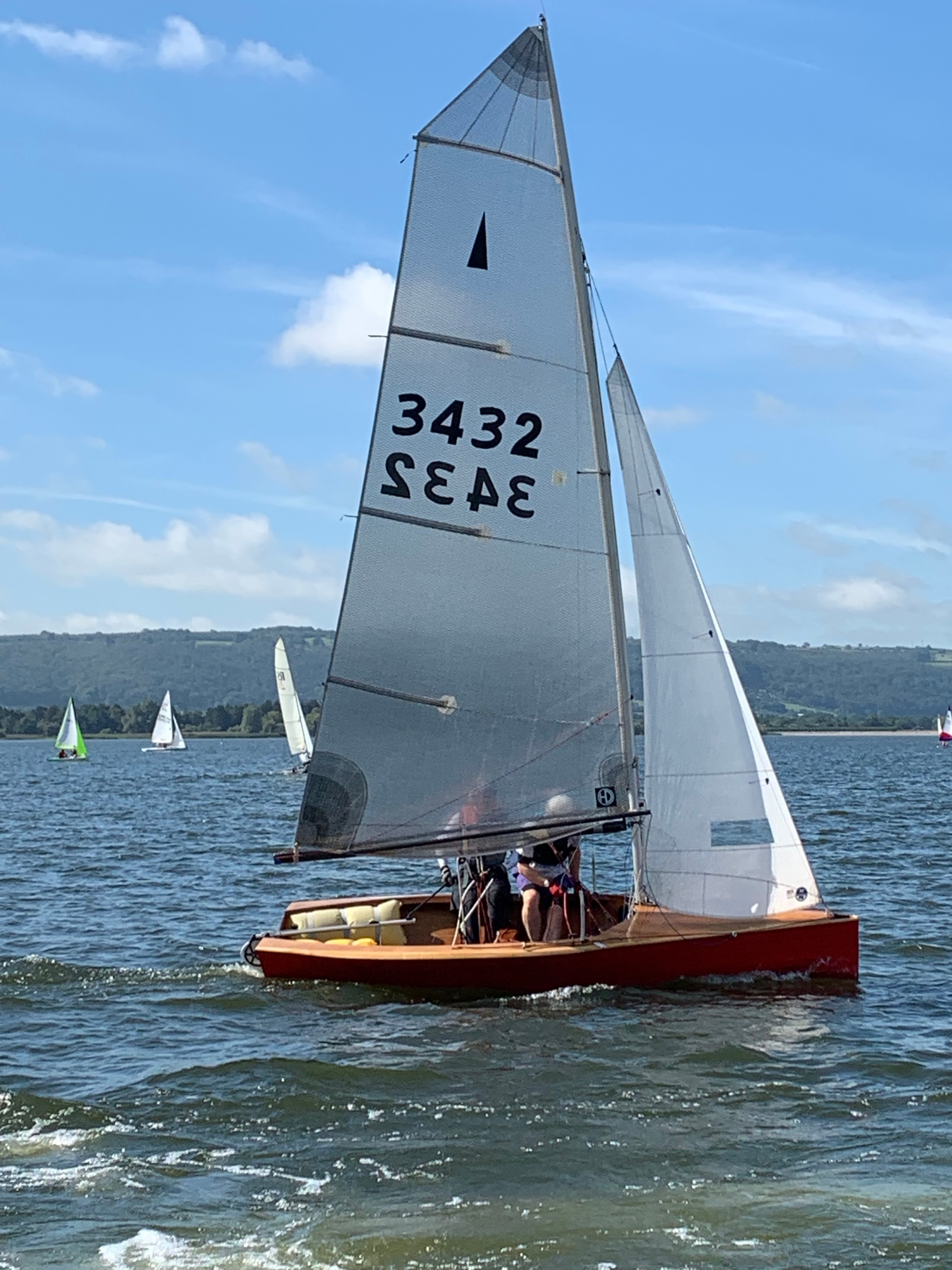 Finally a report of a sailing summer from Jeremy Iles

Watching a young couple out in 2 club Toppers the other day, it made me realise that Clare and I have been members at Chew for 25 years: we had some sailing experience before, but started just like them, by borrowing club Toppers.

How things have changed: my main sailing this year has been on big boats. I volunteer as a Watch Officer for the Rona Sailing Project based on the Hamble: they have three ocean going yachts, and this year I went to Cherbourg and back on Donald Searle, an Ocean 75, celebrating its 40th year. We had a very mixed crew of young people from Shooters Hill in London.

A couple of weeks later I joined friends and their 2 young children on their Maxi 40 in Falmouth (also 40 years old). We sailed out past Wolf Rock and on to, and around the beautiful Scillies for a few days. Fortunately, the weather was good, and the passage was smooth. They are starting on a round-the-world trip next year and were sailing to Spain to over-winter the boat. I hope to be invited on some of that voyage, where, no doubt I’ll be the honorary grandparent!

And then I skippered a 35ft Moody for 5 days in and around the Isle of Wight: our younger son Rowan was Mate: Clare and two friends came along. For some of you this might sound simple – or beyond comprehension – depending on your experience, but getting the time and tides right to sail around the south of the IoW is tricky – I’m pleased to say we managed perfectly even arriving in Bembridge just 5 minutes behind my ETA. Berthing in marinas is always nerve racking, and at the end of July often requires rafting up against other boats: sometimes the neighbours are delightful, sometimes surly. But eventually even the grumpiest of them offered helpful advice on a controlled departure from a confined space. Always something to learn.

Back to dinghy sailing: we did our annual River Dart camping trip, launching our now venerable Wanderer from its home at Dittisham, and sailing up stream to camp at Ashprington Point along with my brothers’ family in their canoes. Arriving under sail at The Maltsters Arms at Tuckenhay is always a highlight. We did however, loose our outboard engine due to the failure of the supporting bracket. Maintenance needed!

And at Chew: Clare has been energised by Lake and Cake and has bought a better Laser: she bought me one too and I’m now gingerly getting used to it, and to the alien concept of, what’s it called, racing! Despite all my certificates and experience I am simply not cut out to be competitive, so I’ll be at the rear of the fleet, that’s if I don’t capsize on the start line again….

Many thanks for this, Jeremy!

The opportunities to dip your un-wet-suited toes in the lake, which is currently like a warm bath (!), are getting fewer; make the very most of them, 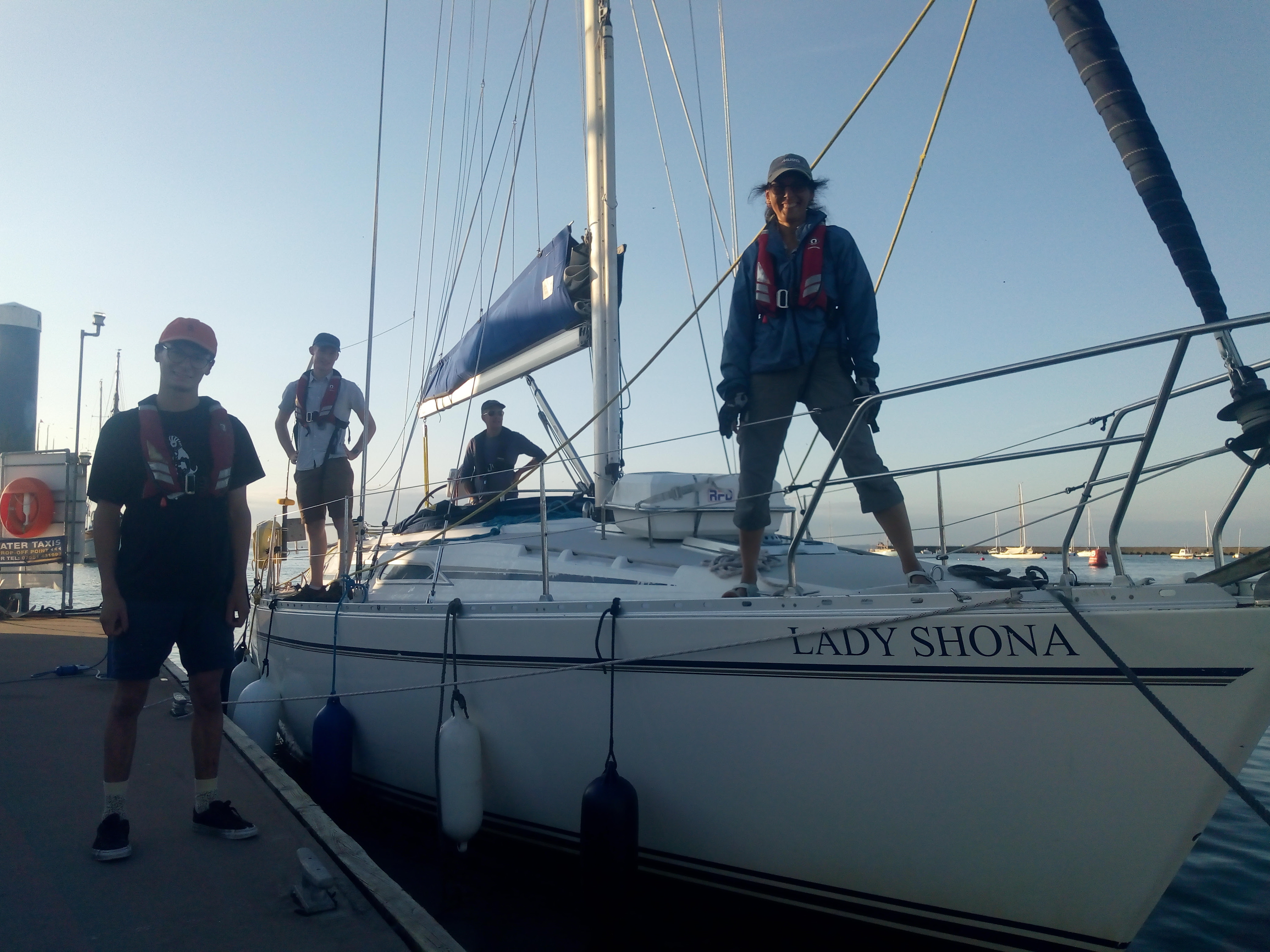