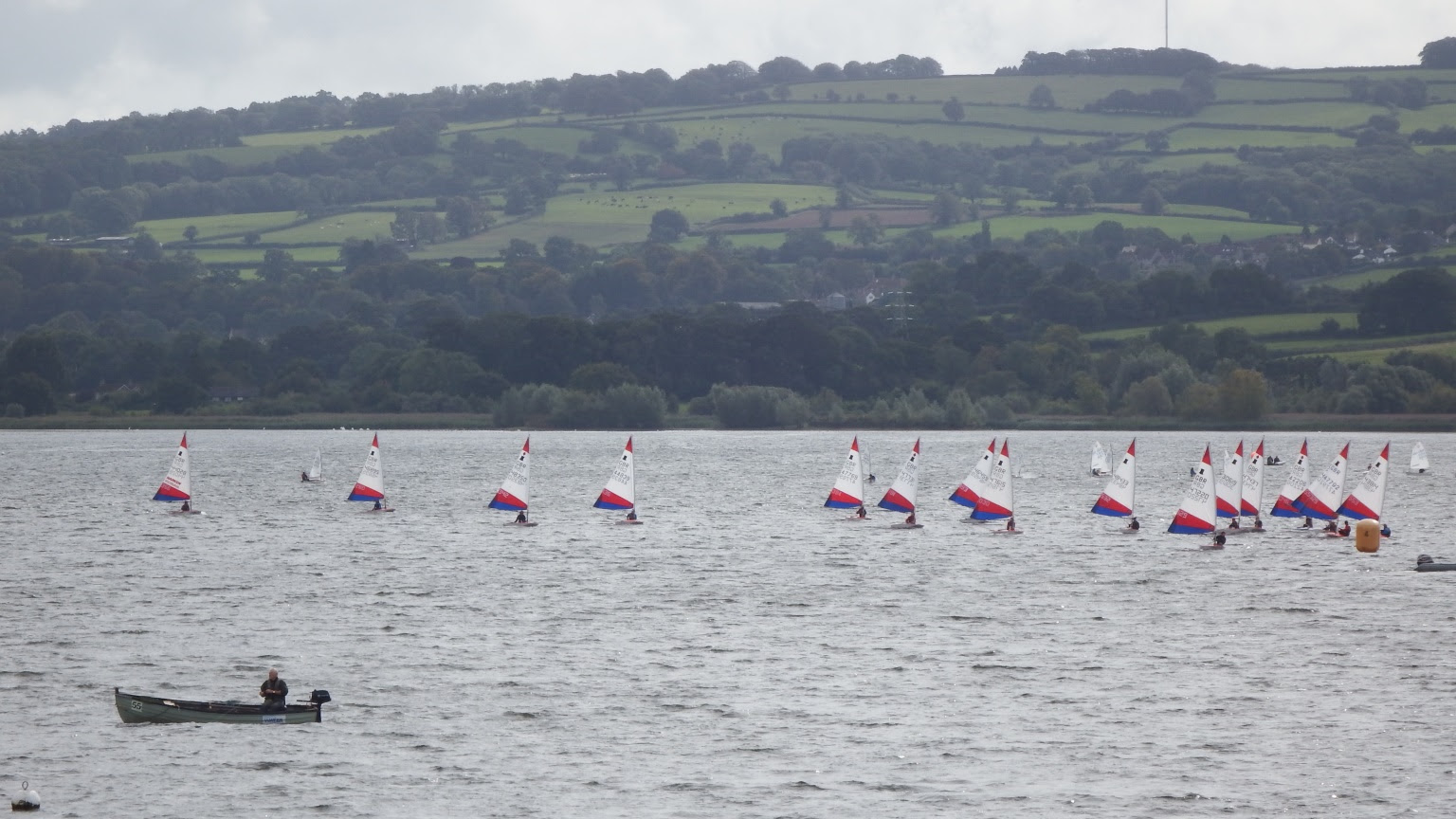 Toppers with a couple of Optimists chasing them!

The Topper and Optimist Open on 22-Sep-19 lived up to its billing. A large team of members, some on rostered duty, but many ‘volunteers’, enjoyed watching the 27 Toppers and 15 Optimists complete the four races.
The day started wet and largely windless, but the predicted breeze soon started to show, firstly from the East but, happily for Chris Goldhawk’s race team, swinging to the South before the first race got going. The sailors ranged from the under 10’s to the 14’s and 15’s. They tend to chatter lots on the water (!), but don’t be fooled – their racing is deadly serious. In fact we had to deal with two protests at the end rather like TV courtroom dramas!
The Topper fleet was won by Oliver Hale from Poole with a single point advantage from Ali Holborn from Paignton. (In fact he was the only competitor in either fleet to count two first places, so close was the racing). In 3rd place, and none the worse for his DSQ at the hands of the protest committee in race 4, was Mark Ripley from Paignton. Chew’s best performer was Dru Townsend in 4th place.
The Optimists’ results saw a tie on points at the top with Katy Jenkins from Bowmoor beating Amelie Hiscocks from WPNSA after the tie-break. Archie Munro-Price from Castle Cove was the first boy in 3rd place.
At the end there were lots of happy, smiling faces, even amongst the duty team! Force 4 chandlery were thanked for their generous support adding two amazing kit bags to the goodies that were handed out.

The pictures are thanks to Andy Curtis – (Noah’s Dad!) and Steve Smith.

This all-in handicap series which has seen an incredible 86 different boats compete over the summer, came to a climax on Sunday. In a brisk, gusty southwesterly, Paul and Harry Smalley won in their Mirror followed by Andy Jones in his RS100 and a tied third place between John Warburton in an Aero7 and Steve Jones in another RS100. With Race 6 being lost, this left Paul and Peter (the smallest Smalley) the overall winners; one point behind was Julian Cooke in a Laser and a further point back was Nick Martindale in his Solo. How close was that?!

This series also finished on Sunday. Again a huge number of boats put in an appearance at some stage in the series, but this time the winners ‘won’ by a furlong or two!
Flying Fifteens – Russ Abrahams and Jane Yates
Handicap – Tim Johnson in a D1
Lasers – Austen Miller
Solos – Damian Gardner

Where have our racers been this summer?

From dinghy park gossip and trawling the internet, I have tried to keep up!
Derian and Andy Scott seem to have been the farthest travelled – 7th out of 42 at the Fireball Worlds in Quebec, Canada is pretty amazing.
Pete Sherwin finished 2nd Great Grand Master at the `Laser Masters Worlds in the Netherlands.
Paul Smalley retained his K1 National Champion title against 21 others at a very windy and weedy Draycote.
Dave Smart came 3rd out of 19 at the RS100 Nationals in Porthpean.
Ed Presley came 13th out of 45 at a seriously windy Contender Nationals at Broadstairs.
Paul and Gabs Nichols finished 18th at the Mirror Nationals in Poole.
Paul and Peter / Harry Smalley won Abersoch Mirror week against a fleet of 60 others (including me!). Bizarrely this week clashed with the Nationals at Poole – crazy Class Association.
If I have missed you out, please let me know for the next edition….

Tom will be rostering the duties for January and February 2020 very soon, so if anyone is planning to volunteer for duties in that period, please do so without delay.

Note the early start at 10.30!
The plan is for two races in the morning and two in the afternoon, in the usual club fleets, as we count down to the clocks changing. Prizes are awarded at the end.

This could be a busy weekend for the Club as we are hoping to host up to 60 of these lovely, but very different types of boat; as always the numbers coming is very dependant on the weather forecast – fingers crossed! Come along and watch what promises to be some exciting racing.
General sailing will be able to carry on in the parts of the lake where the open meeting ‘isn’t’, again depending on the weather and availability of safety cover. The first race on Saturday does not start until 1pm so there will be the whole lake available up to that time.

As we wrap up the Chew junior and youth summer program with a busy September including the last of the Chew Crew and Junior Race Days, Barts Bash, and the Topper & Optimist Open Meeting there are a few final items to cover.
This has been Mike Kew’s last year of Chew Crew. Mike has run Chew Crew, the RYA Stage 1 & 2 course, and the Assistant Dinghy Instructor training for the last 3 or so years – and has probably spent upwards of 100 days at the club! So on behalf of everyone involved with the junior and youth program I’d like to say a massive thank you to Mike for his dedication, his time, his passion for teaching sailing and his focus on ensuring everyone has a good time. The good news is we won’t be completely losing Mike – he’ll be sticking around and has already volunteered to help run the Stage 1 & 2 group next year.
With Mike stepping down from his Chew Crew organiser and instructor role we are in need of some parent volunteers to run, in particular, Chew Crew for next year. It’s a big job and I think would benefit from splitting, perhaps in to group or person taking responsibility for booking and sign up via webcollect, and organising the rota for the Senior Instructors, Dinghy Instructors, and Assistants. And perhaps another individual or group organising what happens on the water, the make up of the groups, and what is going to be covered each week. With that in mind if you’re an SI, DI, ADI, experienced sailor, are well organised, keen to get wet, or just keen to support the junior sailing program (hopefully I got most of you in that list!) and would like to help out, please can you contact me. It might seem a long way off, but the planning for our summer 2020 sessions needs to start in the next month or so with agreeing the calendar for 2020-21! We need everyone to play a part in making these sessions a success, without volunteers the sessions can’t run.

For those with keen sailors looking to keep going through the next 6 months there are plenty of up coming sessions. Dates and coaches are just being finalised. For the latest published sessions and to sign up use webcollect. https://webcollect.org.uk/cvlsc/category/training_youth-1 – note that you’ll need to login to see the club only sessions. The latest news and calendar for junior and youth sailing is https://www.chewvalleysailing.org.uk/youth/youth-news-calendar/ which may well have updates and dates that are not yet live in webcollect. Topper and Feva sessions are great starting points for Chew Crew Intermediate sailors and above – requirement is to be able to sail a triangular course. Although billed as race training – on average about 80% of these sessions focus on improving boat handling.

And finally, the various session organisers are editing their contact lists. So if you’d like to find out what’s planned for a specific group over the next 6 months and/or to ensure you are on their contact lists here’s the current list of contacts. Also note we have an exiting new sports/keelboat group aimed at those +14 years looking to race keelboats – contact Dan if you’re interested, and we’ll be sharing more about this exciting addition in the coming months.

Thanks everyone for a great summer, and look forward to hearing back from you on feedback, volunteering and your plans for the next 6 months.

I would like to echo Nick’s thanks to Mike Kew for all his efforts during his years in charge. There is a real need for volunteers to help run our Junior and Youth programmes – please don’t be bashful about coming forward!

The wind is howling as I put this news together – maybe time to dig that old drysuit out of the cupboard for another year! 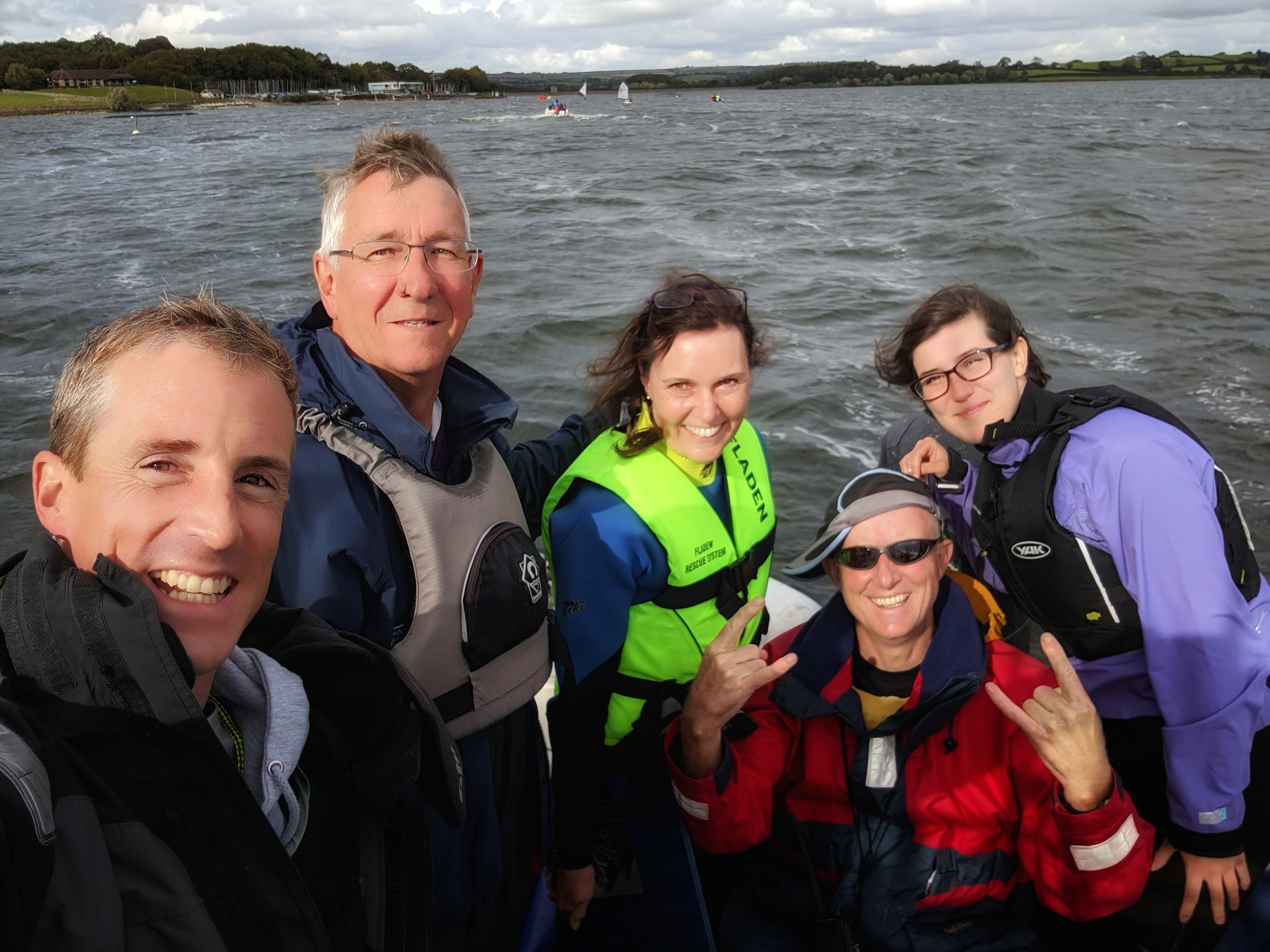 A happy race team – our leader on the deck! 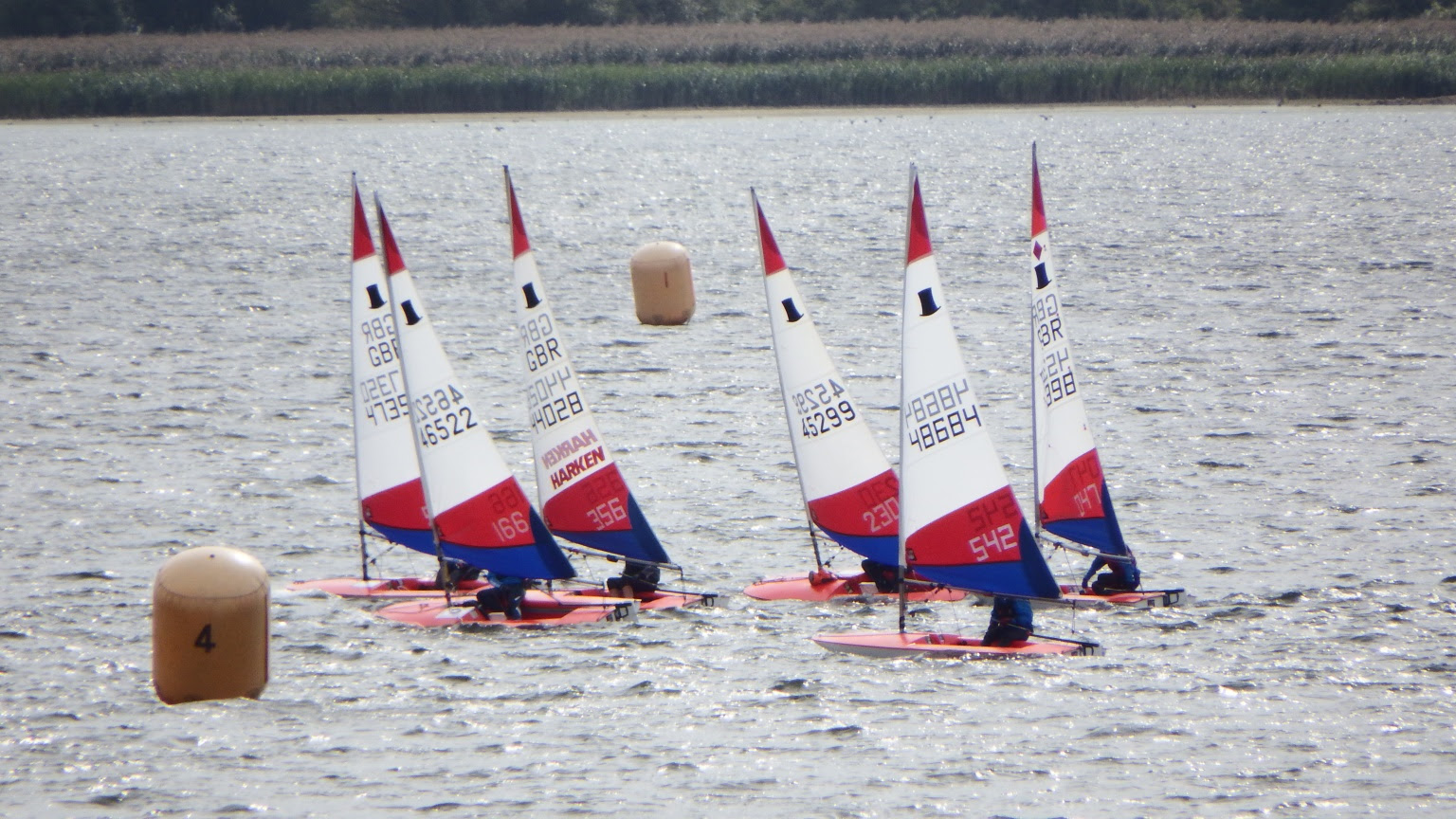 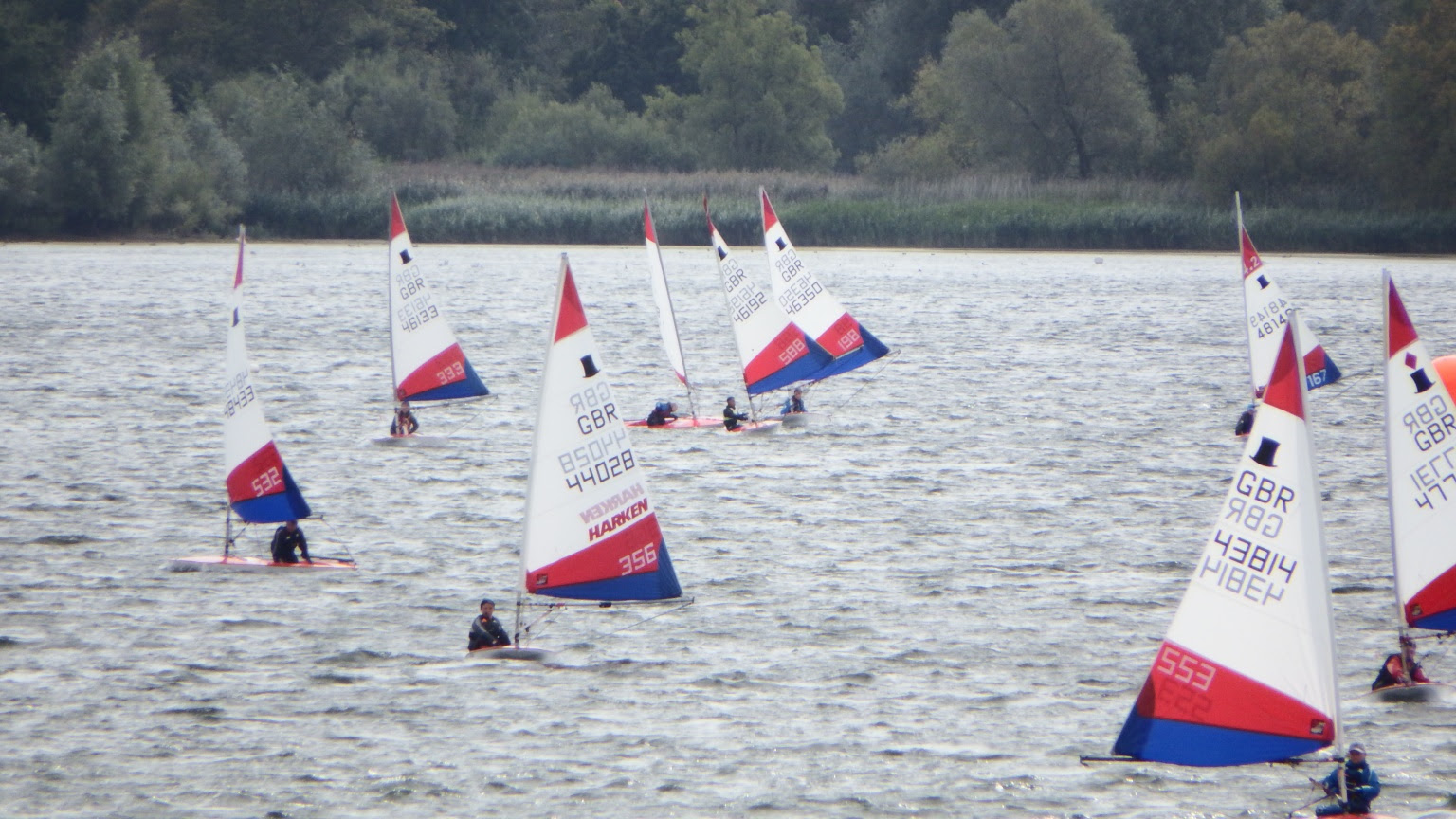 Noah Curtis in the Harken Boat 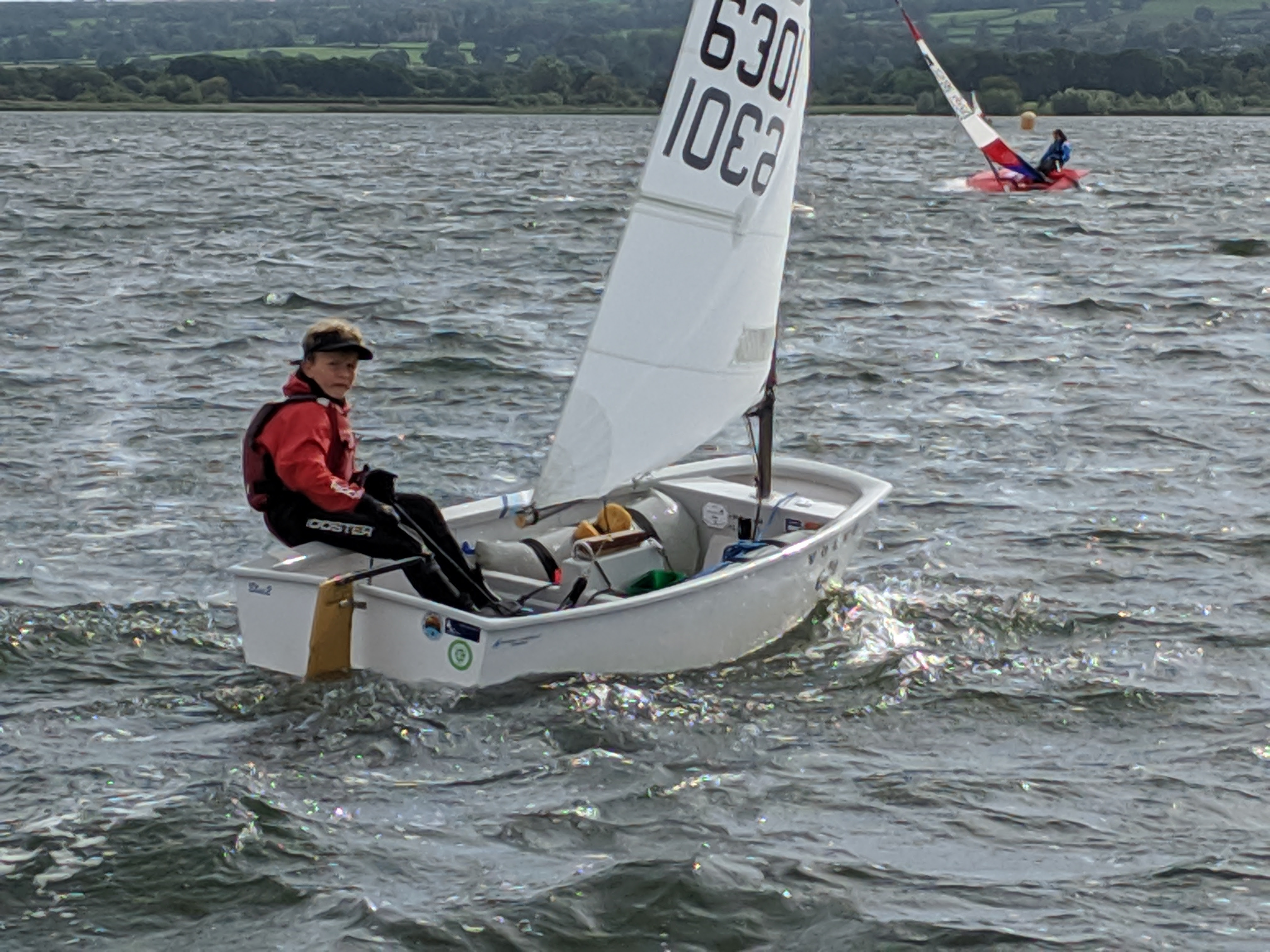 Yes, there were Optimists! 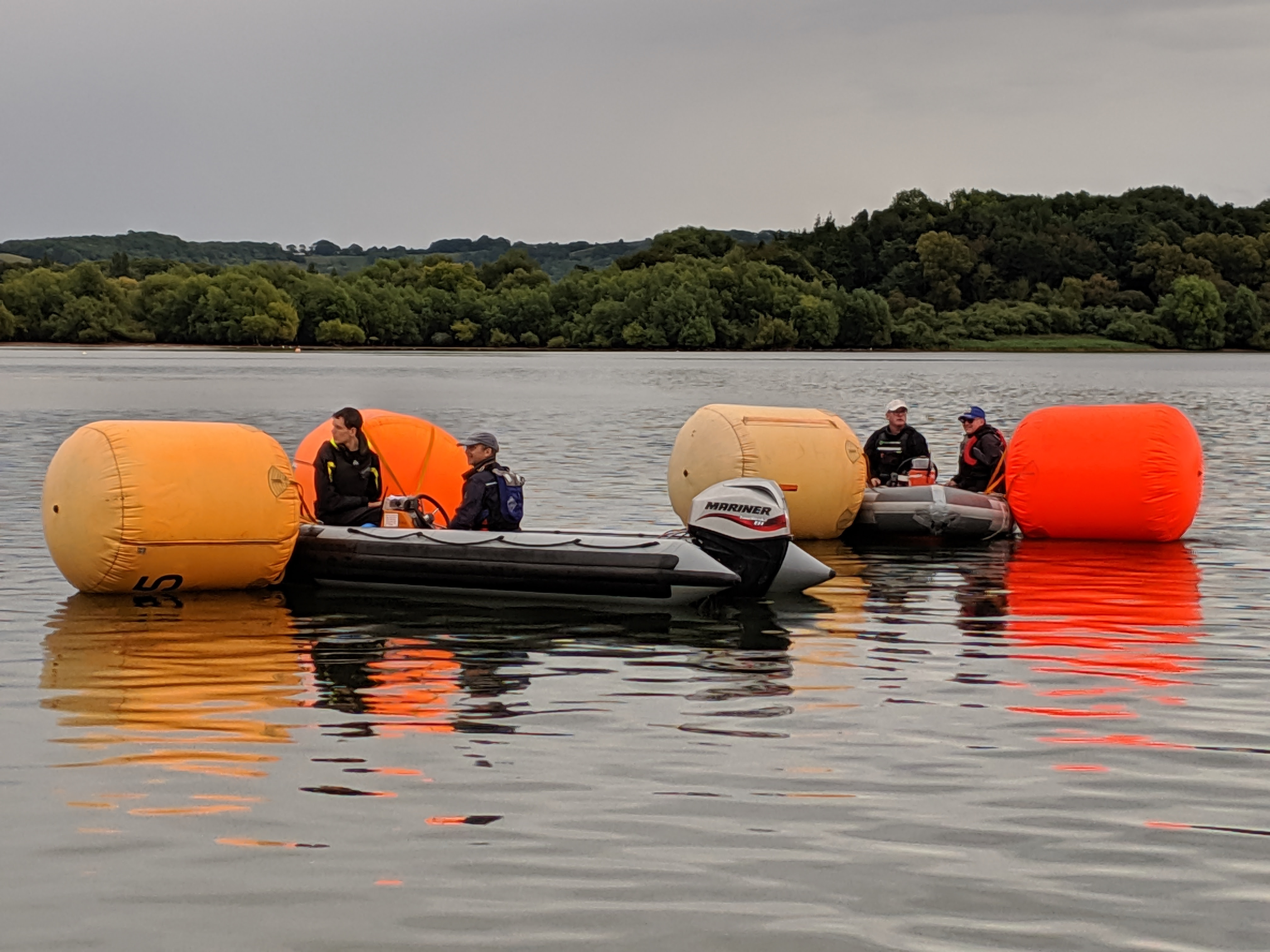 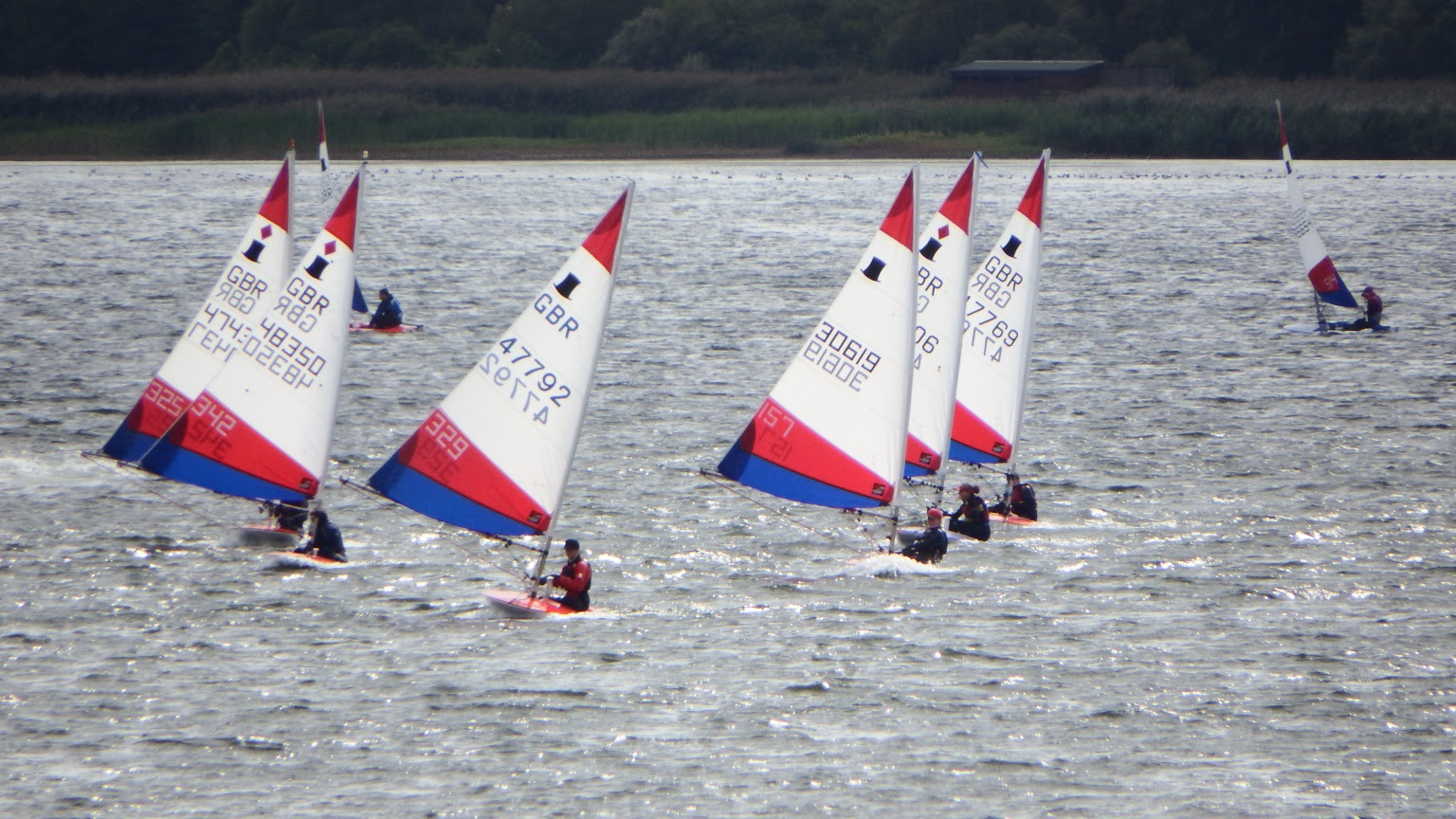 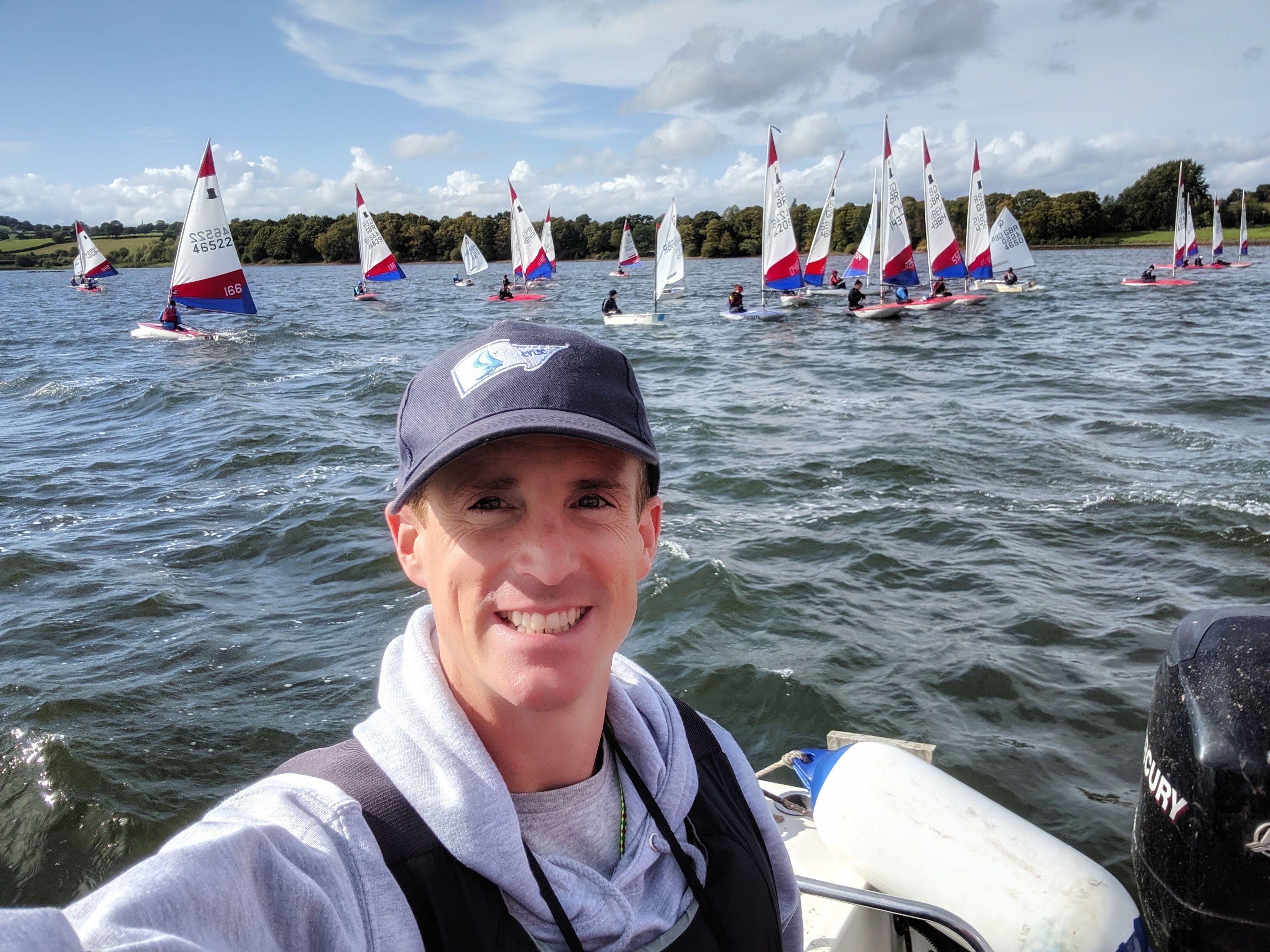 A young sailor we rescued! 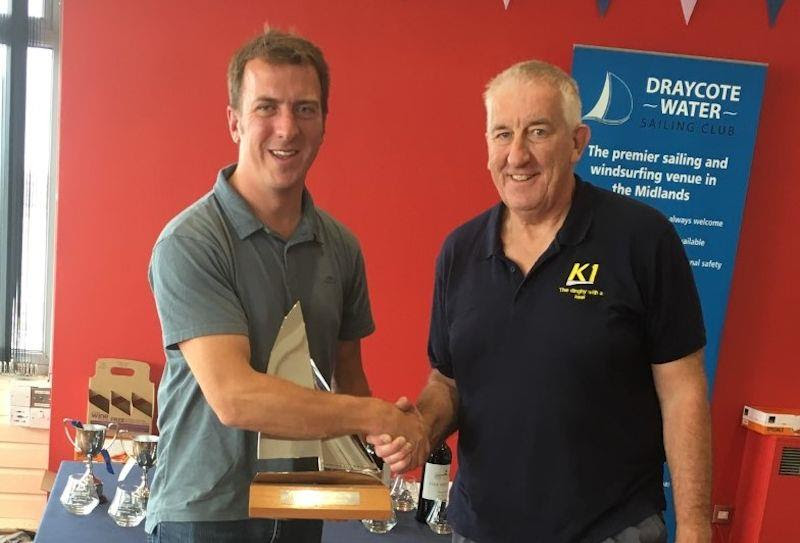