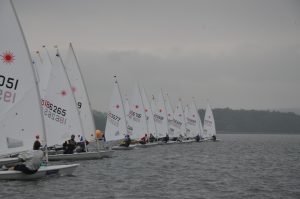 36 Laser competitors arrived in the Chew Valley on a rather drizzly morning. Fresh winds had been previously forecast, but the day was to offer light airs that would gently ease and veer throughout the day. 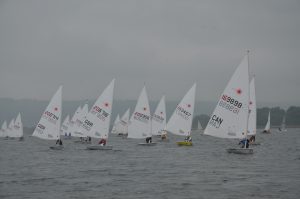 The drizzle dutifully cleared throughout the morning and by late afternoon the stunning backdrop of the Mendip Hills was illuminated by a spot of sunshine!

Race 1 got underway with a light WSW wind.  A marginally port biased start rewarded those that could get away cleanly and clear their air. A long and mentally fatiguing race ensued! Visiting sailor Ed Higson (Bartley SC) eventually came through to win, followed by top CVLSC sailors Julian Cooke and Peter Sherwin.

In the Radial fleet there were huge gains to be made on the right hand side of the beats, particularly on lap 2. Allen Marsh (CVLSC) read the environment perfectly to bypass early leader Steve Smith and win by a huge margin (well-done Allen – first ever open race win!), followed by Ellie Cumpsty (CVLSC) and visiting youth squad sailor Deborah Hughes (Upper Thames).

Race 2 brought an even lighter breeze, this time westerly. The advantage was perhaps more often on the left side of the upwind legs this time. Albeit a timely veer in lap 2 livened up the leading pack! Once again Higson sailed with composure to emerge with the win, bagging the standard trophy with 2 bullets now secured with only one race remaining. CVLSC sailor Richard Cumpsty took second followed by Sherwin.

In the Radials Steve Smith got away and took the R2 honours with a comfortable margin. Local CVLSC lady sailors Helen Martin and Laura Smith sailed superbly to finish ahead of the squad sailors, grabbing the 2 remaining podium places (well done ladies!).

By Race 3 the wind was moving between NW and WNW. Extremely testing conditions struck shortly after the start – with zephyr light airs dealing the ‘deck of sailing cards’ seemingly randomly to the sailors. This upset the pecking order nicely for at least the first few legs!

Normal service was to be restored though by the finish. Cooke read and exploited the conditions best to lead the standard fleet home, followed by Cumpsty and Jon Lewis (CVLSC).

In the Radials, Ben Hawkes (CVLSC) led at the windward mark followed closely by Deborah Hughes. A mistake at the leeward mark by Hughes allowed fellow youth squad sailor Freya Cumpsty to take control, and she doggedly resisted a late charge through the fleet by Smith to take the win. Hawkes deservedly bagged the remaining podium spot.

There was great close racing throughout the fleets all day with the unstable conditions providing plenty of opportunity for gains and losses. Competitors also enjoyed time a drink or two on the sunny patio after sailing!

Many thanks to the race and event teams for putting on such a great show. See you all again next year!